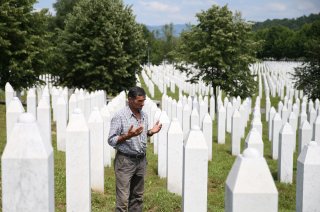 As befits a successful peace agreement, the November 1995 Dayton accords that ended the Bosnian war were marked on their twenty-fifth anniversary with a flurry of international conferences. Oddly enough, even though a general acknowledgment that the accords have kept the peace, most recommendations call for radically “revising Dayton,” on the grounds that Bosnia’s institutions are too cumbersome, prone to corruption and politically unfair to minorities. Even more oddly, many proposals have been made to address these problems by dismantling the very structures that have brought and maintained peace. Instead, NATO forces are supposed to impose upon the Croats and Serbs of Bosnia, half the population and majorities in 60 percent of its territory, the centralized state that they went to war to prevent. Since there are no indications that many Croats and Serbs will accept this, NATO troops would likely be regarded by them as an occupying force, a role that has not worked well in Afghanistan or Iraq.

The constitution of Bosnia & Herzegovina (B&H) that was included as annex 4 of the Dayton agreement is certainly complex. It divided the country into sub-territories, almost all of them dominated by only one of the country’s three main ethno-national communities: Bosniaks (known until 1993 as Muslims), Croats and Serbs.  These ethno-polities are linked in a confederal structure, with the central government holding very little authority, and even that conditioned on rarely achieved consensus from the representatives of the three communities.  Almost all governmental power resides at the levels of the ethno-territorial “entities”, one Serb, the other Bosniak and Croat, and within this last, among ten cantons, five Bosniak, three Croat, and two mixed.

Yet constitutionalizing the ethno-territorial separation of these three communities was the key not only to ending the war but to keeping the peace. The year 2020 was also the thirtieth anniversary of the free and fair elections at the end of communism, when the population of B&H partitioned itself into three mutually exclusive constituencies, Bosniak, Croat and Serb. A single party of each won almost all votes from that community, while those promising a social democracy of equal citizens did very poorly.  Since Bosniaks comprised 43 percent of the population, Serbs 34 percent and Croats 17 percent, forming a joint state would only be possible if the members of these communities agreed to it. Tragically, but not surprisingly, they did not: while Bosniaks wanted a strong central government, Croats and Serbs fought the war in order to avoid having such a centralized state imposed upon them. They accepted inclusion in B&H at Dayton only because the central government has very little authority over them.

Critics argue that this system of ethno-territorial power-sharing is undemocratic because it blocks citizens from forming non-ethnic majorities and makes it impossible for minority members to run for some offices. They also argue that corrupt ethno-national elites exploit the weakness of the central state in order to enrich themselves. And finally, they assert that the ease of blocking consensus prevents the central government from taking supposedly necessary decisions, notably joining NATO.

Bosnia’s many problems, however,  are not due to the Dayton constitution, or to its lack of accession to NATO. On Transparency International’s 2109 Corruption Perceptions Index, BiH scored better than NATO members Albania and North Macedonia, only slightly worse than Serbia and NATO founding member Turkey, and far better than Iraq and Afghanistan, where the long-term U.S. occupations have led to less viable states than B&H. None of these other countries has the Dayton system, though perhaps Iraq would have done better if then-Senator Joe Biden’s 2006 proposal to use Dayton as a model for its restructuring had been implemented.

And those putative anti-nationalist citizens who are disenfranchised by Dayton’s ethno-confederalism are very rarely found outside of debates in policy circles.  In the 2013 census, nearly 97 percent of the population declared themselves Bosniak, Croat, or Serb. Only 1 percent declared themselves to be ethno-nationally neutral “Bosnians.” The three mutually exclusive ethnonational constituencies thus accurately reflect the social divisions of the society.

The war that was ended at Dayton was fought by three ethnoreligious armies and for three different countries: the overwhelmingly Muslim Army of B&H for all of Bosnia, including those places with few Muslims; the Army of Republika Srpska for a Serbian Fatherland composed of only parts of B&H, and the Croatian Defense Council for a Croatian Homeland that included only other parts of B&H. The territorial divisions at Dayton mainly followed the front lines between these forces, whose dead are now commemorated separately, and rarely in the same town, as Muslim “martyrs” (šehidi, from Arabic), or Croat “defenders,” or Serb “fighters.”

The Dayton constitution essentially proclaimed this house divided to be a condominium, despite two of three tenants rejecting co-ownership. The condominium can be continued only if those two tenants, the Croats and Serbs of B&H, are satisfied that the third one will not try to take over their parts of the house. Most of the proposals being made by denizens of U.S. think tanks to “fix Bosnia” are to have NATO help the Bosniaks in such a takeover, by imposing a centralized government on the Croats and Serbs. It is difficult to imagine a better way to destabilize Bosnia. It is even more difficult to find a defensible reason for such proposals.

Robert M. Hayden is a professor of anthropology, Law and Public & International Affairs, at the University of Pittsburgh. He has done research on Yugoslavia for forty years; among his many publications is Blueprints for a House Divided: The Constitutional Logic of the Yugoslav Wars.