The Case for a Strategic Pivot to Greece and Cyprus 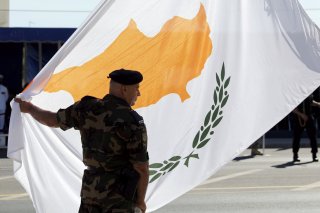 Though it was lost in the headlines surrounding the U.S. presidential election, the Navy just recently announced one of its ships would call Greece home for the first time since the Cold War. The base, at Souda Bay, is ideally situated for a U.S. naval presence. Its deepwater port on the island of Crete is in the heart of the increasingly important and contentious Eastern Mediterranean. The newly homeported ship, the USS Hershel Williams expeditionary sea base, will project U.S. power and provide a much-needed signal of Washington’s intent to remain a regional player.

But this move, welcome as it is, should be a point of departure and not the culmination of closer bilateral ties. Greece is the pivot point in the Eastern Mediterranean, which is rapidly reemerging as a major geopolitical flashpoint after decades of relative calm. This should come as no surprise. As the “sea between the lands,” the region is the strategic crossroads of Europe, Asia and Africa, and thus home to recurrent conflict since the Greco-Persian wars 2,500 years ago.

Yet the current troubles are of more recent vintage. Israel, Cyprus and Egypt have made some of the largest combined offshore energy finds anywhere in the world over the past decade. Meanwhile, Turkey has shifted markedly under President Erdoğan, from a reliable NATO ally to a disruptive Islamist-nationalist regime. The further Turkey heads in this direction, the more it pursues a militarized foreign policy, premised on use of force to overthrow the regional status quo. And for the first time since the Cold War, great-power competition is back in the Eastern Mediterranean, thanks to Russia’s military presence in Syria and Libya as well as the region’s crucial location for China’s Belt and Road Initiative.

These trends are worrisome for the United States, and in part, enabled by limited engagement from Washington. The coronavirus-related global economic downturn is stalling regional energy development, which undermines American ambitions to reduce Europe’s dependence on Russian natural gas. Turkey is contributing to the regional angst, using gunboat diplomacy to stake its own dubious claims to these resources. And there remains a real risk that Ankara and Moscow simply divvy up Libya between them, giving both countries dangerous footholds on Europe’s southern flank.

Enter Greece. It is a more than willing NATO ally, doing its part through burden-sharing and spending on defense. It has been pivotal in initiating greater diplomatic cooperation among our regional allies. And its location is ideal for shipping energy and projecting U.S. power throughout the Eastern Mediterranean—first and foremost via Crete—and farther afield into the Balkans, Black Sea, Middle East and North Africa.

In this light, stronger ties with Greece become a force multiplier for the United States and could enable Athens to effectively displace Ankara as NATO’s southeastern bulwark. Increased U.S. military rotations through Greek bases could provide a platform for operations around the region. These also would reinforce shared deterrence against Russia in Eastern Europe and could contribute to taming Turkish saber-rattling in the Aegean. The two countries also could work together on naval shipbuilding, expanding the strategically vital Souda Bay base (which currently operates near capacity) and even integrating Greek naval forces with U.S. carrier groups in the region.

Much as Israel already does in the Middle East, Greece can also do much more on its own to support U.S. interests in the Eastern Mediterranean, if given the proper tools. Last year Congress authorized $3 million in defense assistance for Athens to buy U.S. weapons systems; while commendable, it also is insufficient to meet growing challenges. Greater defense assistance would enable long-overdue expansions and upgrades to Greece’s air and naval fleets, while also supporting U.S jobs.

In parallel, U.S. officials should explore options to strengthen security cooperation with nearby Cyprus. Like Crete, this strategically located island presents an ideal platform for power projection, and stronger U.S. ties could enable Greece to focus more concertedly on other missions since Athens currently bears much de facto responsibility for Cypriot defense.

Should push come to shove, the United States also should make clear it is developing contingency plans to relocate military assets currently deployed in Turkey to Greece or Cyprus. This could provide leverage to change Ankara’s behavior, and ensure reliable basing for these forces if Erdoğan follows through on threats to deny access.

Bolstered defense ties should be synchronized with revamped American diplomatic leadership in the Eastern Mediterranean, both to prevent Turkey and Russia from deciding Libya’s future between themselves and to step in where Europe thus far has struggled to soften Turkish-driven tensions over regional energy resources.

Good friends can be hard to find, especially in difficult times like these. Fortunately for the United States, it has an enthusiastic ally looking to do more in an increasingly troubled but important part of the world.

Adm.Kirkland H. Donald (retired) is a former director of the Naval Nuclear Propulsion Program and is a member of the Eastern Mediterranean Policy Project at the Jewish Institute for National Security of America, where Jonathan Ruhe is Director of Foreign Policy.