A Ceasefire Can Ensure Ukrainian Independence 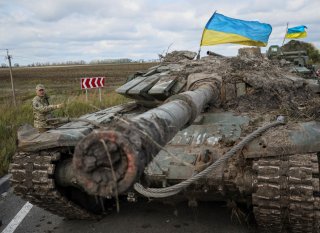 On September 21, Russian president Vladimir Putin gave a televised address announcing support for annexing four Russian-occupied Ukrainian oblasts. He also called for a military mobilization and repeated his threat to use nuclear weapons to defend Russia’s territorial integrity. Following his remarks, former president Dmitri Medvedev clarified that Russia’s nuclear deterrent covered the occupied territories of Luhansk, Donetsk, Kherson, and Zaporizhia, and stated that he did not believe NATO would respond militarily to Russian limited nuclear escalation in Ukraine.

After the rigged referendums conducted by Kremlin-appointed leaders this week indicated that an overwhelming majority supported unification with Russia, Putin hosted a ceremony at the Kremlin this morning declaring all four Ukrainian oblasts a part of Russia. Annexing these territories will increase Russia’s population by approximately 6 million people and effectively mark the end of Russia’s so-called “special military operation,” which has been a war fought for limited objectives and with a fraction of its armed forces. But the start of a full-scale war against Ukraine after mobilization is likely to be even more destructive and could potentially include some of Russia’s powerful but not yet utilized unconventional weapons, with the objective being the total capitulation of Ukraine.

Following the successful Ukrainian counteroffensive in Kharkiv earlier this month which resulted in the liberation of nearly 6 percent of Russian-occupied territory, Western leaders continue to overestimate Ukraine’s chances of winning the war. Reports indicate that Putin’s partial mobilization will not be limited to 300,000 troops, as the Russian government has misleadingly claimed, but rather 1.2 million military reservists that will be used to overrun Ukraine in a planned winter offensive that could bring an end to the country’s independence by early next year.

Even after Putin’s dramatic escalation of the war, the Russian government has declared it continues to remain open to peace negotiations with Ukraine. The Ukrainian government refuses to meet with Russian representatives to negotiate an end to the war, no doubt due to the West’s continued military support. Unfortunately, however, the likelihood of Ukraine gaining more territory is minimal and, even if achieved, could result in a Russian nuclear response. It is likely that no increase in Western weapons shipments to Kyiv will be sufficient to prevent it from being overwhelmed by the massive increase in the number of Russian troops fighting in Ukraine. Accordingly, the momentum in the war is about to shift definitively in Russia’s favor. Now is the time to lock in Ukraine’s battlefield gains, which have seen its forces liberate four out of eight Russian-occupied regions.

There is only one way the West can prevent Ukraine from being defeated on the battlefield over the next several months and avoid a nuclear conflict with Russia: a return to diplomacy. President Joe Biden needs to call for an immediate cease-fire and armistice agreement to save Ukraine, ensure its security, and preserve its political and economic independence with control of at least 81 percent of its territory. It is in the U.S. national security interest to have Russia and Ukraine negotiate a permanent cease-fire as soon as possible and avoid potential nuclear escalation. The Biden administration should offer to not implement new economic sanctions against Russia, stop sending more U.S. troops to Eastern Europe, and suspend lethal military assistance to Ukraine in exchange for an immediate and sustained Russian ceasefire. A relaxation of sanctions following a peace deal would provide economic relief to millions of Americans suffering from a recession triggered by Western sanctions against Russia.

The terms of the armistice agreement would be as follows.

1. All hostilities between the Russian Federation and Ukraine will cease immediately.

2. All Western lethal military assistance to Ukraine will be suspended so long as Russia honors the terms of the armistice agreement.

3. Russia will immediately suspend its Black Sea blockade of Ukraine.

5. All prisoners of war (POWs) will be returned to their home country.

6. United Nations (UN) peacekeepers from neutral countries will be deployed along the line of control where fighting has occurred in recent weeks. (Optionally, a four-kilometer wide demilitarized zone could be created along the borders of the four Russian annexed Ukrainian regions.)

7. Delegations from the Russian and Ukrainian governments will convene a conference immediately in Istanbul, Turkey to resume negotiations for a peace agreement where both parties left off when Ukraine withdrew from the negotiations in April.

While writing this proposal, one of the provisions of the proposed armistice agreement I included was that Russia would resume natural gas shipments to the European Union via the Nord Stream 1 or Nord Stream 2 pipelines. But on September 27, both of them were severely damaged by acts of sabotage that appear to be retaliation against Russia. It is unclear which country is responsible for damaging the pipelines but reopening them might have saved thousands of Europeans from freezing to death this winter. The day after the pipeline attacks, former President Donald Trump offered to mediate peace talks to end the war in Ukraine out of concern that sabotaging the pipelines might spark “World War III,” particularly if Moscow believed that the United States or another NATO member was responsible.

An armistice agreement would end the fighting and allow over 7.5 million Ukrainian refugees to return home and begin the process of reconstruction and economic recovery. If Russia violated the armistice agreement, the United States and NATO would re-impose sanctions and resume sending lethal aid to Ukraine. If Ukraine resumed hostilities with Russia, the West would suspend all economic support for Kyiv, including funding for reconstruction. As part of the agreement, the West would agree to only lift sanctions on Russian food and fuel exports to help fight inflation. The objective of this agreement would be to avoid the “frozen conflict” that resulted from the Minsk agreements and find a genuine end to the war.

While Ukraine stands the most to gain from an armistice agreement, every nation involved in the conflict could legitimately claim victory. Western leaders and Ukrainian president Volodymyr Zelenskyy could assert that they expelled Russian forces from four Ukrainian oblasts. Putin could claim “mission accomplished” for Russia’s special military operation. Ending the war as quickly as possible will save the lives of tens of thousands of Ukrainians and prevent the country from being overrun by Russian forces.

David T. Pyne, Esq. is a former U.S. Army combat arms and Headquarters staff officer, who was in charge of armaments cooperation with the former Soviet Union, Eastern Europe, the Middle East, Africa and the Americas from 2000-2003, with an M.A. in National Security Studies from Georgetown University. He currently serves as Deputy Director of National Operations for the Task Force on National and Homeland Security and is a contributor to Dr. Peter Pry’s book “Blackout Warfare” as well as the upcoming book “Will America Be Protected?” which is due to be released later this year. He also serves as the Editor of “The Real War” newsletter at dpyne.substack.com. He may be reached at [email protected].