Chaos in the Caucasus: Why a New Regional War Would Be Catastrophic 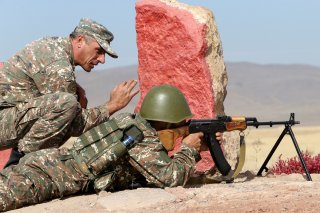 Armenians have blasted Israel for arming Azerbaijan with sophisticated weapons, rendering Armenian defenses near obsolete. The recent violent flare-up between the two countries over the disputed area of Nagorno-Karabakh underscored Israel’s qualitative cutting-edge arms in Azeri hands. Correspondingly, Arayik Harutyunyan, the president of the self-declared Artsakh Republic, the Armenian designation of Nagorno-Karabakh, accused Israel of complicity “in Azerbaijan’s genocidal policy, despite being a nation that survived genocide.” Notwithstanding the dissemination of conspiracy theories incriminating Israel, Jerusalem’s strategy of arming Baku is not directed at Armenia. Israel has good relations with both Armenia and Azerbaijan that are not mutually exclusive. A closer examination reveals that Jerusalem’s goal of arming Baku lies primarily in the geostrategic objective of countering Iran, enhancing the economic relationship with energy-rich Baku, and establishing religious and cultural ties with Baku’s Jewish community. Nevertheless, the danger of the conflict devolving into regional war may inevitably be harmful for Israel’s security and strategy in the South Caucasus.

Historically, Azerbaijan was ruled by the Babylonians, Persians, Greeks, Arabs, Mongols, Ottomans, and Russians. The etymological root of the word Azerbaijan derives from the word “Azar” which means in Persian “holy fire” and “Baijan” which means the “Place of.” Azerbaijan became independent for a short period of time (1918–1920) following the collapse of Tsarist Russia. Thereafter it became a republic in the former Soviet Union. Significantly, in 1923, Moscow recognized the Armenian majority Nagorno-Karabakh (NK) as an autonomous republic within the Soviet republic of Azerbaijan. As the Soviet Union embraced the policies of perestroika (restructuring) and glasnost (opening) in the 1980s, NK petitioned Moscow to become part of Armenia, whereupon an ethnic conflict erupted between Armenians and Azeris.

In fact, fighting raged between the two countries as both gained their independence following the disintegration of the Soviet Union. The United States, Russia and France, co-chairing the Minsk Group, brokered peace talks that resulted in a cease-fire agreement signed in 1994. However, the cease-fire did not resolve the conflict. NK Armenians, supported by Armenia, controlled most of NK and few surrounding Azerbaijan territories. Azerbaijan rejected the status quo. During the conflict, whereas Russia and more or less Iran supported Armenia, Azeris looked up to Turkey, as a cognate Turkic nation, to counterbalance Russian and Iranian support of Armenia. Azerbaijan also sought the provision of Israeli arms, as well as Jewish backing in the United States to counter the influence of the Armenian-American lobby there. It’s noteworthy that though both Azeris and Iranians embrace Twelver Shi’a Islam, Iran has always worried about the Azeris’ ethnic identification with Turkey and/or a rise of ethnic consciousness among Iranian Azeris. Iran has a large minority of Azeris, known as “Southern Azeris” because they live adjacently to the southern border of Azerbaijan.

Azerbaijan’s opening to Israel was more or less instigated and enthusiastically reciprocated by Israel. Azerbaijan offered Israel a geostrategic border country to Iran which Jerusalem already by then perceived as a strategic threat. Moreover, Azerbaijan is the home of approximately twelve thousand Jews, the plurality of them live in Baku. In fact, Azerbaijan’s robust Jewish community played a key role in improving Azerbaijan-Israel’s relations and reinforcing Baku’s need for friendly regional powers to ballast the country’s relationship with neighborly countries.

Similarly, Azerbaijan-Israel economic relations have progressively advanced in the medical, agricultural, and energy fields. Global Israeli companies specializing in irrigation, agriculture, and wastewater, such as Netafim and Tahal, are prominently active in Baku. Israel also imports a sizable amount of oil from Azerbaijan following the completion of the Baku-Tbilisi-Ceyhan pipeline in 2006. Plans have been made to connect this pipeline with the Eilat-Ashkelon pipeline, which has recently been renamed the Europe-Asia pipeline to reflect a new focus of connecting crude cargoes from Black Sea ports.

Apparently, oil and security have played a key role in the expansion of the Azerbaijan-Israel strategic cooperation. This was reflected by the next major turning point in the Azerbaijan-Israel relationship consequent upon President Shimon Peres’s visit to Baku in 2009. Significantly, executives of Israel’s major defense companies accompanied the president. The outcome of the visit and its follow-up negotiations culminated in a $1.6 billion arms deal in 2012, according to which Jerusalem would provide Baku with sophisticated drones and missiles and advanced aerospace technology. This was followed by another major $5 billion arms deal in 2016, providing Baku with weapons, security equipment, and missile-defense systems.

Commenting on the recent outbreak of conflict in NK, Seth Frantzman, an astute editor at the Jerusalem Post, asserted that the war that broke out in September 2020 “has been defined by a unique type of fighting: Azerbaijan’s use of armed drones against Armenia’s tanks, artillery, and military vehicles.” Azerbaijan deployed hundreds of sophisticated drones that damaged significant Armenian defense positions and equipment. These sophisticated drones, known by defense companies as “loitering munitions” fly into enemy positions employing the drone itself as the warhead. According to the Center for the Study of the Drone at Bard College, Azerbaijan had acquired Israel’s most deadly Harpy, Harop and Orbiter 1 K loitering munitions.

No doubt, Israel’s qualitative military support and cooperation with Azerbaijan, which has transformed the way by which wars are waged, led to the Armenian outcry and accusation of Israel of “complicity in genocide.” Conversely, one could safely argue that Israel has successfully embedded its military and intelligence presence in Baku to counter what Jerusalem perceives as Iran’s strategic threat. Debatably, Jerusalem can target Iran’s missile sites and intercept its missiles, spy on Iran’s military leaders and logistics, map out Iran’s communications, carry out deep attacks and extrajudicial assassination inside Iran, and foil Iranian (or Hezbollah) terror attacks.

In February 2012 Tehran accused Azerbaijan of harboring Israeli intelligence agents who crossed into Iran to carry out the extrajudicial assassination of Iranian nuclear scientists. In late March 2012, Azerbaijan authorities, apprised by Israel’s intelligence, arrested two dozen terrorists trained in Iran, who had planned terror attacks on the Israeli and U.S. embassies in Baku. To some analysts and intelligence experts, it is an open secret that Israel has used Azerbaijan as an intelligence hub and a launching pad against Iran’s scientists and military and nuclear installations.

Obviously, Israel’s strategic military and economic cooperation with Azerbaijan has been beneficial in some respects for both countries. However, the ongoing strife is changing the configuration of the war between Armenia and Azerbaijan, potentially leading to a regional war and uncertain ramifications for Israel’s national security. Turkey, unlike in the past, has taken a vocal and active role in supporting Azerbaijan. Turkish President Recep Tayyip Erdogan vowed to continue the struggle until the end of the NK occupation. He proclaimed that “Turkey stands with and will continue to stand with friendly and brotherly Azerbaijan with all our means and all our heart.” No sooner, Pakistan’s foreign ministry pledged its support of Azerbaijan. Alternatively, Russia and Iran lend their support for Armenia. Most recently, a Russian brokered cease-fire has collapsed, inviting foreign intervention in the NK conflict. Whereas Russia, Iran, and India support Armenia, Israel, Turkey, and Pakistan support Azerbaijan.

This configuration does not bode well for Israel. Jerusalem finds itself in the company of odd and adversarial fellows. Pakistan does neither recognize Armenia nor Israel. And Turkey has been highly critical of Israel, trying thus far unsuccessfully to isolate Jerusalem. Jerusalem maintains a warm and close relationship with Moscow, manifested in their cooperation in Syria. No doubt, in the event of a regional war over NK, Turkey would try to limit or crowd out Israel’s role in the South Caucus, fearing a growth of its influence there. On the other hand, Russian cooperation with Israel may cease given the importance of Armenia to Russian national security, save Armenia being a member, unlike Azerbaijan, in Russia’s Nato-like Collective Security Treaty Organization. Most importantly, this realignment of forces may bring Iran and Russia closer together, expanding their strategic cooperation in the greater Middle East. This falls in line with their respective anti-American outlooks in the region. Paradoxically, Moscow and Ankara would have an interest in pressuring Baku to regulate its relationship with Jerusalem. No less significant, Israel has deepened its relationship with a country ruled since its independence by the corrupt regime of the Aliyev family.