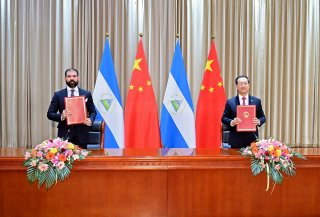 Nicaragua’s Ministry of Foreign Affairs formally dropped its diplomatic recognition of Taiwan and established relations with China last week. “The People’s Republic of China is the only legitimate government that represents all of China, and Taiwan is an inalienable part of Chinese territory,” the ministry said in a statement.

The decision is a major blow to the island-state and a major diplomatic victory for Beijing. The change in diplomatic recognition also indicates that China continues to make inroads into Latin America and the Caribbean at the expense of the United States in the new Cold War in which Beijing and Washington are engaged.

Only fourteen countries still formally recognize Taiwan. That could change if Honduras was to flip, which is a distinct possibility. The situation becomes even bleaker if any of the remaining Caribbean and Latin American countries can be flipped. Those remaining loyal (thus far) to Taiwan are Honduras and Guatemala in Central America, Paraguay in South America, and Belize, Haiti, St. Vincent and the Grenadines, and St. Kitts and Nevis in the Caribbean.

Chinese president Xi Jinping and the Communist Party regard Taiwan as a breakaway province and have every intention of effecting an eventual reunification, whether or not the inhabitants of the island want that to occur. Taiwan’s very existence as an independent democracy at the doorstep of the mainland is a threat to a Chinese Communist Party that has a firm belief in the Leninist idea of single-party rule. Consequently, China has long pursued a campaign to erase any acknowledgment of Taiwanese sovereignty by other countries and corporations. To achieve this objective China uses market access for businesses and the lure of foreign aid for countries in return to the adherence to a “one China” policy, which effectively means all diplomatic relations are with the People’s Republic of China (PRC) and an end to recognition of Taiwan.

China embarked upon a more intense campaign to seriously erode Taiwan’s diplomatic standing in 2016 when the pro-independence Tsai Ing-wen became president. She identified two key issues in her victory speech. First and foremost, she underscored Taiwan’s commitment to democracy, calling it a value “deeply engrained [sic] in the Taiwanese people.” This, of course, highlights a major difference between Taiwan’s democratic and China’s authoritarian political systems. The second issue was the tenuous relationship with Beijing. President Tsai carefully noted that both sides “have a responsibility to find mutually acceptable means of interaction that are based on dignity and reciprocity” that ensures “no provocations or accidents.” Xi has intensified military and diplomatic pressure on Taiwan since then, both by using the threat of military force (by frequently violating the island’s airspace) and attacking Taiwan’s diplomatic representation.

Although the United States officially recognizes the PRC as the representative of China, it also is a major supporter of Taiwan. American military forces periodically balance Chinese threats against the island, and the U.S. government sells Taiwan sophisticated weaponry. Consequently, China’s gains in Latin America and the Caribbean give it an opportunity to counter U.S. actions in Asia, such as American support for Taiwan and democratic protesters in Hong Kong as well as keeping the South China Sea an open waterway.

By making astute use of economic statecraft China has extended its Belt and Road Initiative (BRI) into the Americas, offering trade opportunities and substantial financial largesse, especially in infrastructure. The region has also grown important to China as it seeks to secure raw materials such as oil, ores, and minerals. Thus far, nineteen countries in Latin America and the Caribbean have signed up for the BRI, including Chile, Peru, Costa Rica, Panama, Jamaica, Trinidad and Tobago, and Antigua and Barbuda.

China has also been quite willing to sell military hardware and high-tech surveillance systems to Latin American and Caribbean governments, run disinformation, misinformation, and propaganda operations against the United States and its allies in the region, and support anti-U.S. regimes like Cuba and Venezuela. The Chinese narrative is that China is a good economic partner, has a successful development model (a combination of statist capitalism and authoritarianism), and is willing to invest in regional development. This is meant to paint a sharp contrast to the United States, which state-owned publications such as Xinhua and the Global Times stress is riven by racial violence, high crime rates, and poverty. China also cites a meager response from the American government to the Covid-19 pandemic in Latin America and the Caribbean.

China’s economic statecraft has been effective in pulling away countries from Taiwan, especially recently in Central America and the Caribbean. Panama, a long-time Taiwanese ally, defected to China in 2017. El Salvador and the Dominican Republic followed in 2018. Now Nicaragua has done the same. In each case, economic considerations dominated. When El Salvador changed sides, its then-President Salvador Sánchez Cerén proclaimed the “extraordinary opportunities” that would come with recognizing China. Indeed, other Central American leaders are aware of the inflow of development projects into Panama following that country’s diplomatic flip.

To be certain, China’s rising role in Latin America and the Caribbean has not been without problems. There have been complaints about the use of Chinese labor over local workers, a disregard for environmental regulations, often opaque corporate balance sheets, and a willingness to use bribery. China’s record of actually finishing projects is not as good as it advertises. Moreover, large Chinese state-owned companies, often in the energy and mining sectors, have demonstrated difficulty in dealing with indigenous communities, having come from a business culture that stresses leader-to-leader arrangements over community outreach.

Yet the potential for Chinese assistance to help fund major infrastructure projects remains attractive. This is especially the case considering that aid from the United States and other Western countries has become scarcer since the 2008 financial crisis. Foreign aid from the United States also requires greater transparency and disclosure as well as feasibility and environmental studies.

The United States and Taiwan are keenly aware of China’s penetration of Latin America and the Caribbean. Under the Trump administration, U.S. pressure on the region not to abandon Taiwan and resist Chinese promises increased. As part of the response, Washington launched its Growth in the Americas Initiative (better known in the region as América Crece), which highlights U.S. private sector expertise in infrastructure development. It also lectured the region on the dangers of China’s debt-trap diplomacy whereby Beijing gains influence by intentionally over-lending and taking control of assets in the case of problems with debt payments.

The Biden administration lacks a comprehensive approach to Latin America and the Caribbean. Thus far the Build Back Better World (B3W), which intends to be a broader version of the Amérca Crece, appears to be the main attraction. At the same time, the Biden administration has promised a $4 billion aid package to Central America, in particular, the Northern Triangle countries of El Salvador, Guatemala, and Honduras. These are some of the poorest countries in Latin America and the main source of immigration pressure on the U.S. southern border.

For its part, Taiwan is also seeking to stem the tide. In 2019, President Tsai made a four-day visit through the Caribbean, touching down in Haiti, St. Kitts and Nevis, St. Lucia, and St. Vincent and the Grenadines. Even in these countries, where Taiwan had made an effort through trade and various projects, the pressure on flipping is significant, largely for economic reasons. Among the fifteen members of the Caribbean Community, also known as CARICOM, the majority recognize China over Taiwan.

China is also exceedingly sensitive to any perceived move away from its “one China” policy, something that Guyana discovered to its discomfort. In early 2021, Guyana agreed to allow Taiwan to establish a trade office, which China immediately read as a de facto embassy. China’s foreign ministry promptly notified Guyana that it hoped it would not engage in official ties with Taiwan, calling on the Caribbean country to “earnestly take steps to correct their mistake.” Guyana, which trades with China and needs its investment in infrastructure, rapidly complied. Later in 2021, the Guyanese government announced that it was contracting the China Railway Group to build and fund the off-again, on-again Amaila Falls hydroelectric project, which could need around $1 billion in new loans.

Honduras will be a challenge for Taiwan and, for that matter, the United States. Xiomara Castro, the wife of former left-wing President Manuel Zelaya (who was ousted in a coup in 2009) won the November 2021 presidential election. She is known to have close ties to Venezuela’s infamous dictator pro-China Nicolás Maduro and has been a vocal anti-American voice in the region in the past.

It will take more than a congratulatory tweet by President Tsai to keep Honduras as a diplomatic partner. By ditching Taiwan and embracing China, President Castro could assert Honduras’s independence vis-à-vis the United States and unlock badly needed funds for development projects. According to U.S. Army War College Strategic Studies Institute Latin American expert Evan Ellis: “In economic terms, if Honduras joins Nicaragua and El Salvador in recognizing the PRC, its decision will create synergies for PRC-driven logistics projects around the Gulf of Fonseca, improving the chances for a new port at La Unión, the improved dry canal corridor from Tigre Island to the Atlantic Coast of Honduras, and a connection to Nicaragua.”