China Looks to the Arctic to Avoid Another Suez Slowdown 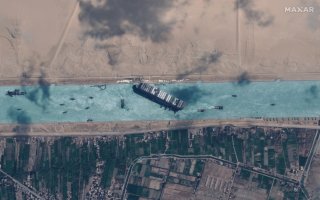 As the events in the Suez Canal over the past week have reminded us, the world’s great sea lanes—the arteries through which flows the lifeblood of the global economy—are defined as much by chokepoints as by open waters. Some of these chokepoints are well known: the Panama Canal, the Straits of Gibraltar, the Strait of Hormuz, and the Suez Canal itself. Others figure somewhat less prominently in our collective geographic imagination: the Strait of Molucca, the Turkish Straits, the Bab el-Mandeb or Gate of Tears, and the Lombok Strait. But make no mistake: whether well-known or not, choke points define the world’s seaway, and keeping those chokepoints unobstructed is a core interest of any nation that depends on seaborne trade for its wealth and wellbeing.

Again, as the events of the past week or so have made us keenly aware, accidental blockage of one of these chokepoints is an ever-present risk. There is always the possibility that a container ship or tanker will come to grief and obstruct one of the narrower choke points. But the real danger, the one that keeps both maritime insurance companies and naval strategic planners up at night, is the prospect of the purposeful closure of such choke points by military force, either during war or in conflicts short of war. These choke points can be pinched shut in times of conflict by mines, missiles, or blockades. This is much easier to do than controlling the high seas or denying access to those seas. And even the prospect of heightened tensions in places like the Strait of Hormuz can send maritime insurance rates skyrocketing. Should any of these vital passageways be closed due to a deliberate act of war, the geopolitical and economic consequences could be cataclysmic. And if they are closed by one party to a conflict at the expense of another.

It is against that backdrop that one must view the People’s Republic of China’s recent interest in the Arctic.

In January 2018, China introduced its Arctic Policy, which declared that China is a “Near Arctic” state. The document goes on to call for greater Chinese participation in “resource exploration and exploitation” in the region, and a greater role for China in regional forums. Beyond that document, China has also made clear that it envisions a greater role for the Chinese military in securing China’s polar interests. Simply put, China now sees itself as an active participant and major stakeholder in Arctic affairs. It also recognizes that it needs to develop the power projection capabilities—forces, basing infrastructure, etc.—that would enable it to fulfill its Arctic vocation.

The logic behind this new policy is twofold. On the one hand, there are considerable oil, natural gas, and other natural resources that are becoming increasingly accessible as the Arctic ice melts. Various studies, for example, show that the Arctic contains an estimated 22 percent of the world’s undiscovered fossil fuel resources, with perhaps 90 billion barrels of oil and 1,670 trillion cubic feet of natural gas located beneath the region’s disputed international waters. And the region also contains considerable deposits of rare earth elements (REEs)—minerals essential to cutting-edge military, computing, and environmentally-friendly technologies, such as electric vehicles, wind power turbines, and solar panels. China sees both commercial and strategic opportunities in the Arctic and is positioning itself to exploit those opportunities.

On the other hand, and at least equally importantly, Beijing is interested in the Arctic because it offers a less vulnerable route to the European market. At the moment, the vast majority of China’s trade with the Middle East, Africa, and Europe must pass through at least two of the world’s maritime chokepoints. The route to the Persian Gulf involves transiting both the Strait of Malacca and the Strait of Hormuz. Similarly, to sail from Shanghai to the Mediterranean, a ship must pass through the Strait of Malacca, the Gate of Tears, and the Suez Canal. At each of these chokepoints, transit can be denied by both hostile states and non-state actors.

Recognizing the strategic vulnerability inherent in this situation, Beijing has naturally begun seeking alternatives. One approach has been to invest in alternative overland trade routes through its Belt and Road Initiative. Another has been to build pipelines and transportation infrastructure linking the Pakistani port of Gwadar to Western China. And Beijing has aggressively courted the Panamanian government in order to secure Chinese access to the canal. China has even proposed building a canal through the Kra Isthmus in Thailand with the aim of bypassing the Straits of Molucca. Finally, Beijing has increased the size, capability, and reach of the People’s Liberation Army (PLA) Navy and developed the “String of Pearls”—a network of Chinese military and commercial facilities extending from the Chinese mainland to Port Sudan in the Horn of Africa—to support its efforts to keep Chinese maritime trade flowing across the Indo-Pacific region.

But perhaps the most ambitious approach has been to seek a route to Europe and onward that avoids all the major choke points from Shanghai to Piraeus, a route that is far less vulnerable to interdiction by hostile powers. This route, literally running across the top of the world, is the Transpolar or Trans-Arctic Route. Unlike the Northern Sea Route, another alternate Arctic passage that runs along Russia’s Arctic coastline and within Russian waters, the Transpolar Route is almost entirely in international waters. It runs from the Atlantic Ocean to the Pacific Ocean across the center of the Arctic Ocean, passing close to the North Pole. While currently navigable only by heavy icebreakers, and, therefore, not suited to commercial sea traffic, the shrinking of the polar ice cap means that by 2030 it will be passable by commercial vessels.

Such a route has compelling commercial advantages. For journeys between Europe and China, the Northern Sea Route can already be two to three weeks faster than the Suez Canal. By cutting straight across the Arctic, the Transpolar Route could save an additional two days. But it also offers something at least as important: the strategic advantage of not passing through any of the world’s major chokepoints.

Only time will tell if the Transpolar Route will pan out—if climate change and a shrinking polar ice cap will make this a truly viable maritime superhighway. But Beijing is betting it will. And the recent events in the Suez may well result in China doubling down on that bet.

Andrew Latham is a professor of political science at Macalester College in Saint Paul, Minnesota; and a Research Associate with the Centre for Defence and Security Studies, Canada. He has a Ph.D. in Political Science, with a concentration in International Relations and Strategic Studies.