China Strikes Back: Great Power Rivalry Has Come to the Middle East 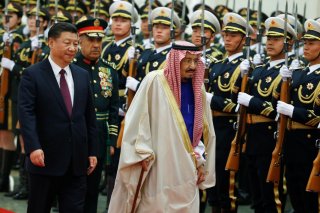 The Middle East’s reemergence as an arena of great power competition between the United States and China is mainly reflected in the technological innovation field. Much of the stress stems from Washington’s efforts to curb China’s growing global economic, technological innovation, and geopolitical influence, and there are many theaters where this tension is manifested. This rivalry involves full-scale, full-spectrum, great power strategic competition for wealth, power, and influence within East Asia and globally. It features competing ideals and models for political governance and economic development, along with competing views on the structure and rules of the world order, all rooted in competing interests. Each side is determined to maximize its global position and freedom of action relative to the other.

The past years have been marked by an erosion of U.S. credibility and a loss of confidence among the Middle East’s governments in the sustainability of Washington’s security commitments. They have watched Washington shift its focus to Asia, and their concerns grew following the chaotic withdrawal from Afghanistan. These anxiety-inducing circumstances have prompted the Middle East’s states to reassess their singular reliance on the United States, adopt more activist foreign policies, and explore diversifying their security relations with other great power to hedge against America’s perceived unreliability. Given this lingering uncertainty, they adopted several approaches in their foreign policies and practices and have resisted U.S. démarches regarding relations with China. From their point of view, there is no expectation that any one power or group of countries is capable of or willing to fill Washington’s role. China can potentially have the most significant impact on the regional order among these extra-regional powers. It is not a U.S. ally or partner but its main strategic competitor and adversary. However, fomenting instability does not benefit China, which has neither the will nor the capacity to fill the security role held by the United States in the region.

In a global great power confrontation, the Middle East is becoming increasingly of strategic importance. The speed with which this rivalry intensified created an incredibly precarious situation for the Middle East countries. They face a new geopolitical and commercial calculus, with new pressures on managing their national security and economic development. This can complicate their efforts to maintain ties with these powers by compelling them to choose between keeping the security partnership with the United States or strengthening economic and technological partnerships with China.

With China’s growing presence in the Middle East, Washington has not hesitated to exert pressure on the regional states since it perceives certain aspects of their cooperation with China (especially in the technological innovation field) as damaging national security. The Middle East states are aware of increasing American concerns about China and do not want to get caught in a conflict between the two great powers. Despite doubts about American commitment to their security, they recognize that there is no substitute for U.S. military presence in the region to block Iranian aggression. Thus, they wish to diversify their sources of support to avoid a situation of absolute dependence on Washington and supplement their strategic ties with the United States by developing relations with its biggest competitor and adversary, China. Nonetheless, the intensifying rivalry pressures the Middle East states to side with one of the two powers. As a result, they may lose either the security partnership with the United States or the economic and technological partnership with China.

In the era of global rivalry, Washington expects its allies worldwide to make stark and brutal choices. Hence, the Middle East states must manage their geo-economic ties with China while understanding America’s serious worries and the limitations these concerns place on their economic and technological partnership with China. The Middle East states cannot go any other way for a region that has always valued its security partnership with the United States over everything else. The U.S. military presence in the region suggests a degree of interdependence between the U.S.-Middle East states, making their partnerships indispensable and irreplaceable. Neither China nor Russia has the military capability to project power in any part of the world or the wherewithal to replace Washington as the security guarantor of the Middle East despite the United States proving to be an increasingly unreliable partner in recent years.

The impossible situation forces the Middle East states to struggle to balance their vital security partnership with the United States with their valuable and burgeoning economic ties with China. They also labor to maintain parallel partnerships and do everything they can to avoid choosing a side. Nevertheless, the extent of economic or technological collaboration with China is a function of Washington’s pressure. The more substantial such pressure, the harder it will be for Middle East states to develop technological innovation ties with China. At the same time, China may also use pressure to promote its position in the region at the expense of the United States, making it hard for the Middle East states to maintain parallel partnerships.

Israel has a flourishing sector in emerging innovative technologies. It is one of the world’s foremost innovation hubs with around 6,000 active start-ups, spending 5 percent of its annual GDP on research and development-the highest in the globe.  Hence, in the past two decades, 97 percent of Chinese investments in Israel were in the technology sector. The Chinese investments in Israel to develop technological innovation are part of a determined state effort to expand economic power and accelerate the development of military applications (e.g., a cyberweapon) that support the rising power’s geopolitical ambitions. As Chinese president Xi Jinping said to the nation’s elite scientists in a major speech in May 2021, “Technological innovation has become the main battlefield of the international strategic game.”

As mentioned above, the United States watches its key allies in the Middle East and expects them to make stark and brutal choices. Since Israel and Washington share deep defense and technology innovation ties, China’s focus on acquiring emerging digital technologies raises concerns about backdoors into American technology and unwanted tech outflow from Israel. The U.S. nightmare is that by partnering with or buying an Israeli company, China could obtain a critical technology that gives it an advantage in the military or other sensitive fields.

For Israel, this needs a tricky balancing act. On the one hand, China’s attraction lies in its vast, rapidly expanding economy that presents countless opportunities for the Israeli economy. Israel seeks to expand its economic and diplomatic ties with the People’s Republic of China, the world’s fastest-growing major economy, and diversify its export markets and investments from the United States and Europe. On the other hand, Israel’s close friendship with Washington—its security guarantor—is non-negotiable.

China-Israel ties deepened during the corruption-dogged tenure of Prime Minister Benjamin Netanyahu, who declared the two countries were “a marriage made in heaven.” In 2017, they signed a tellingly titled “Comprehensive Innovation Partnership.” Israel deepened its economic and tech ties with China when Washington moved in the opposite direction. Overall, Sino-Israeli ties have developed smoothly, without bilateral historical baggage or direct conflicts of interest (in the past, relations were damaged due to restrictions on the Phalcon and Harpy UAV defense exports).  Indeed, the ties are always influenced by a third party, namely, the United States, which is watching, not necessarily with jealousy but with grave concern, mixed at times with anger. This is due to Jerusalem’s frequent disregard for Washington’s discomfort as Beijing makes inroads, figuratively and deep, into areas of America’s vital interests in the Middle East.

Nevertheless, more than infrastructure, technology is the key to great power rivalry. China’s access to emerging innovative technologies could shift the global power balance via economy and tech. 492 out of 507 Chinese deals with Israel between 2002 and 2022 were in technology, including IT, communications, clean and agricultural tech, and robotics. While overall sales have dropped in recent years as Israelis have become more sensitive to U.S. concerns, the proportion of tech remains exceptionally high: forty-three of forty-four investments from 2021 through to May 2022.

However, the growing U.S.-China technological competition is challenging this blossoming relationship, with Washington putting its closest ally under increasing pressure. As a result, U.S. president Joe Biden and Prime Minister Yair Lapid announced a high-level technology dialogue in July 2022 that will focus on safeguarding shared national interests in critical and emerging technologies. Therefore, the U.S. technological partnership with Israel aims not merely to encourage the flow of technology between the two states but also to limit China’s access to Israel’s technology and innovation, emphasizing cutting-edge technologies. Israel and the United States agreed to elevate their partnership, adapting it to the challenges of the twenty-first century and the era of great power competition, with technology at its core.