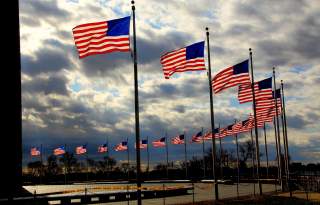 On the topic of immigration, Washington has split into two tribes. One wants open borders; the other doesn’t. The odds of the disagreement ending in a bipartisan solution are about the same as Connor McGregor asking Khabib Nurmagomedov to be his best man.

Immigration will get sorted out not in congressional debate but at the ballot box. The 2020 national elections may well deliver a mandate to one side or the other. Conservatives could win that mandate if they rally round a consensus reform agenda.

To forge an appealing common path, conservatives will have to rethink how they handle the border issue. President Donald Trump has roused his base with a call to “build the wall.” Some think that’s all that’s needed and are willing to trade away almost anything to fund the wall. That would be a huge mistake.

Trump got an object lesson in tradeoffs when he offered to support continuing the Deferred Action for Childhood Arrivals (DACA) program—the Obama-era initiative that offered temporary lawful status with work authorization to young people brought here illegally as children. Though some GOP politicians would have gone along with it, Trump’s base was having none of it.

Clearly, on the amnesty issue, Trump cannot afford to compromise. Yes, security demands that there be more wall on the border. But a solid plan immigration reform agenda wouldn’t sell the farm to buy more seed corn.

Trump has drawn so much attention to this one requirement that the cacophony around his demands has drowned out discussion of all the other stuff that’s needed. An effective reform plan needs to make the case for more than additional “wall”; it should address all the elements that make for a more secure southern border.

A reasonable plan would pair cost-effective border security measures and regional cooperation with robust enforcement that ends the practice of “catch and release.” These are the needed pieces:

Regain operational control of border. That requires all the people and parts needed for border security—a system that welds all of the nation’s border assets into a single coherent security enterprise including key investments in border infrastructure (read wall), staffing, technology, and support resources.

Safeguard the sea. If those bent on entering our country illegally can’t get across by land, then they’ll come by sea. We need a robust Coast Guard that’s up to the task. The service needs more money to get the right mix of vessels, including Fast Response Cutters, Offshore Patrol Cutters and unmanned aerial systems.

End catch and release. Homeland Security needs more detention capacity, and Congress needs to pass laws that end the requirement to release people caught crossing the border illegally. Many legal loopholes should be closed to stop illegal immigration and help those with legitimate asylum claims. For example, Congress should reject the judicially mandated Flores settlement so that children are allowed to remain with their parents while awaiting asylum adjudication or prosecution for violating immigration law. Moreover, about 90 percent of asylum claims are rejected, yet virtually no one denied asylum reports for deportation. This, too, must stop.

Partner with the region. The United States needs to work the other side of the border, as well. International cooperation is needed to combat transnational criminal networks and gangs, discourage illegal migration, improve border security and public safety, and strengthen Latin American economies and civil societies. The Trump administration and Mexico are already working on “creative solutions to deal with Central American migrants while their asylum claims are processed.” There is no reason why the United States can’t build on this cooperation to develop the right package for partnering with Mexico and Central America in dealing with security and humanitarian crises that affects us all.

Conservatives can win the day if they add all these planks to their plan—and don’t trade any of them away.

A Heritage Foundation vice president, James Jay Carafano directs the think tank’s research into matters of national security and foreign relations. This is the last in a three-part series laying out a step-by-step approach to immigration reform.