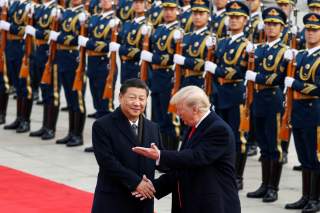 In recent years, sentiment has been growing in Washington that China increasingly challenges U.S. interests, to a degree that is rendering several decades of efforts to influence Beijing positively through deep engagement unsuccessful. Now a bipartisan Congressional-Executive Branch consensus is emerging that the United States must pursue a markedly different approach to China. Indeed, the latest National Defense Authorization Act mandates that President Donald Trump submit to Congress a whole-of-government strategy for dealing with China by March 1, 2019. A new report on China’s military explains that the Department of Defense is working to support just such an across-the-board interagency effort.

Now well into their third century, relations between America and the Middle Kingdom are both arguably of unprecedented importance and in the greatest disarray since their normalization in 1979. Four decades of expanding cooperation, however fitful, have come to a close. While there is widespread agreement that fresh ideas are needed for managing U.S.-China relations, however, there has been little coalescence around an actionable way forward—let alone promulgation and implementation of a comprehensive, coherent China strategy. Meanwhile, Beijing relentlessly pursues its own strategy, and attempts to permeate bilateral interactions with supporting rubrics and wording to seize the initiative of ideas.

To rectify that disparity, I propose a new American vision for U.S.-China relations: the pursuit of “Competitive Coexistence.” Based on the advice I have provided to key U.S. government principals over the past several years, this paradigm contains four pillars:

– Reduce tensions and pursue shared interests as much as Beijing is willing to do so.

Under Xi Jinping’s ambitious authoritarian leadership, China shows unprecedented willingness and ability to undermine American interests even at the expense of harming its own public image and bearing other significant costs. Bilateral frictions are increasing apace. To help meet China’s challenge, U.S. officials should publicly promote a paradigm for bilateral relations that is distinct from the problematic ones that Beijing hopes Washington uses: “competitive coexistence.” While they contend continuously and interact in contested spaces, the United States and China may nevertheless avoid kinetic conflict, and may pursue shared interests where mutually motivated.

Proactively articulating this American vision is far safer than ceding the initiative to China with its manipulative rhetoric and unrivaled propaganda infrastructure and messaging discipline. Being clear, firm, and consistent from the start is far more stabilizing than raising false hopes in Beijing only to have them dashed, or risking dangerous misperceptions. And it is critical to sustaining public support and reassuring U.S. allies.

The following offers nine principles of competitive coexistence and explains how to implement them.

Ongoing contestation is normal between great powers. This reflects a reversion to historical norms of ongoing competition after the brief and unsustainable unipolar moment has ended; even as the United States remains strong as the world’s leading power, China’s power remains subject to significant limitations, and the world remains far from being a true “multipolar” system. Because of conflicting political systems, values, and interests, U.S.-China distrust and competition is unavoidable. Such competition will persist for the foreseeable future. Both nations must learn to live with it for the long term.

The United States will neither shrink from competition nor pretend that it does not exist. U.S.-China relations has competitive aspects that American officials should not exacerbate gratuitously, yet must grapple with and not shy away from. They must be clear and candid in voicing concerns to their Chinese counterparts in both public and private; the United States and its allies no longer tolerate inconsistent “happy talk” or unfair arrangements. In one of the best examples to date, National Security Council Senior Director for Asian Affairs Matthew Pottinger recently told Chinese officials: “In the United States, competition is not a four-letter word.”

The United States will proactively pursue its interests. It will continue to uphold its vital interests and those of its allies and partners. These include maintaining the rules-based international order, in which disputes must be resolved peacefully under international law.

The United States will stand its ground in contested areas and thwart Chinese dominance. The two great powers have often-conflicting vital interests and overlapping presence in many domains and contested spaces. Neither can dominate, displace, or expel the other. The United States will uphold its interests even when China’s efforts impinge upon them and generate friction.

Interests and presence overlap most visibly in what China terms the Near Seas (Yellow, East, and South China Seas). Home to all of Beijing’s disputed island and maritime claims, these are the focus of its greatest military preparations and potential for conflict with the United States and its allies and partners. Much of these seas, together with their associated international waters and airspace, is a vital part of the global commons, on which the international system depends to operate effectively and fairly.

The United States, its allies, and the international community cannot allow Beijing to use force, or the threat of force, to carve out a zone of exclusion in which its neighbors are subject to bullying without recourse and vital global rules and norms are subordinated to its parochial priorities and domestic laws. This would set back severely what Beijing itself terms “democracy” or “democratization in international relations.” China’s paramount leader himself has declared that “We should work together to promote the democratization of international relations.” (“我们应该共同推动国际关系民主化.”)

Instead, the way forward for the United States is clear: even as China advances, America cannot retreat. The United States must continue to operate in, under, and over the Near Seas; and preserve them as part of a Free and Open Indo-Pacific for all to use without fear or favor. This robust but realistic approach includes accepting the fundamental reality that the United States will not roll back China’s existing occupation of South China Sea features, just as the United States will not accept China’s rolling back its neighbors’ occupation of other features. At a minimum, the United States must preserve peace and the status quo in a vital yet vulnerable region that remains haunted by history. Better yet, it should pursue a competitive strategy of proactively helping allies and partners pursue their legitimate rights and interests. That would help put Beijing on the defensive, thereby helping to check its expansionism.

The United States will hold its ground and uphold its interests even when doing so entails some risk. China seeks advantage by opportunistically embracing risk and the friction and tension it generates. Examples include its decision to build “islands” in the South China Sea, escalate the use of economic statecraft against American allies and partners, and directly interfere in the politics of countries across the world—activity that China was more reluctant to overtly engage in when it was weaker. Beijing’s current leadership is clearly comfortable with a certain level of friction and tension.

To pursue an effective competitive strategy of its own, the United States must accept more risk. It should make clear that it, too, is comfortable with a degree of friction and tension. Indeed, China is testing the United States continuously to determine its tolerance for risk, friction, and tension.

The resulting friction can recalibrate Chinese actions threatening American interests. In Leninist fashion, Beijing pushes forward when its relentless probing fails to meet resistance. But when the United States does resist, China often chooses not to escalate: this demonstrates the limits of Beijing’s appetite for risk. Successes to date include:

– the previous administration’s threat of sanctions against Chinese companies for cyber theft, which resulted in significantly reduced People’s Liberation Army (PLA) involvement in such activities for two years;

– this and the previous administration’s deterring Beijing from dredging and fortifying Scarborough Reef;

– this and the previous administration’s increasing China’s risk perception and limiting its activities by explicitly linking the Senkaku Islands to Article 5 of the U.S.-Japan Security Treaty;

– and India’s temporary halting of Chinese road construction in Doklam near the long-disputed Sino-Indian-Bhutanese border.

These examples of Beijing’s recalibration following pushback indicate opportunities for American “counter-pressure” to deter negative Chinese actions. The United States should also prepare cost imposition options to punish bad behavior. When Beijing does respond, it does not automatically do so aggressively or escalate. Despite complaining, it continues to tolerate U.S. Freedom of Navigation Operations (FONOPs), military surveys in its claimed Exclusive Economic Zone (EEZ), and Taiwan Strait transits.