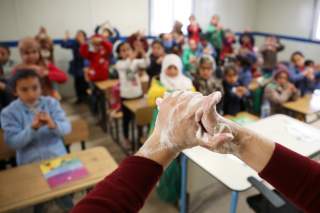 As coronavirus spreads across the world, some countries can be trusted to be transparent and do the right thing and others cannot. It was China’s initial denial, for example, which allowed coronavirus to spread out of control in the country. Iran, too, became an epicenter as Iranian officials defaulted to secrecy and conspiracy rather than public health best practices. Italy showed the danger of political correctness, as politicians’ statements a month ago that quarantine or controls on visitors from China were equivalent to racism. In the United States, too, Americans may pay the price for President Donald Trump’s botched early reaction and lack of testing. In Turkey, President Recep Tayyip Erdoğan lied about coronavirus incidents in order to keep Turkey’s tourist industry alive.

Yes, There Is a UN Image Problem in Washington

It is at times like this that conservatives in Washington should reconsider what the United Nations has to offer. At the same time, progressives and UN supporters should recognize that the UN has an image problem in Washington because of real and legitimate problems. The late Secretary-General Kofi Annan presided over an unprecedented corruption scandal and, as head of peacekeeping, refused to head-off the Rwandan genocide. Progressives may decry the Trump administration’s decision to defund the United Nations Relief and Works Administration (UNRWA) but ignore that the UN envisioned decommissioning the agency in 1954 rather than make it a permanent feature of the UN bureaucracy. And there is no excuse for how the employees of UNRWA embraced terror groups and the transformation of UNRWA property into weapons depots.

UN human-rights advocacy is also a lodestone weighing down the reputation of the broader United Nations. The UN Commission on Human Rights became a forum for dictatorships to use the mantle of membership to whitewash their own abuse and attack democracies. Its commissioner, Mary Robinson, did the reputation of the UN Human Rights Commission and the broader UN no favors when she oversaw the Orwellian “World Conference Against Racism, Racial Discrimination, Xenophobia and Related Intolerance” and allowed it to descend into an anti-Semitic hate fest. The UN Human Rights Council, founded in 2006 in an effort to right the wrongs of its predecessor and have a fresh start, has been little better. Consider its members: Mauritania, the last country in which racial slavery is widely practiced, and Afghanistan, Pakistan, Somalia, Sudan, Qatar, and Nigeria—all of which make homosexuality a capital crime. Other members include the Congo, the Philippines, Eritrea, Libya, and Venezuela, countries which have some of the world’s worst human rights records. That these states have become arbiters of international human rights show how the council has become a cheap satire of its mission set.

There was UN complicity in Haiti’s cholera outbreak and peacekeeper sexual abuse elsewhere. Then, there is the outright stupidity of poking the UN’s largest donor in the eye. On Feb. 26, 2020, for example, the special advisor to the director of the World Health Organization appeared on “Hardball,” an MSNBC show, to bash Trump. Trump may be deserving of criticism, but crude partisan politics should not be the role of any UN agency or official.

Recent secretaries-general have treated their positions more as a means to take lavish trips worldwide than to actually manage the organization over which they preside. With so much waste, abuse, and poor judgment, it is easy for the Congress—the gatekeepers who maintain the United States as the UN’s largest donor—simply to throw in the towel.

Support Cheap and Efficient UN Activities like Peacekeeping and UNHCR

Conservatives in Congress should not, however, abandon the UN. They need not excuse the bad nor sacrifice American sovereignty to recognize and fund the success of those UN agencies which operate efficiently and conduct missions more cheaply and efficiently than the United States, or even tackle problem sets the United States cannot.

Consider peacekeeping: The UN has cracked down on the abuses of peacekeepers, and their abuse of power no longer occurs with the same frequency, if at all. And while some peacekeeping missions have continued for decades, for example, UNFICYP in Cyprus, UNIFIL in Lebanon, and MINURSO in Morocco and Algeria, without bringing peace, their host countries do not necessarily want them to leave. While these might seem an example of waste and inefficiency, Moroccan and Israeli security officials say they do not want the missions to go away as they provide a vital communication role and can be useful in separating otherwise bellicose sides.

More importantly, the UN can point to a number of successful missions which have not only returned countries to peace, but have also ended rather than continue into perpetuity. The conflicts in Liberia and Sierra Leone once seemed intractable, but are now over. And UN peacekeeping intervention in Cote D’Ivoire likely saved that country. The continuing UN mission to the Central African Republic has likewise helped that country turn the corner, even though the situation there remains precarious.

In December 2019, I had the opportunity to observe the work of the United Nations High Commissioner for Refugees (UNHCR) in Iraq up-close as their guest, albeit as a cynical one. I realized I was wrong in some of my earlier assessments. While U.S. forces stayed out-of-sight as they helped train their Iraqi counterparts and as U.S. diplomats remained stuck behind the blast walls of their compounds, UNHCR workers speaking Arabic fluently moved among communities most U.S. personnel could never access. And while the Iraqi government delayed rebuilding parts of Mosul, UNHCR assisted with renovating structures that were less than 60 percent destroyed and helped residents of battle-scarred Mosul return to their homes. Along the Syrian border, they spoke to Arab farmers about the problems they faced with resettlement, and they worked with Iraqi lawyers to help traumatized Yezidis and other returning refugees and displaced persons to acquire the papers and permits they needed to resume their lives. They partnered with local groups to organize and operate refugee and displaced person camps, ensuring that they augmented local capacity rather than supplant it. They did what the Pentagon, State Department, and U.S. Agency for International Development never could in Iraq, and they did it cheaper and more efficiently. Additionally, UNHCR is undertaking similar missions with Syrian refugees in Lebanon and Turkey, and in the Congo. The reports they produce from their various missions are exponentially more nuanced and detailed than those that U.S. diplomats write with their limited exposure to the countries which they theoretically monitor.

Then there is the coronavirus. As some countries act irresponsibly because of their leader’s vanity, ego, or incompetence, a neutral arbiter like the UN can provide a check on overreliance on state propaganda. At the same time, the coronavirus pandemic highlights how important UNHCR work can be as the health of refugees would otherwise fall through the cracks of being no one’s responsibility, but the potential that refugees could spread disease is everyone’s problem. UN activists and internationalists are wrong to suggest that countries must open their borders to migrants. Sovereign countries have the right to defend their borders. Sovereignty matters. But at the same time, whether migrants cross borders or remain in camps, their health impacts everyone.

Conservatives—myself included—may bash the United Nations for all manner of faults, but honesty also dictates that the United States recognizes the various successes of the UN agencies when they do occur. Perhaps it is wise to stop funding what does not work, but the same logic suggests increasing investment in what has been working, peacekeeping and UNHCR first-and-foremost.