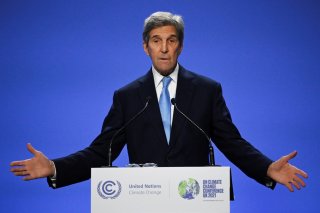 That the United Nations Climate Change Conference of the Parties 26 (COP26) went into overtime after two weeks of negotiations revealed once again that the issue of “climate change” is primarily a cover for the conduct of traditional world politics and not an issue realistic statesmen take very seriously on its own merits. The battle over language in the final Glasgow Climate Pact allows every country to follow its own course, which means a continued priority on economic development to improve living standards and national capabilities. The globalist notion favored by UN officials and liberal intellectuals looking for an issue “above” national interests that can unify the world “community’ under their guidance has been in play for better than a quarter-century. The United Nations Framework Convention on Climate Change (UNFCCC) was created in 1992. Yet, it is not attractive to leaders who recognize their legitimate responsibility is to the betterment of their own people.

Ahead of the Glasgow talks, the UN had set several criteria for success, none of which were achieved. The goals set in the 2015 Paris Agreement will remain unfulfilled. The UN’s aim is to have countries cut their carbon dioxide emissions in half by 2030, and the UNFCCC would like 80 percent of coal-fired power plants (which provide one-third of the world’s electricity) closed by that same date. Yet, everyone knows this is impractical. The required disruptive reductions in economic activity would impose unacceptable hardships on society, especially on its most vulnerable citizens. After the enormous costs of the “lockdowns” during the Covid-19 panic, there is no tolerance for any new government mandates that would slow, let alone reverse, a return to a normality which includes prosperity and security.

The strong push to end the use of fossil fuels, particularly coal, was rejected. India took credit for changing the wording in the pact to “phase down” rather than “phase out” the use of coal but was acting on behalf of most of the world community. In another statement, of the 197 countries at Glasgow, only forty pledged to end the use of coal (and the United States was not among them). China was very active in supporting India. In North America and Western Europe, coal use has been on the decline but only because alternatives have become available, most importantly natural gas. But natural gas capacity has not kept up with world demand and is considered a targeted fossil fuel. Meanwhile, “renewable” sources such as solar and wind are still on the horizon. There is no reason to be partisan about energy supplies as long as they are reliable, affordable, and secure. Coal fits that profile and will continue in use until abundant replacements come along that also fit that profile. Thus, India’s language only reflects reality.

On the sidelines of COP26, over 100 national governments, cities, and major businesses signed the Glasgow Declaration on Zero-Emission Cars and Vans to end the sale of internal combustion engines by 2035 in leading markets and worldwide by 2040. The goals are set far enough into the future that it is hoped that alternative vehicle fuels will be available. The United States and China were not among the signers, even though both governments are supporting the development of electric vehicles. Technology and consumer demand will determine the future of private transportation, not airy proclamations.

International competition will be part of that process as well. As President Joe Biden noted at a General Motors plant in Detroit that manufactures electric vehicles on November 17, America’s “competitive edge around the world depends on the strength of our industrial base here at home.” Denouncing past policies, he stated “We risked losing our edge as a nation, and China and the rest of the world are catching up. Well, we’re about to turn that around in a big, big way. We’re going to be building again. We’re going to be moving again.” And his subsidies will only go to electric vehicles produced in American factories with unionized workers.

With fossil fuels generating some two-thirds of world energy production (59 percent of U.S. energy, with nuclear providing another 20 percent), all the talk about transitioning away to other sources must be flexible. Hence the term at COP26 was expanded to “unabated” fossil fuels, which means projects that do not deploy technology to absorb the carbon they produce. This allows new projects that do include ways to offset emissions, a path that may be more cost effective than shifting to alternative systems whose capabilities are unproven. Even the ambitious Statement on International Public Support for the Clean Energy Transition which the United States signed with thirty-three other nations and five international financial institutions used the term.

China did not sign that statement ending government financing of unabated fossil fuel projects. Foreign ministry spokesman Zhao Lijian said on November 15 that transforming energy production was “an incremental process” that should take account of “different national conditions, different development stages and resources” Coal accounts for 57 percent of the country’s energy consumption and generates over 70 percent of its electricity. China plans to increase its coal use until at least 2026 to help meet ever increasing demand for electricity.

The issue is not just domestic. Beijing’s international Belt and Road ambitions center on energy, infrastructure, and transportation projects, all of which, directly or indirectly, include elements that would be affected by the statements and agreements issued during COP26. Beijing envisions initiating programs in some sixty countries and investing up to $4 trillion. There are reportedly forty-seven coal-fired power plants in foreign countries China is financing. The developing countries need these funds and Beijing will undoubtedly place geopolitical advantages at the top of its priority list. As a result, the United States and its allies are offering alternatives. Biden plans to invest in five to ten large infrastructure projects around the world in January as part of his “Build Back Better World” proposal that he made at the G7 meeting in June. The question is, if U.S. projects have climate policy strings attached will they be able to compete with Chinese projects that are free of such constraints?

In its interpretation of both the Glasgow Climate Pact and the Joint Glasgow Declaration on Enhancing Climate Action in the 2020s, issued by Presidents Xi Jinping and Biden, the Chinese foreign ministry emphasized “With China’s wisdom and proposals, the Chinese delegation effectively safeguarded the principle of common but differentiated responsibilities and the common rights and interests of developing countries, played a constructive role in the successful adoption of the outcome at the conference and demonstrated China’s image as a responsible major country.”

The “differentiated responsibilities” phrase means in UN lingo that developed countries (like the United States) have to do everything, whereas the developing countries (like China) do not have to do anything. This principle was established at the UN in 1992 and the 1997 Kyoto Protocol was based on it. That agreement required thirty-seven “developed” nations to cut back their emissions while placing no requirements on the rest of the “developing” world. The United States did not become a party to Kyoto because it was unequal in its mandate. It was at the 2009 COP15 in Copenhagen that President Barack Obama put an end to this division, requiring that all nations be treated the same in terms of responsibility. The practical result is that no sovereign nation is subject to mandates, all follow what Xi repeated in his statement issued at COP26 as “national conditions” when delivering their “climate action measures.”

Xi also used terms associated with conflict more than cooperation. He said, “multilateralism is the right prescription,” a thinly disguised slam at alleged American unilateralism, and again stressed placing most of the burden called for by the UN on the “developed countries” who “should not only do more themselves, but should also provide support to help developing countries do better.” The latter point being one of the hottest issues at COP26; how much money would the developed nations give to the developing nations to adapt to climate change. The $100 billion a year promised in 2015 has not been provided, but the developing countries want even more to cover “damages.”

In the much-heralded joint U.S.- China declaration, the operative word was “cooperation” not “commitment.” While the United States listed actual objectives, China only listed aspirations. For example, the United States set a goal to reach 100 percent carbon pollution-free electricity by 2035 whereas China only said it would “phase down coal consumption during the 15th Five Year Plan and make best efforts to accelerate this work.” This is exactly the patten of the U.S.-China Joint Announcement on Climate Change made by Presidents Obama and Xi in 2014 and will be about as meaningful. It should be remembered that then-Secretary of State John Kerry championed the 2014 statement just as he did the new one as Biden’s Special Presidential Envoy for Climate.

Hopes that climate issues will transcend strategic issues, rather than be shaped by them, seems a nonstarter. Whatever the topic, the touchstone for responsible and realistic policy across the globe remains the national interest.