The Coronavirus and Pakistan: Why People Must Immediately Begin Social Distancing 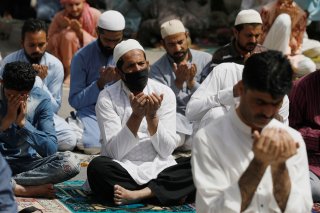 The World Health Organization (WHO) declared the coronavirus disease, also known as COVID-19, a pandemic as it has spread from Wuhan China to 185 countries of the world. This shows how insignificant geographical boundaries have become and how the consequences of human actions are not limited to national borders. Any country that does not take the necessary precautions advised by health experts will soon be walloped by the disease. As Ph.D. students at George Mason University in the United States who are witnessing the flippant manner in which Pakistanis are reacting to the pandemic, the observation raises red flags and serious concerns for Pakistanis.

Leading global experts agree on the necessity of good hygiene and social distancing to contain the spread of the coronavirus pandemic.

Social distancing, which is basically physical distancing, is the practice of reducing physical contact with anyone outside of close family and avoiding large social gatherings. In Pakistan, social distancing has been a significant challenge. Pakistan recently recorded 1,022 confirmed coronavirus cases and eight deaths and that number is increasing.

Pakistan has all of the conditions that would allow the coronavirus pandemic to run rampant.

First, the geostrategic location of Pakistan as a gateway to Central Asia and the Middle East makes it vulnerable to transmission of the disease.

Second, Pakistan borders the two most affected countries—China and Iran, both with frequent social, religious, and economic tourism with Pakistan. Moreover, there is a strong Chinese presence in Pakistan due to China’s Built Road Investment (BRI) in the country.

Third, the official response toward the pandemic has been insufficient at best. The prime minister of Pakistan, who has responded to the pandemic poorly, stated in a televised address to the nation that the country could not afford to take an economic break by enforcing social distancing. Furthermore, officials mishandled the infected pilgrims returning from Iran. Consequently, in the absence of a bona fide crisis response, the public is churning out myths and conspiracy theories and turning to totkay (sorcery and unscientific treatments) for coronavirus.

Fourth, communal gatherings and social settings are a lifeline for Pakistanis, thus offering the pandemic more infesting grounds if these are not restricted.

Analyses predict that physical distancing would flatten the curve, which projects its future transmission, thus reducing the health-care burden. What this means in practice is that health providers will not become overwhelmed. Comparing numbers from cities enforcing distancing with those from cities not applying or delaying distancing substantiate the recommendations. For instance, research on the Italy outbreak shows the effectiveness of early action. The coronavirus disease was first detected in Italy, in the Lodi province, which imposed restrictions starting February 22. Whereas, Bergamo province, which started with fewer cases but did not enact restrictions until March 7, far surpassed the number of cases in Lodi.

Beyond the confirmed 1,022 cases, the number of undiagnosed cases is likely to be much higher because of people’s reluctance to get diagnosed, stigmatization, and the scarcity of resources. With a high transmission factor, researchers predict that the actual number of infected people in the United States would be ten times to hundred times the confirmed number. Considering undiagnosed cases existing in Pakistan to be ten times the official number, there may be as many as forty-five hundred active cases today. A compelling prediction suggests that community spread could increase the active cases to eighty thousand in a month.

Is the health-care system in Pakistan equipped to deal with the coronavirus outbreak? The numbers suggest that it is not.

According to the Pakistan Bureau of Statistics, the country has close to 1.5 million beds available. Not only is this number inadequate, but the ratio of general to intensive care unit (ICU) beds is also concerning. The WHO recommends a 50:1 ratio of general wards to ICU beds, and there must be a trained nurse for each bed in the ICU. A leading news agency of Pakistan reports that the number of ICU beds in twelve major tertiary care hospitals in the largest province Punjab adds up to only 250. One of the largest hospitals of Punjab, Jinnah Hospital, has thirty-four ICU beds out of a capacity of 1250 beds. In addition, there is only one nurse available to serve two thousand people in Pakistan. According to the chairman of the National Disaster Management Authority Pakistan (NDMA), the country has a total of 1,700 ventilators available to fight the coronavirus. Several reports highlight the current poor state of medical equipment in the country, which is more dire in rural areas.

In the face of an exponential rise in the number of coronavirus cases, the country will witness an acute shortage of beds, health personnel, and medical equipment.

Given the premise, Pakistan still does not realize the severity of the situation. Markets are bustling. People are partying. Greetings rituals do not suffice with a handshake, people also hug at every encounter.

Even though Muslim countries across the world and the Middle East have closed mosques for daily and Friday prayers, many of Pakistan’s hardliners are still debating whether or not shutting down congregational activities in the mosques is illicit.

The fact is that the pandemic will not disappear any time soon. We are all likely to be targets or carriers of the disease at some point. Thus, we must reorient our behavior in favor of collective interest. While researchers try to investigate this virus, one effective strategy, as learned from Italy and other countries, is to observe a lockdown and to quarantine (or practice distancing from others).

A lockdown can only be fruitful if people are willing to accept it. The sooner Pakistan implements a lockdown and enforces quarantine, the sooner it can contain a community spread. In this regard, public gatherings of all sorts should be banned. Offices should give employees the facility to work from home. Ensuring social safeguards such as the provision of food to daily wage earners should be a central part of the lockdown strategy. In addition to observing quarantine and lockdown procedures, proper hygiene must be practiced to prevent the spread of the pandemic.

Importantly, in a country where ulemas (religious scholars) are revered and looked up to for guidance, they should play a decisive role in educating the public while drawing from authenticated guidance. In particular, they should remind the people that Prophet Muhammad advised that people from communities with an epidemic disease may not leave and those from healthy communities should not enter the inflicted communities. Similarly, they should remind people of the Hadith (the Holy Prophet’s saying) about proper hygiene practices, for example, the Holy Prophet said that the blessings of food lie in washing hands before and after eating. For those who overemphasize the congregational prayers while undermining the necessary precautions (social distancing for instance) either by mocking or stigmatizing others, ulema should narrate the following story, conveyed by ninth-century scholar Imām Al-Tirmidhi:

One day, Prophet Muhammad saw a Bedouin man leaving his camel without tying it. He asked the Bedouin, “Why don’t you tie down your camel?” The Bedouin responded, “I put my trust in God.” The Prophet then said, “Tie your camel first, then put your trust in God.” This story indicates the significance religion attaches to the adoption of precautionary measures.

The precautionary measures are for the safety and well-being of not only our families and communities but are also consequential to those separated by human-made borders. While the researchers are working hard to come up with a cure to combat the pandemic, a piece of simple yet potent and universal age-old advice is to focus on prevention.

Since anyone exposed to the coronavirus can be a silent carrier, physical or social distancing seems a reasonable strategy for the greater good. Research suggests that young and healthy individuals can develop immunity to the disease yet they can unknowingly transmit it to others, including the elderly and those with a vulnerable immune system. Therefore, the higher and longer prevalence of the virus could strain the already burdened healthcare system in the United States and Pakistan as it has already significantly harmed many social capacities. We all must act quickly to combat the coronavirus pandemic effectively.

To avoid transmitting the disease, people in Pakistan, the United States, and other countries must assume that they are carriers of the disease and change their behavior as such—at least until the global community can figure out other ways to cope with the virus. This attitude should shape our narratives and collective action. It should lead to limiting physical meetups and interactions, among other things.