The Coronavirus Has Become Terrorists’ Combat Weapon of Choice 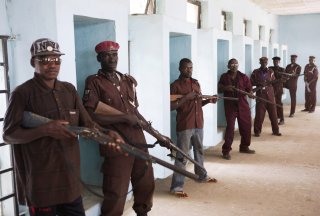 Countries around the world continue to grapple with the coronavirus as the pandemic spreads across borders.  Despite efforts by governments, healthcare providers, and humanitarian workers, communities are reeling from the impact of the virus. This is particularly true of traditional vulnerable populations, including more than seventy million forcibly displaced people and millions more living in areas with little to no public health infrastructure. But what about those communities under the sway of armed groups and non-state actors?

The United Nations’ Secretary-General has called for a global ceasefire to mobilize efforts to defeat the coronavirus and stop attacks on health, water, and sanitation facilities. However, few have heeded his call. Indeed, armed groups from Boko Haram and al-Shabaab in Africa to Hayat Tahrir as-Sham in Syria to MS13 and Barrio 18 gangs in El Salvador continue to engage in violence. These groups often lack the capacity, legitimacy or motivation to care for people under their control. Few are implementing baseline preventative public health measures. Some are communicating ideologically inspired misinformation about the virus. The result is leaving civilian populations largely defenseless in the face of the pandemic.

Over the past decade, millions of Africans have been impacted by the presence of Boko Haram—one of Africa’s deadliest militant groups. Across Nigeria, Niger, Chad, and Cameroon more than 2.5 million people are currently displaced by their insurrection. The group is now denying the threat the coronavirus poses, sowing disinformation, and continuing to wage a violent insurgency throughout the region.

Security considerations make Boko Haram’s stronghold in Nigeria’s Borno State almost inaccessible to the outside world. Despite being cut off from the rest of the country, there is mounting concern about the disease spreading quickly through the civilian population trapped under the rule of Boko Haram. Nigeria currently has more than 12,480 cases of the coronavirus, including 356 confirmed cases in Borno State. Restrictions on freedom of movement for those living in Boko Haram-controlled territory may delay the virus from reaching them. As the virus reaches these communities, few will have the expertise and infrastructure needed to contain the spread or treat those suffering from the virus.

Meanwhile, in Chad, Boko Haram has ramped up its campaign of violence. In late March, the group carried out its deadliest attack on the Chadian military, killing ninety-two soldiers. The attack and retaliatory military operations have forced over twenty thousand people to flee their homes. Thousands of Chadians find themselves vulnerable to violence and the threat posed by the coronavirus.

The security situation in Boko Haram’s territory makes it extremely challenging to assess the spread of the virus. In addition, the group’s coronavirus disinformation campaign will make those living under its control more vulnerable. One of Boko Haram’s infamous leaders, Abubakar Shekau, recently released an audio recording claiming that only people who commit evil deeds could be infected. Shekau dismisses calls for social distancing as anti-Muslim and insists that the coronavirus preventative measures are designed to prevent the faithful from observing Islam’s holy month of Ramadan. The complete lack of testing in areas under their control will support their leaders’ claims that the disease affects only those who do not adhere to their beliefs.

Somalia is struggling to combat the coronavirus while simultaneously battling extreme flooding in the wake of drought, along with a locust crisis that has left 5.2 million people in need of humanitarian assistance. Decades of conflict and an extremely health system has left the country poorly positioned to confront the pandemic. Indeed, more than 2,360 confirmed cases have been reported as Somali authorities scramble to respond to the outbreak in the areas it governs. For its part, the Al Qaeda-affiliated al-Shabaab has done little to prepare the population in the areas of the country that it controls.

Al-Shabaab controls large swaths of land in southern and central Somalia, where more than eight hundred thousand internally displaced people reside. Preventative public health measures such as a curfew in Mogadishu remain difficult to enforce beyond the administrative capital because of a lack of government control and infrastructure. Given the volatile security context, many humanitarian agencies are unable to reach these areas, preventing vulnerable populations from accessing health services and benefitting from public health awareness campaigns.

Making matters worse, al-Shabaab is disseminating false information. The group is claiming that the virus is spread by the “crusader forces who have invaded the country and the disbelieving countries that support them.” Some analysts warn that Somalia could experience the most deadly outbreak in the world.  Al-Shabaab’s disinformation and failure to embrace any preventative measures could go a long way to turning this prediction into a reality.

In El Salvador, gangs and government officials alike are enforcing recommended public health measures to prevent the transmission of the coronavirus—but are doing so using extreme force, and thousands are being cut off from food and basic services. The nationwide lockdown to curb the coronavirus is a government measure, but gangs are enforcing it in areas like Soyopongo, La Libertad, and in the country’s capital San Salvador. Audio recordings emerged in which alleged gang members establish preventative health measures within their territories and ensure compliance under threat. An MS13 leader declared that they would “impose the prohibition on remaining in public spaces, under the threat of being beaten or being killed by gang members.”

The lockdown initially brought the homicide rate to an all-time low in March, but murders increased in April, prompting a government crackdown and granting police the ability to use “lethal force” against gangs. These types of hardline policies historically backlash; the more force used against gang members, the harder and more violently they push back.

Unlike ideological groups in Africa and the Middle East, in El Salvador, criminally motivated gangs like MS13 and Barrio18 dominate pockets of land, where government authority is virtually nonexistent. Gang violence has affected the lives of the five hundred thousand people trapped under their control. It has contributed to some of the highest homicide and femicide rates in the world, internally displaced 454,000 people, and forced hundreds of thousands to migrate to escape terror and violence.

While the public health advice of gangs and the government align during this pandemic, the gangs are criminal organizations that lack the legitimacy or will to provide healthcare or financial support that the government could provide during a lockdown. The threats of violence and control especially highlight the risks to poor and vulnerable Salvadorans living under this government-mandated, gang-enforced lockdown. Salvadorans cannot work, which pushes them deeper into poverty and food insecurity. Yet, gangs expect them to abide by the lockdown and pay extortions which deepen the economic strains and heightens their vulnerability to violence. The lockdown may help curb the spread of the coronavirus, but for some, the gangs may be even deadlier than the virus.

In the Middle East, another violent Al Qaeda offshoot, Hayat Tahrir as-Sham (HTS), is also failing to confront the threat of the coronavirus. In Idlib, the last rebel-held enclave in northwest Syria, the coronavirus is testing the extremist group’s authority. HTS, religious leaders, and the population are clashing over which preventative measures to implement and how.

Nearly three million civilians are trapped in Idlib. Almost half of the population has been displaced from other parts of the country and more than two-thirds depend on humanitarian assistance. A recent Russian and Syrian regime offensive forced more than one million people to flee their home or temporary dwelling. Conditions are extremely poor, especially in informally internally displaced camps. Many IDPs are simply living rough out in the open.

The looming coronavirus pandemic will exacerbate an already highly precarious humanitarian situation. Local relief groups are bracing for the worst. They are doing their best to prepare the population for the coronavirus but they have yet to receive a serious injection of funding. Furthermore, Idlib lacks a strong and legitimate authority capable of effectively implementing preventive policies such as curfews and social distancing. HTS is the strongest armed group in Idlib and control the ground in significant parts of the province. However, it has shown little capacity to govern. Thus, the HTS-affiliated government’s order to close shops and street markets was largely ignored. Even though the group eventually moved to close markets by force, videos from Idlib show that daily life and commercial activities still continue as usual.

Similarly, the HTS apparently lacks the capacity to enforce its order to close mosques and suspend Friday prayers. Sheikhs and imams publicly defied the order in the name of Sharia law and several ex-HTS commanders and jihadi leaders challenged the group’s authority and religious legitimacy.

Unlike gangs in El Salvador, HTS cannot rely solely on brutal means to impose social preventive measures. Extreme coercion will likely jeopardize the legitimacy the group enjoys among some segments of the population and undermine its ability to control the province. Thus, HTS has resorted to a limited use of force that however proved insufficient to produce the kind of behavioral outcomes needed to effectively combat the pandemic.