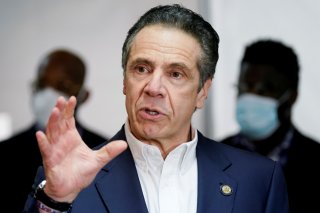 Embattled New York Gov. Andrew Cuomo’s answer as to why so many were demanding his ouster, was “Part of this is that I am not part of the political club. And you know what? I’m proud of it.”

The statement from someone who spent much of his childhood in the Albany governor’s mansion before spending most of his adult life in public office drew howls of laughter from many sides. Most of the New York congressional delegation has called for his resignation and the New York State Assembly is conducting an impeachment investigation regarding claims of sexual harassment and misreporting information about coronavirus deaths in nursing homes.

Cuomo’s potential place in history as the second New York governor to be impeached arguably has as much to do with Cuomo’s surly demeanor toward lawmakers as his present controversies. But it most certainly isn’t because this former state attorney general, former U.S. secretary of Housing and Urban Development, son of Gov. Mario Cuomo (and of Chris over at CNN) was not part of the club.

That, however, was the case in 1913, the first—and so far only—time New York impeached a governor.

William Sulzer wasn’t part of a political dynasty, but not entirely a political outsider either, having served in both the state legislature, even becoming Assembly speaker, and in Congress before his 1912 election to governor.

A disruptor in a comfortable state capital, Sulzer actually talked more like twice-impeached President Donald Trump than a career politico, declaring the “Disgraceful secret alliances between special privileges and crooked politics must cease.”

After taking office, Sulzer began firing Tammany-entrenched state employees. He also vetoed Tammany-backed legislation. He ordered investigations into Tammany Hall politicians. And he called for direct primaries to nominate party candidates instead of conventions where bosses had control. For his part, he slipped through the state Democratic convention as a compromise nominee before Tammany knew he would run as a reformer.

It was all too much for Tammany boss Charles Murphy, who was the force behind the state Legislature’s move to impeach Sulzer. Murphy needed Sulzer out, but needed a pretext.

Assembly Speaker Al Smith—who would later go on to be governor and the 1928 Democratic presidential nominee—had appointed a special committee in 1912 to investigate how money was being spent by state-funded institutions. Murphy pushed the committee to also investigate campaign contributions to candidates for public office.

That’s when the panel found Sulzer didn’t report $60,000 in contributions and used $40,000 of that to invest in the stock market. This became grounds for moving on impeachment.

While it was about the reformer vs. the club, Sulzer appears to have at least stretched the campaign laws. So, the Assembly’s move was not out of bounds. Nevertheless, Tammany politicians weren’t known for fretting so much about campaign finance laws—or any ethics for that matter. Moreover, after his ouster, Sulzer was never charged with a crime.

Upon the beginning of the impeachment inquiry, righteously wrapping himself in the cloak of a reformer, Sulzer said, “I impeach the criminal conspirators.”

The Assembly voted 79 to 45 to impeach Sulzer on Aug. 13, 1913, on charges of misusing campaign contributions, and corruptly influencing the New York Stock Exchange. In the impeachment trial that involved the state Senate and 10 justices of the Court of Appeals, Sulzer was removed from office on Oct. 17, 1913.

The next day, Sulzer cast himself as a martyr, speaking to ten thousand supporters in front of the Capitol. He was later elected back to his old seat in the state Assembly running in the Progressive Party. He unsuccessfully ran for governor again in 1914.

Hardly a boy scout, Sulzer was still able to shape a political legacy of fighting the good fight. Similarly today, Trump seems to have pushed a narrative—accepted by many of his supporters—that he fought the swamp and the swamp won.

The likelihood of Cuomo crafting such a narrative, even among the folks that back him, seems beyond reason.

Cuomo could survive an impeachment probe. Interestingly, only 35 percent of New Yorkers think he should resign. He could limp to the end of his term. But he won’t be able to martyr himself, as Sulzer did, as an outsider warrior who fought the political machine.

The very fact that Cuomo has been around politics his entire life makes it all the more puzzling he couldn’t produce a better spin for his problems than this.