Could the Coronavirus Destabilize Russia? 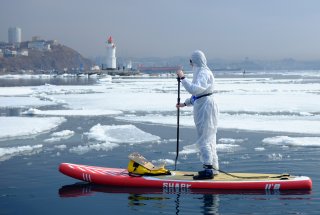 Last September, I wrote about the regional elections in Russia: I had concluded that the “results show the brittleness of the current system” and that the “continued failure to move the basis of the Russian political system beyond the person of Vladimir Putin.” Thus, “there remains no mechanism for selecting a successor to Putin and for ensuring that the current system can perpetuate itself through the mid-twenty-first century.”

Earlier this year, Putin had pushed through a series of constitutional amendments designed to give him options and choices in how to shape Russia’s post–2024 political destiny. However, the governing assumption appears to have been that Putin would have a relatively free hand over the next three years to mold and shape Russia's future. A Saudi crown prince and nature—in the form of a contagious virus—have coalesced to interrupt those plans.

As the COVID-19 virus began its deadly march around the world from China, shuttering economic activity in its wake, oil prices began to decline. The Putin team decided to roll the dice by terminating the OPEC Plus arrangements with Saudi Arabia in early March, in the hopes of gaining a better position in world energy markets. Crown Prince Mohammed bin Salman, however, has shown his own mettle for this battle—and has shown no signs of capitulation. The subsequent oil price war is driving prices well below what was anticipated and is set to plunge the Russian economy into recession. Meanwhile, the reserves that were supposed to fund the new national projects are now likely to be diverted to short-term relief.

Of course, one reason Mikhail Mishustin was appointed prime minister was to kick the economy into a higher gear. A Kremlin assessment of the results of the 2019 regional elections in Russia was that economic stagnation would pose real problems for regime stability. As the energy alliance with Riyadh frayed, the Kremlin was cautiously optimistic that Russia, already partially disconnected from the global economy as the result of sanctions, might be able to stem the entry of the virus into Russia itself. On Russian media, graphic images of the dramatic lockdowns in Italy, Spain and other parts of Europe were contrasted with the narrative that in Russia, all was well—and that the leadership had matters well in hand. In late March, Putin declared that the situation was “under control.” Even if the economy might be wobbly as a result of the oil price war, the message was that Russia could yet be spared the coronavirus crisis engulfing Western Europe.

Coronavirus, however, has come to Russia. There is a very real fear that containment measures to hold it back will be overwhelmed and the virus will overwhelm a brittle and underfunded health system—and that, combined with an economic shock (chairman of the Audit Commission and former finance minister Alexei Kudrin estimates as much as an eight percent contraction in the Russian economy due to an oil price/coronavirus double punch), can destabilize the Russian political system.

Putin himself has gone into social distancing and remote conferencing with the government after shaking hands and meeting with Dr. Denis Protsenko at the end of March during a tour of Moscow's facilities for coping with coronavirus, after he tested positive for the virus. Putin is effectively in seclusion—a presence on television screens, but not exercising his past “on the ground” style of direct management, most notably during the 2008–09 financial crisis. And now that British prime minister Boris Johnson has been sent to the hospital after displaying COVID-19 symptoms, speculation increases as to whether Putin is also possibly out sick—and what that could mean for Russian politics.

At the same time, if the response to the economic crisis and the COVID-19 pandemic fails, who is to blame? Is it a failure of leadership or of the system as a whole? And how might this impact Putin’s position—and his ability to shape the future transition?

What we have seen is a clear effort to delegate responsibility. Putin may layout general objectives—as he did during his April 2 address—but operational responsibility for coping with the pandemic has been vested in the regional governors and leaders. They have been charged with developing policies that make sense for their regions, as Putin put it. Given that Moscow is the epicenter of the virus—but also the heart of the Russian economy—it is Mayor Sergei Sobyanin, Putin’s former chief of staff, who has been developing and imposing Italian-style restrictions in an effort to combat the virus. Sobyanin also sits as a deputy head of the national coordinating commission for combating coronavirus—ostensibly chaired by the prime minister (not, as it turns out, the president), but Mishustin, whether by choice or directive, has ceded the role of the public face of the anti-COVID-19 fight to Sobyanin.

Sobyanin served for a time as Putin’s chief of staff, and he has a direct line to the president, so he is not freelancing. At the same time, however, it seems as if Sobyanin is being designated as the responsible person for the crisis—prepared to receive the blame, but also in a position to be rehabilitated if his efforts succeed for his failures during the 2019 regional elections to control Moscow and retain a commanding position for the ruling United Russia party in city government. Indeed, Putin may be using the crisis as an opportunity to stress-test Russia’s political cadres—and particularly the regional governors from whose ranks he recruits for the national government—including possible successors. Already four governors have been induced or encouraged to turn in their resignations since the start of this crisis. It also has the advantage of preserving Mishustin’s own position, as he is needed to oversee the economic development plans that the Kremlin views as vital to its survival in the coming decade.

Will this strategy work? And will Putin be immunized from criticism if the Russian response to coronavirus falls short? And how does this crisis—along with the prolonged oil price slump—affect Putin's freedom to shape Russia’s political future? These are the questions we need to be considering as we assess where Russia is going.

Nikolas K. Gvosdev, a contributing editor to the National Interest, is the Captain Jerome E. Levy chair at the Naval War College and a senior fellow at the Foreign Policy Research Institute. The views expressed are his own.