Is the CSTO on the Brink of Collapse? 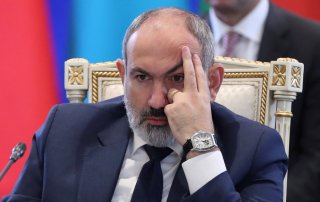 On November 23, the heads of the six member states of the Collective Security Treaty Organization (CSTO) met in the Armenian capital of Yerevan for a pivotal summit just as the Russo-Ukrainian War entered its tenth month. The CSTO meeting drew widespread attention given numerous signs of fissures within the Russian-led bloc.

The Yerevan summit was unceremoniously kicked off by local protests demanding Armenia’s departure from the CSTO over the alliance’s failure to deter aggression by Azerbaijan (a former CSTO member) amidst tensions in the contested border region of Nagorno-Karabakh. President Kassym-Jomart Tokayev of Kazakhstan made a point to call for peace talks between Moscow and Kyiv, a move Russian president Vladimir Putin has largely been resisting since his invasion of Ukraine in February. Observers noted the optics of Armenian prime minister Nikol Pashinyan appearing to physically distance himself from Putin in the summit’s “family photo” of national leaders.

The summit’s tense atmosphere was on display for all to see when Pashinyan abruptly refused to sign a joint declaration and cited the CSTO’s failure to address Azerbaijan’s actions in Nagorno-Karabakh. In a dramatic moment at the negotiating table captured in a video that has now been viewed more than 1 million times on Twitter, Putin puts down his pen in exasperation while stunned Belarussian president Alexander Lukashenko looks on in confusion.

“It is rarely possible to reach an agreement on all issues,” Putin said afterward. “But overall, the work was very intensive and useful.”

These events generated additional speculation that Russia’s post-Cold War alliance is on the brink of collapse, just one of many aftershocks of Putin’s struggling invasion of Ukraine. But, all optics and drama aside, the true likelihood of collapse should be examined carefully.

The CSTO was formed as a collective security organization in 2002 and included several of the former republics that comprised the Soviet Union. However, it is commonly understood to be Russia’s unworthy successor to the Warsaw Pact, preserving some species of Russian hegemony within the old sphere of Soviet influence which remains a cornerstone of Russian strategy. Today, the CSTO includes Russia, Belarus, Armenia, Kazakhstan, Tajikistan, and Kyrgyzstan.

Until Russia’s invasion of Ukraine this year, the CSTO seldom drew any significant attention from international media far outside the Eurasian Steppe. Though it has been popularly conceived by observers as Russia’s own Delian League of pliant vassals, its true strength as an alliance has not faced a stress test serious enough to be considered existential—until now.

Russia’s invasion of Ukraine, as with so many other ongoing global disruptions, was the catalyst. Putin’s February 24 blitzkrieg was anemic and disjointed. The Kremlin’s wildly optimistic assumptions about the trajectory of its “special military operation” were soon violently disproven. Kyiv was not captured within a matter of days, the Ukrainian government did not collapse, the Ukrainian military did not lay down its arms, and the Ukrainian people did not welcome Russian invaders as liberators.

Ten months into this calamity, the United States has estimated that a staggering 100,000 Russian casualties have been sustained, the most since World War II. Russian forces have been ejected from the entire northern front, key parts of the Donbass, and Kherson in the south. Russian-occupied Crimea is under threat and there is not a single active Russian unit in Ukraine west of the Dnieper River.

As the defiant Ukrainian tide rolls eastward, Russia’s other security challenges have not been idle. In January, as Russia was building up its forces in preparation for its invasion of Ukraine, unrest in Kazakhstan yielded a swift CSTO troop deployment. The situation was stabilized and CSTO forces withdrew two weeks later. One crisis was mollified just in time for the special military operation in Ukraine but it was a sign of things to come. Russia’s capacity to tackle security challenges across the breadth of its proclaimed sphere of influence depended on adherence to a rigid timetable of events that was blown out of the water in Ukraine.

The next serious flashpoint came from the Caucasus. Humbled from its defeat in the Second Nagorno-Karabakh War in 2020, Armenia’s tenuous position in the region again came under increased pressure from Azerbaijan in a series of intense clashes in September. Amid fresh Azerbaijani gains and reports of flagrant war crimes committed by Azerbaijani troops, Armenia has been left out in the cold.

Russian peacekeeping forces stationed in the region as part of the 2020 ceasefire agreement have been of no meaningful help while the CSTO’s largest military is currently bogged down in an aimless war in Ukraine and sustaining heavy losses. Azerbaijan’s operations in Nagorno-Karabakh were well-timed and fruitful. With a distracted and increasingly isolated Kremlin, the CSTO has been left rudderless amid the escalations in Karabakh; Baku has seemingly been given free rein to make more gains at Yerevan’s expense.

Understandably, Armenia has recently sought outside mediation from France, the European Union (EU), and the United States to lower the temperature of the Karabakh conflict. Concerningly for the Kremlin, Russia’s imprimatur for a security settlement in Central Asia is now seen as not only unnecessary but perhaps even unwanted. With Russia tied down in Ukraine and its pleas for aid gone unanswered, Yerevan increasingly views the CSTO’s collective security mission as having been abrogated largely due to the negligence and foolishness of the Kremlin. Given this apparent litany of fractures and failures, one can be forgiven for preparing the CSTO’s eulogy. But we should be cautious with such proclamations for two key reasons.

First, economic interdependence between Russia and its CSTO satellites is still strong and with Western sanctions showing no signs of abating, we should expect this to increase.

In fact, as Pashinyan himself acknowledged at the Yerevan summit, bilateral trade volume between Russia and Armenia is up 67 percent in 2022, a year-on-year increase of 55 percent. Russia remains a top-five trading partner for each member of the CSTO. For Belarus and Armenia, Russia is the number one import and export partner. Despite its deepening commercial intercourse with China, Kazakhstan has also seen its trade volumes with Russia grow while plans for increased Russo-Kazakh industrial cooperation have also been discussed. Russia’s invasion of Ukraine has not reversed but instead likely accelerated these trends. Any break with Russia’s security bloc would require a sober assessment of this fundamental economic reality that cannot be wished away.

Second, Russia’s CSTO allies lack an immediate and viable alternative to the role Russia has played as a regional hegemon and power broker.

Despite the West’s efforts to mediate the Nagorno-Karabakh crisis, regional power dynamics will continue to dictate regional security. This is hardly a profound statement but it bears repeating: There is no realistic prospect of the EU or the United States playing a substantial long-term role as Central Asia’s security broker. As if the sheer cost and logistical hassle of power projection to the region weren’t enough, a growing Western security role in the CSTO bullpen would likely clash with Russia and China and open a new theater amidst a growing global confrontation.

Western capitals are likely under no illusions about this and their mediation efforts between Baku and Yerevan probably do not signify a Central Asian shift in Euro-American security policy. Western mediation, however, has the pleasing ancillary effect of embarrassing Moscow and sowing further distrust between Putin and his increasingly restive CSTO allies.

China’s growing interests in Central Asia are certainly of importance here as the Kazakh Steppe may be the single most potent flash point for Sino-Russian tensions. China is now Kazakhstan’s largest export market and this no doubt reflects China’s potential to embrace a hegemonic mantle in the region. That said, China has not shown a serious willingness to play the role of security adjudicator and, in any event, such a move would likely injure its relations with Moscow which Beijing has been consciously aiming to avoid since Russia’s invasion began.

Ultimately, only the state with the proximity, ability, and will to bring power to bear on the region can act as Central Asia’s principal power broker. China lacks the will and the West might lack all three. That leaves Russia down but not out. Someday Russia’s brutal war in Ukrainian will end and Moscow will begin to reconstitute the capacity it gambled away. Moscow’s CSTO allies are acutely aware of this and the tyranny of geography leaves them no further away from the Russian behemoth than when the war started.

Faith in Russia’s management of the bloc is clearly trending downward but if the CSTO is to die, it will be a slow and gradual death. Its collapse is not imminent but it is doubtlessly more fragile thanks to Putin’s misadventure in Ukraine.

As with so much of Russia’s overextended strategy, it is a question of timetables. Can Russia exit Ukraine and rebuild its shattered military (and reputation) before the next great CSTO crisis strikes? Or is the alliance fated to decay as Russia’s setting sun gives way to China’s rising one? As Putin continues to roll the dice in Ukraine, the nations of the Eurasian Steppe wait and watch.