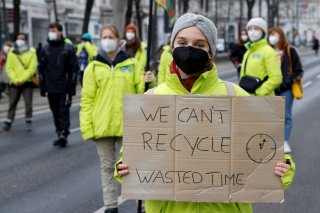 What if I said there is no climate emergency? Denier! The hordes would scream. Now let’s tone down the rhetoric. Climate science should be void of politics and more scientific. Energy policy should begin “addressing the uncertainties and exaggerations in predicting global warming, while politicians should dispassionately count the real costs as well as the imagined benefits of their policy measures,” according to the Global Climate Intelligence Group.

In the United States and European Union (EU) politicizing climate change has taken on a religious fervor that is the shibboleth of energy policies. Geological records and archives clearly show the earth’s climate has varied. As an example, approximately fifty-five million years ago, before dinosaurs, the Paleocene-Eocene Thermal Maximum era “saw average global temps as high as 73-degrees Fahrenheit.” This was before humans began populating earth about one hundred thousand years ago.

Or ponder The Little Ice Age, which ended around 1850. Is it surprising then that humans are warming, pausing the warming, or somewhere in-between? Climate change isn’t a scam since climates are constantly changing. Climate action or deciding whether or not man is causing anthropogenic global warming is where the debate should take place. Trillions of dollars are being spent and allocated with no positive influence on emissions, pollution, or the climate since “nature as well as anthropogenic factors cause warming.”

Understanding the United Nations Intergovernmental Panel on Climate Change (IPCC) climate modeling is another point of contention distorting proper energy policies in the United States and globally. These models have repeatedly overestimated the amount of anthropogenic warming. The gap is far and wide between what is understood about the climate and the modeled outcomes.

The IPCC has done a good job revealing warming is lower than previously thought, models are inadequate for setting energy policy void of politics, CO2 is food for plants and the earth, and natural disasters are not increasing.

Let’s have a real discussion within the U.S. Congress, presidency, United Nations, EU, and G7 as a starting point for deciding what are the causal effects of greenhouse gases and who is going to pay? Climates turn cooler and warmer in cycles that last centuries. Believing wind turbines and solar panels backstopped by utility-scale energy storage systems will solve these issues are void of serious discussions and plans for billions of people globally without reliable electricity. Renewables being the solution for rising emissions under current technological constraints are imagined benefits, which simply don’t exist.

Energy and climate policies should understand economic realities and the basics of energy for over 350 million people in the United States, and a world rapidly needing to provide energy and electricity for a growing planet. Energy has to meet five pillars: abundant, affordable, reliable, scalable, and flexible; otherwise, it is a fad like green hydrogen with a current price tag of $11 trillion to implement and needing all current global electrical generation for viability.

The reason the sun and the wind are a disastrous choice for energy policy is simply this—while they are abundant—they aren’t reliable since the sun and wind are intermittent. Neither are they scalable, affordable, or flexible. Additionally, the rare earth minerals needed for them to exist are under Chinese government dominion; and that is a national security disaster waiting to happen if the United States and West continue to cling to suicidal energy policies based on renewables and electrifying their entire daily existence.

This continued energy politicization in the United States and EU wholeheartedly endorsing the Paris Climate Accords and Green New Deal (GND) are baseless without understanding the United States, the largest economy in the history of mankind, representing 4 percent of the world’s population (330 million vs 7.8 billion) could literally shut down, and cease to exist, and the opposite of what most people have been told and believe will take place. Simply put, in the United States, every person, animal, or anything that causes emissions to harmfully rise could vanish off the face of the earth; or even die off, and global emissions will still explode in the coming years and decades ahead over the population and economic growth of China, India, and Africa.

It is why the American or European version of the GND will never work or lower emissions. The entire thing is based on intermittent electricity from solar panels and wind turbines, which also does not come close to working as advertised. Add in exploding implementation of coal-fired power plants from China and India and every signed or “agreed to” environmental accord or proposed energy framework means nothing.

Still, the green energy exploiters continue their quest. The question is why? Because science and energy policies are no longer being used for mankind’s betterment, understanding climate systems, or mitigation against electrical grid blackout. Instead, these are now tools of exaggeration of illiberal concepts over factual, proven energy policies.

Environmentalism has become identity politics with fraudulent claims and blackouts are the inevitable outcomes. Fight climate! Fight oppression! This has zero common sense for allocating energy and electrical resources or managing global economies. The better alternative is no longer having energy policies and discussion denigrate into personal politics and ideological belief systems over sound engineering, physics, chemistry, math, macroeconomics, and the five pillars of energy and electricity reliability.

Climate science has degenerated into a discussion based on beliefs, not on sound self-critical science. People should free themselves from the naïve belief in immature climate models.