Is a Deadly U.S.-China Arms Race Impossible to Stop? 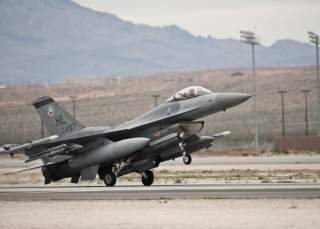 While the chances of a U.S.-China war are thankfully low, the challenges presented by a slowly brewing high-tech security dilemma keep growing. Is there any way Washington and Beijing can change course before such a contest becomes so ingrained in Asia that reversing it will prove next to impossible?

Indeed, just as the brewing U.S.-Sino security dilemma pitting anti-access area denial (A2/AD) against what was formerly known as Air-Sea Battle (ASB) has built in intensity over time, creating, testing and implementing solutions to escape such a dilemma will also take time. While many would look to qualitative or quantitative political science–based theories to solve this dilemma, I advocate an approach that seeks to demolish to some degree the foundations on which the A2/AD vs. ASB “cause and effect” dynamic is built.

I offer three possible pathways to help freeze the current security dilemma where it stands, limit its impact over time and begin to dial back its influence throughout the Asia-Pacific region.

The first pathway would be to freeze the dilemma where it is now in terms of introducing any new “game changing” weapons platforms that can only add to the problem. A clear method to halting in place this security dilemma’s self-reinforcing “cause and effect” dynamic would be to limit the impulse of Washington or Beijing to feel the need to react to new and possibly transformative weapons, like China’s DF-21D “carrier-killer” missile. One way to move in this direction would be to ban a new and even more dangerous weapons platform from becoming part of the mix: hypersonic long-range strike weapons. Such weapons, now under development by China, the United States and also Russia, could be “game changers.” Such weapons could be adapted to give a nation a true, conventional global strike capability. If used at shorter ranges, they would give little to no time for a defender to react with protective measures and may reinforce the dynamic in the A2/AD vs. ASB dilemma to reward the party that strikes first. Such weapons could create another dangerous “move, counter move” effort to defeat such weapons using technologies such as a new generation of costly missile-defense platforms, electromagnetic rail guns, directed-energy technologies systems, sophisticated jammers and other electronic countermeasure techniques to deny or limit targeting information. If such an effort were successful, such a template could be used for other such weapons systems that could present challenges for the U.S.-Sino relationship.

A second pathway to help diminish this security dilemma’s impact over time would be for the United States to ensure that any future operational concepts, strategies or doctrines aimed at the Asia-Pacific that could relate to China be released as part of a comprehensive and transparent media strategy going forward. This would hopefully limit the possibility of such concepts being misunderstood, hyped or used in a manner for which they are not intended. While the 2010 CSBA ASB report was followed by the creation of a very different ASB concept, the U.S. government did a poor job challenging the oft-repeated narratives from the CSBA report. Because of this, ASB clearly suffers from an “image problem” to this very day, where both versions of ASB are lumped together. What is meant to be an operational concept to ensure access to the global commons is instead perceived by many as a “strategy” to wage a war against China. Even U.S. alternative viewpoints (many of which have great utility), such as the idea of an “Offshore Control” strategy, which advocate a blockade approach against China use the obsolete CSBA ASB report as a type of “straw man” to strengthen their arguments. With the Pentagon working to implement a “third offset” strategy that will likely include future iterations of the ASB concept, the U.S. government has a perfect opportunity to reshape any perceptions of Asia strategy as it relates to China going forward. Such opportunities only come around at the very onset of declaring changes in operational focus and strategy.

Over the next year to eighteen months, as more details emerge regarding the third offset and how parts of what was known as the ASB concept (now known as JAM-GC) will factor into it, I would argue the Pentagon must ensure it has an effective media strategy to combat any misperceptions that will arise. Ideas must be presented with the most absolute clarity and transparency. This will ensure that future official versions of Asia defense operational concepts, doctrines or strategies are a strong part of the evolving U.S.-Sino security narrative over the years to come and are not misconstrued—something that will only reinforce negative stereotypes of ASB and make the security dilemma with China potentially far worse. To sum it up: we must learn the lessons of the ASB debate if we are going to make future changes in Asia strategic doctrine a success. So far, Deputy Secretary of Defense Robert Work’s media outreach on the the third offset has been outstanding, and I hope it will only continue.

The final pathway I would offer is to work towards ways to lessen tensions over territorial and sovereignty issues—specifically in the East and South China Seas—that could spark a crisis where A2/AD and ASB would likely be used. Chinese officials specifically list issues involving territorial claims as a reason why they are increasing their military capabilities—based on a fear that the United States would intervene in a crisis on behalf of an ally—and by default driving their A2/AD capabilities along with a U.S. counter-response. One formula that could serve as the basis for lessening tensions would be to pursue areas of opportunity where joint economic and resource development is possible, working to shift the costs of tensions into other domains, while creating a more mutually beneficial dynamic in disputed areas. While no side would abandon their own sovereignty claims, an emphasis would be placed on developing deposits of oil, natural gas and other resources jointly. This could provide a basis where confidence is built over time, which could lead to less emphasis on who owns a particular maritime feature, but sharing the mutually beneficial fruits of disputed territories. In the 1970s, Japan and China both agreed to deemphasize territorial disputes in the East China Sea as a means crafting a mutually beneficial bilateral relationship. Here Washington could work behind the scenes encouraging such a possible pathway, which could lessening tensions, reduce the perceived need for U.S. allies to increase their military expenditures in a time of strategic uncertainty and by default work to reverse the U.S.-Sino security dilemma in the process. While such ideas have been advocated in the past, I would advocate a new approach: the enlistment of various multinational energy companies in an effort to demonstrate to claimant countries the possibilities and benefits of joint resource exploration and energy extraction, shared pipelines and energy transportation modes.

Clearly there is no more important bilateral relationship than that of America and China—hence the need to ensure a high-tech security dilemma does not become an accepted part of this relationship. While the above three ideas are only a small sample of possibilities that could be put forward, the key is that we must keep trying. No one in Asia would benefit from a toxic U.S.-China high-tech security dilemma. The only way to escape such a trap is to look for any and all ways to lessen tensions so Beijing or Washington do not feel the need to keep building stronger and deadlier weapons platforms. No idea is too crazy, no suggestion too small. It is through an exchange of ideas that we can reach some sort of escape velocity and work to really build what Beijing loves to call a “new-type of great power relations.”