Deter Russia in Ukraine and Avoid a Sino-Russian Dual Alliance 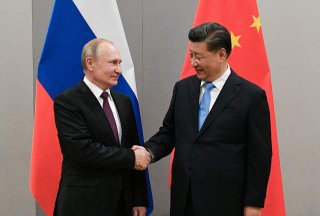 Russia’s military buildup in Crimea and on Ukraine’s borders is again raising questions about the immediate intentions of Moscow and of its modern tsar, Vladimir Putin. It may be that the Russian dictator sees in the coronavirus-induced disarray in Europe an opportunity to push his influence westward, or he may seek to distract Russians from their economic problems with another imperial project, or, perhaps, he is merely irritated at the description of him as a “killer” by President Joe Biden.

But from the perspective of Washington, a renewed Russian offensive on Europe’s eastern frontier raises also a set of wider, more global in nature, questions: is this another symptom of an entente between Russia and China, eager to create multiple problems for the United States and its allies? And, what should the United States do to avoid a potential strengthening of a tacit cooperation hostile towards Washington?

Short of an official treatise marking the beginning of a twenty-first-century Dual Alliance between Russia and China, we can only surmise the level of their strategic coordination from their actions. It seems to be opportunistic at this point: a Russian military operation in Eastern Europe may be watched carefully by Chinese leaders in order to see what openings it creates for them in, for instance, the South China Sea. Vice versa, a greater American and Western preoccupation with Chinese moves in the Pacific or the Middle East may give the Kremlin a sense of permissiveness in its preferred European theater.

A tighter partnership between Russia and China is unlikely because it would be highly uncomfortable for Moscow. Putin would be the junior partner of Xi Jinping: the provincial thug, short on cash, tying Russia’s fortunes to an aspiring global emperor with deep coffers and an oceanic outlook. Such an association would damage the fraying domestic support for Putin, whose waxing and waning popularity depends on the Russian economy and perceived prestige. Moreover, becoming second fiddle to China, Russia would turn into an Asian power, focused inward on the Eurasian continent, undermining the historic quest to be a great power in Europe. Vassalage to China is not a glorious foreign policy achievement that Putin wants to inscribe in history books.

But the possibility of opportunistic cooperation remains. The question then is whether the United States and its allies can avert or hinder such collaboration. Wooing Russia with concessions, for instance granting Moscow greater influence over Ukraine and the Black Sea, and more broadly, along Europe’s eastern frontier, will not do the trick. A grand bargain of this nature not only ignores the aspirations of the nations in this region—the “in-betweens” in derogatory terms—but also will not deflect Russian ambitions to be the great power in Europe and will only signal that further Russian westward expansion is acceptable. It would not be a trade-off, exchanging greater Russian sway in Europe for Russian cooperation against China, but a free gift to Moscow.

The best way to inhibit Russian opportunistic cooperation with China is to close for Moscow the possibility of a westward expansion. Deter Russia in Ukraine and along Europe’s eastern frontier, and Russia may refocus its attention and resources on its Asian theaters.

As long as Russia sees the West as a politically decadent and military feeble grouping of squabbling nations, it will continue to push toward Europe using a whole spectrum of tools, including armored divisions. And to ease this westward impulse, Russia will seek some sort of accommodation with China in order to keep its eastern borders stable. But when Russian leaders realize the impossibility of imperial expansion on their western frontier, they will see less value in accommodating China and helping its continued rise. In fact, they may pay more attention to China’s economic and political forays in Central Asia, in Siberia, and more broadly across the Eurasian landmass. The goal of deterring Russia is therefore not only to prevent further destabilizing actions on the part of Moscow but also to redirect Russian attention to its other borders.

The only way Russia will be deterred is if European states themselves take action. The role of the United States is certainly important: it should continue to support Ukraine with arms and to back NATO allies by strengthening its presence on the eastern flank.

But the weakness of the Western alliance lies in the strategic disarray of Europe, rhetorically opposed to Moscow’s aggressiveness but practically divided and for the most part very reluctant to face the reality of a Russian military offensive. For instance, Germany can express its preoccupation with the current Russian military buildup in Crimea while at the same time putting the finishing touches on the Nord Stream 2 gas pipeline, which undermines the security and economy of Ukraine (as well as fellow NATO and EU members in Central Europe): a mixed message at best. If Berlin were serious about Ukraine’s (and Europe’s) security, it would cancel this Russian pipeline.

Ultimately, Europe needs to arm Ukraine. If the United States is the only power supplying relatively modest amounts of arms (e.g., anti-tank Javelin missiles), Russia sees a split, and therefore an opportunity, in the Western alliance: European powers (Germany, France, the UK) willing to accommodate Moscow while the United States is the outlier, the distant potentate increasingly focused on Asia and lacking support in European capitals. But if a select group of European states, for instance, the “Weimar Triangle”—Germany, France and Poland—cooperate in providing lethal aid to Ukraine, the message to Moscow is clear: there is firm European will to counter further imperial aggression. The long-term stability of Europe has to come from European sources.

The Biden administration would do well, therefore, to continue Trump’s efforts to convince European allies to increase their defense spending and to take their security seriously. For the United States, Europe’s security is tied to Asia’s balance of power. A European theater that invites Russian aggression creates the conditions for Sino-Chinese opportunistic cooperation, which poses immense challenges for the United States. The goal is thus to stabilize Europe, deter Russia, and then focus on China.

Jakub Grygiel is a professor of politics at The Catholic University of America, a senior advisor at The Marathon Initiative, and a visiting fellow at the Hoover Institution.