Did Mueller Just Hand Democrats What They Need to Impeach Trump? 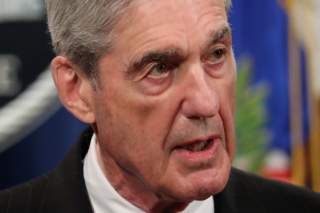 This morning former Special Counsel Robert Mueller took to a podium at the Department of Justice (DOJ), his first public statement since being selected to investigate allegations of collusion between President Donald Trump and the Russian government. Mueller did not do Trump any favors, but he also did not administer a knockout blow. His statement that his investigation was unable to exonerate Trump is already prompting a number of Democrats to ramp up their calls for an impeachment inquiry—something that House Speaker Nancy Pelosi is continuing to resist. She stated on Wednesday, “The Congress holds sacred its constitutional responsibility to investigate and hold the president accountable for his abuse of power. The Congress will continue to investigate and legislate to protect our elections and secure our democracy. The American people must have the truth.” House Judiciary chair Jerry Nadler went further, indicating that he believes that the "special counsel has clearly demonstrated that President Trump is lying."

Mueller’s first point of emphasis was that he is no longer the special counsel. “I am speaking out today because our investigation is complete. The Attorney General has made the report on our investigation largely public. We are formally closing the special counsel’s office, and as well I’m resigning from the Department of Justice to return to private life,” he said.

The language Mueller chose was evenhanded, nuanced, and incredibly circumspect. Describing the contents of the report, Mueller described Russian intelligence-orchestrated hacking of the Democratic National Committee emails “as alleged” in the indictment by the grand jury. An indictment against a foreign intelligence agency will not conceivably be brought to trial, so there will not be a conclusive verdict on the veracity of the charges. Mueller including “alleged” multiple times in his statement shows he’s taking the letter of the law incredibly seriously. “These indictments contain allegations, and we are not commenting on the guilt or innocence of any specific defendant. Every defendant is presumed innocent unless, and until, proven guilty,” said Mueller of the Russians. He added that he does believe there is sufficient evidence to charge conspiracy on their part.

What followed was a brief about the special counsel’s conclusions (or lack thereof) about whether President Trump committed obstruction of justice. “And as set forth in the report, after that investigation, if we had had confidence that the president clearly did not commit a crime, we would have said so. We did not, however, make a determination as to whether the president did commit a crime,” Mueller said. This specifies that investigators did not feel comfortable giving the president a “full exoneration,” to use Trump’s phrase. As Mueller explained, it is longstanding DOJ policy that a president cannot be charged with a crime while in office; it would be unconstitutional to do otherwise, Mueller believes. “Charging the president with a crime was therefore not an option we could consider.”

This federal policy has left many people concluding that it was only his office that saved Donald Trump from being indicted. But Mueller intimated that even if there was no policy against it, it’d be inappropriate to charge an office such as the presidency. “And beyond department policy, we were guided by principles of fairness. It would be unfair to potentially accuse someone of a crime when there can be no court resolution of the actual charge,” he explained. This is deference to the legislative imperative to check a president’s power through impeachment, not through the traditional court system. “That is the office’s final position, and we will not comment on any other conclusions or hypotheticals about the president.”

Regarding the controversy over the report’s release, and Attorney General William Barr’s conduct that resulted in the House Judiciary Committee voting to hold him in contempt, Mueller said: “We appreciate that the Attorney General made the report largely public, and I certainly do not question the Attorney General’s good faith in that decision.” It had previously been revealed that he wanted the report released piecemeal, unlike Barr who wanted it released all at once. Mueller said further that he does not believe it’d be appropriate for him to offer comment on the actions of the Justice Department or Congress.

While leaving open the possibility that he would testify before Congress in the future, Robert Mueller made clear that his testimony would not be revelatory or new. “Any testimony from this office would not go beyond our report,” he said. “The report is my testimony.” He said definitively that he would not reveal any information that is not already public.

“It definitely increases the odds that there will at least be an impeachment inquiry in the House, even though he didn't say anything that wasn't in the report,” said James Antle, editor of The American Conservative. “Democrats are taking this as a hinted impeachment referral. Unless Trump melts down in response, nothing has happened to make Senate Republicans any more likely to convict.”