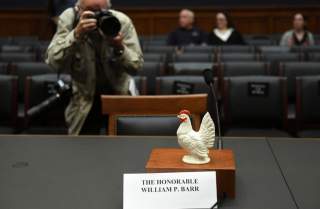 Attorney General William Barr appeared before the Senate Judiciary Committee on Wednesday to discuss the Justice Department’s handling of the Mueller Report. The hearing sparked controversy after The Washington Post revealed that Special Counsel Robert Mueller was unhappy with the four-page memo that Barr wrote prior to the release of the Mueller Report. Mueller complained about how the report was being represented in a letter to the Justice Department. “The summary letter the Department sent to Congress and released to the public late in the afternoon of March 24 did not fully capture the context, nature, and substance of this office’s work and conclusions,” the letter stated, according to The Washington Post. “There is now public confusion about critical aspects of the results of our investigation. This threatens to undermine a central purpose for which the Department appointed the Special Counsel: to assure full public confidence in the outcome of the investigations.” The letter preceded a fifteen-minute phone call between Barr and Mueller.

During his opening remarks, Barr touched on multiple issues in an attempt to put out the media and political fires surrounding the report. First, he explained that the Mueller Report had been released to the fullest extent: only 10 percent of the report was redacted. Only a fifth of that total redaction was in Volume II relating to obstruction of justice, while the bulk was in Volume I due to ongoing investigations. And for members of Congress, only 2 percent of the full report was redacted at all due to grand jury testimony. According to Barr, when Mueller gave the Justice Department the full report, he said three times, emphatically, that “he was not” saying he would have found obstruction of justice if not for department policy against indicting a sitting president. Further, Barr emphasized that his memo was not a summary of the Mueller Report as it was widely described in the media. Instead, it was only supposed to make the report’s “bottom-line conclusions” public. Barr reiterated that Mueller declined to read the memo before its publication.

When speaking to Ranking Committee Member Dianne Feinstein (D-CA), Barr explained why he did not find President Donald Trump’s instruction to White House Counsel Don McGahn to be obstruction of justice. Even if what occurred did not rise to the level of obstruction, said Feinstein, “[y]ou still have a situation where a President, essentially, tries to change the lawyer’s account to prevent further criticism of himself.” “Well that’s not a crime,” said Barr. “So you can, in this situation, instruct someone to lie,” asked Feinstein, looking for clarification. “No,” responded Barr, “to be obstruction of justice the lie has to be tied to impairing the evidence in a particular proceeding.” At the time, McGahn had already given his full testimony to the special counsel, so even if Trump had asked him to lie publicly about events, it would not be with regards to the investigation.

Multiple senators interrogated Barr regarding his previous congressional testimony in front of the House Appropriations Subcommittee on Commerce, Justice, Science, and Related Agencies. When Congressman Charlie Crist (D-FL) asked Barr about Special Counsel investigators disgruntled by how the memo represented the full report, as alleged by anonymous sources in the New York Times, Barr claimed ignorance. It’s now known that Barr was fully aware of Special Counsel Mueller’s objections. Sen. Patrick Leahy (D-VT) said Barr’s denial to Crist was “purposely misleading.” When Barr said he did not consider the two questions related, since he was aware of Special Counsel Mueller’s objections but not those of his staff, Sen. Sheldon Whitehouse (D-RI) responded with, “I can’t even follow that down the road. Boy, that’s some masterful hair-splitting.” Concerning the importance of the letter, which Barr later described as “snitty” and “probably written by a staffer,” Senator Dick Durbin (D-IL) quipped that “[a]ttorneys don’t put things in writing unless they’re pretty serious about them. There’s an old saying in politics: a good politician doesn’t write a letter and doesn’t throw one away.” Durbin further challenged Barr regarding his denial that the original four-page memo was a summary. The memo was meant to “summarize the principle conclusions” of the report, quoted Durbin directly from the document.

Speaking to Sen. Richard Blumenthal (D-CT), Barr recounted his conversation with Mueller. Barr claims that when asked directly, Mueller said the memo was not “inaccurate.” In Barr’s interpretation, Mueller’s gripe was not with the Justice Department’s actions or the contents of the memo, but with how the media was overblowing the conclusions and misleading the public. Apparently, Mueller did disagree with the strategy of releasing the memo (which he also referred to as a “summary”) instead of the executive summaries contained in the report itself. Barr chose the former strategy over the latter because it was his wish to release the redacted version of the report all at once. He believed releasing parts of the report in a piecemeal fashion would only create more confusion and suspicion. When Blumenthal asked if notes were taken during the phone call, Barr responded affirmatively. Blumenthal then asked if the committee could have those notes, to which Barr immediately blurted, “No.” When asked why not, Barr gave a dismissive shrug and said, “Why should you have them?”

The Attorney General was the subject of withering criticism during the hearing. The worst came from Sen. Mazie Hirono (D-HI). “Mr. Barr, now the American people know that you are no different from Rudy Giuliani or Kellyanne Conway or any of the other people who sacrificed their once decent reputation for the grifter and liar in the Oval Office . . . you lied to Congress,” Hirono said. “You told Charlie Crist that you didn’t know what objections Mueller’s team might have to you March 24 so-called summary . . . But I wasn’t surprised. You did exactly what I thought you’d do. It’s why I voted against your confirmation.”

During the proceedings, Republican members took a different line of questioning. Sen. John Cornyn (R-TX) thanked Attorney General Barr for helping to “restore the department’s reputation as an impartial arbiter of the law and not as a political arm of any administration.” Sen. John Kennedy (R-LA) proposed that the Trump administration “release all the documents that the FBI and the Justice Department [have] pertaining to the 2016 election. Now you can redact national-security information, but just release them. Instead of us going through all this spin, and innuendo, and leaks, and rumors, let’s just let the American people see them.” Sen. Ted Cruz (R-TX) slammed the “Kavanaugh treatment” that William Barr was receiving. In Cruz’s view, Barr releasing the full 448-page report, including the executive summaries Mueller initially requested, makes the Democrat’s argument moot.

Barr originally planned to appear before the House Judiciary Committee this morning but changed his mind after the conclusion of his Senate testimony. Numerous Democratic presidential candidates have called on Barr to resign his position following his performance before the Senate, including Sens. Kamala Harris (D-CA), Elizabeth Warren (D-MA), Cory Booker (D-NJ), Kirsten Gillibrand (D-NY), Amy Klobuchar (D-MN), and Michael Bennett (D-CO), along with former Vice President Joe Biden.