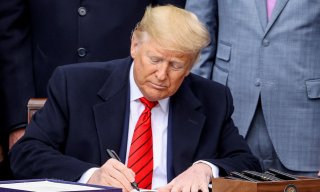 Glenn Youngkin’s impressive win in the Virginia gubernatorial race immediately sparked talk about what it means for the Republican Party’s future.

Key among those is what does it tell us about the ultimate question for the next presidential race: Will Donald Trump run again?

The Virginia outcome presents questions and potential answers about Donald Trump and 2024. Here are five to consider.

1. Was Trump relevant in Virginia either way?

A major takeaway is that Youngkin not only won back suburban voters who were Republican-friendly before Trump but he outperformed Trump in rural Virginia. He might have carried the Latino vote, though exit polls have conflicting data on that. Trump didn’t do a rally in Virginia, and other than releasing a few pro-Youngkin statements, stayed out of the governor’s race.

But, he was still very much part of the race. Vanquished Democratic candidate Terry McAuliffe, a former governor, couldn’t stop talking about Trump.

Trump appeared in most of McAuliffe’s ads. When the Democrat A-team, including President Joe Biden and former President Barack Obama, stumped for McAuliffe in the state—they also insisted the affable Youngkin was Trump in sheep’s clothing.

So, the forty-fifth president hovered over the campaign without stumping for Youngkin.

But those suburban swing voters that abandoned Republicans because of those mean tweets and other silly behavior in 2020 didn’t care about Trump in 2021.

2. So, does this mean Trump is less relevant in the GOP?

Democrats overestimated Trump’s relevance, while Youngkin—a political rookie—adroitly threaded the needle between not offending the Trump base, but not going Make America Great Again (MAGA).

Despite the wishful thinking of readers of The Bulwark, Trump is still relevant. But, to the disappointment of avid Trump supporters, the Virginia race shows his presence isn’t necessary to rally the base GOP voters.

That said, if Youngkin had decided to be a Liz Cheney Republican, he would have likely alienated the Trump base, drawn the former president’s wrath—and probably would have lost the election if those voters stayed home.

Moreover, the barrage of McAuliffe ads calling Youngkin another Trump might well have encouraged some Trump backers to head to the polls to support Youngkin, who is a rather Romney-esque looking Republican. On the other side, when Trump wasn’t on the ballot, Democrats just weren’t that inspired to swarm to the polls.

3. Did Trump actually show some selfless discipline with the Virginia race that could benefit a 2024 run?

Selfless and discipline are rarely words associated with Trump. So, in this case, we can at least say he showed uncharacteristic restraint.

On October 27, Trump sparked enthusiasm among Democrats and dread among Republicans with a statement saying in part, “Thank you, Arlington, see you soon!”

McAuliffe falsely claimed Trump was on the way. Trump made headlines, which is probably what he wanted. He temporarily distracted attention from Youngkin’s message. But, bottom line, he didn’t show up and put the GOP campaign at risk.

That’s important when looking at a potential 2024 Trump candidacy. Can he show discipline he didn’t in the past?

A big reason Trump lost in 2020 is that he just couldn’t get out of his own way. The reason he never polled 50 percent, despite a roaring economy in the pre-Covid-19 years, is that he was constantly his own worst enemy.

The tweeting, the petulance, the hurt feelings all on public display were all unnecessary and self-inflicted wounds. Moreover, it didn’t just harm Trump but trickled down the Republican ticket, particularly in 2018.

The fact is that Trump can be a big help to Republicans in certain parts of the country and a big hindrance to Republicans in other parts. Instead of recognizing this, he frequently acted downright jovial about Republicans that lost—and blamed them for not embracing Trumpism. Recall, “Mia Love gave me no love and she lost, too bad,” referring to the former Utah Republican congresswoman defeated in 2018.

Had Virginia gone the other way in 2021, he almost certainly would have blamed Youngkin for not having him in the state to campaign.

However, in the case of Virginia, Trump seemed somewhat disciplined and selfless enough to sit this one out. After the fact, he of course took credit for the Virginia victory, but no one is implying he has metamorphosized into a portrait of humility.

Perhaps Trump correctly strategized he would have been blamed if Youngkin lost after a MAGA rally in the commonwealth. That’s at least discipline, even if it’s not selfless.

The 2022 mid-terms will be a bigger test if he can continue this. Trump thus far seems selective about what primary candidates to endorse—usually a candidate somewhat likely to win.

But, he could build goodwill for a 2024 run in cases where his chosen candidate doesn’t win a primary. Will he go scorched earth or give at least a tepid endorsement to the Republican nominee to have a fighting chance?

That could be the difference between projecting the image of a kingmaker vs. a wrecking ball.

4. What does Virginia’s outcome say about Trump’s invincibility in a GOP primary?

Virginia showed that Republicans can win a high voter-turnout election in a blue-leaning state, as 55 percent of the state’s eligible voters cast ballots—the highest of any governor’s race since 1997.

Again, Youngkin outperformed Trump among rural and suburban voters and women. Youngkin had clear policies on cultural issues as well as tax-cutting economic issues. No two election years are exactly alike, but the GOP could do a lot worse in looking for a roadmap for a national comeback.

Trump brought in new working-class voters and non-white voters that didn’t normally vote Republican, while he managed to alienate the suburban voters that felt more comfortable with Mitt Romney-style Republicans. The trick to winning a majority would be keeping and growing each without losing the other. It only took a year after Trump’s loss for an example of that to emerge in Virginia.

The conventional wisdom is that Trump is unstoppable in a 2024 Republican primary, and if he runs he will clear the field of any serious competitors.

If Florida Gov. Ron DeSantis, Arkansas Sen. Tom Cotton, or, well, Youngkin, decide to jump into the presidential primary and take on Trump, they might be rewarded. That’s particularly true if these candidates have a conservative vision and Trump can’t stop talking about being a victim in 2020.

Today, the hot commodity on the Right is DeSantis. By late 2022 or mid-2023, it might be someone else. A Trump primary opponent doesn’t have to be—and shouldn’t be—a knee-jerk Never Trumper. Voters reward boldness not spite and want to vote for someone not just against someone.

5. Does Virginia indicate whether Trump could win if he ran again?

Not directly, but the governor’s race was more of a referendum on the first ten months of the Biden presidency than on four years of Trump. So, from that perspective, it depends.

Biden won Virginia by 10 points over Trump. Whoever the Republican nominee is in 2024, he or she won’t likely carry the state’s nine electoral votes.

The result does prove the flawed belief of McAuliffe and Democrats that saying Trump, Trump, Trump enough times in a blue state would be a winning strategy. This shows that maybe Trump isn’t quite as toxic as once assumed.

Yes, Trump incites both irrational, deranged hatred on one side and an enthusiastic, near cult-like fawning love on the other. But those are just two categories of voters from 2020.

A third category is Trump voters that may or may not go to a rally in town, probably won’t wear the MAGA hat, and sometimes wince at his uncouthness. But they voted to keep him in 2020 because they thought he was getting the job done.

It’s the fourth category that is really up for grabs. These Biden voters didn’t quite have an irrational seething hatred for Trump, but just grew tired of the constant drama and thought Biden seemed harmless enough. For some of these voters, mean tweets might not seem so bad about now.

Biden fumbled through the opening months of his presidency. He had a disastrous Afghanistan exit. He looked like a bystander while a civil war played out in the party he is supposed to lead. While it appears the infrastructure and whittled-down social spending bills will both pass before the end of the year, neither seems to resonate with the public.

If inflation continues to spike, new taxes on employers harm the economy, and assorted examples of corporate welfare boondoggles become the face of the Biden spending legislation (as happened with Obama’s 2009 Recovery Act), it could be difficult for Democrats to run a winning 2024 campaign.

It seems unlikely that Biden would run for a second term in his eighties and Vice President Kamala Harris isn’t particularly popular. If the economy doesn’t improve, it’s not that difficult to imagine Trump making a compelling case that before an unforeseen pandemic, times were quite good on his watch.