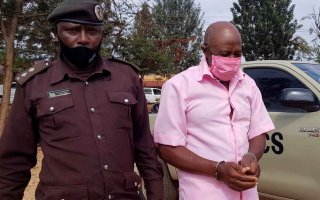 A Federal District Court in Dallas, Texas, sentenced five members of the Holy Land Foundation to sentences between fifteen and sixty-five years in prison for “providing material support to Hamas, a designated foreign terrorist organization,” on May 27, 2009.

As the charity siphoned money to support terrorism, it told supporters that it sought to “implement practical solutions for human suffering through humanitarian programs that impact the lives of the disadvantaged, disinherited, and displaced peoples suffering from man-made and natural disasters.” Many in the academic, activist, and even diplomatic communities believed them. The charity preyed on the gullible, but the evidence presented was overwhelming.

U.S. law on providing support to designated terror groups is clear. 18 U.S. Code § 2339B declares that “Whoever knowingly provides material support or resources to a foreign terrorist organization, or attempts or conspires to do so, shall be fined under this title or imprisoned not more than 20 years, or both, and, if the death of any person results, shall be imprisoned for any term of years or for life.”

As the trial of Paul Rusesabagina, the hotelier made famous by the 2004 film “Hotel Rwanda” continues, some of his most vocal American supporters might soon find themselves in legal jeopardy. Whatever heroism Rusesabagina displayed at Rwanda’s Hôtel des Mille Collines—his depiction by Hollywood is the subject of debate—evidence suggests his subsequent effort to leverage his fame into power crossed the line into terror support. To focus on his actions a quarter-century ago to the exclusion of the case at hand is just lazy journalism.

Some journalists have offered a broader, more thorough perspective. Joshua Hammer, for example, who, in 1994, had covered the anti-Tutsi genocide in Rwanda published a thorough and expansive piece in the New York Times Magazine earlier this month. He charts the evolution of Rusesabagina and hints at the naiveté if not cynicism of his supporters: Neither Kitty Kurth, senior communications and strategy advisor for the Hotel Rwanda Rusesabagina Foundation (HRRF), nor Brian Endless, a Loyola University lecturer and senior adviser for the Foundation, have ever apparently been to Rwanda. Both, however, amplify Rusesabagina’s conspiracies about an anti-Hutu genocide which they accuse Rwandan President Paul Kagame of orchestrating.

HRRF, meanwhile, has like the Holy Land Foundation, been notoriously opaque. There is no evidence it has carried out charitable activities in Rwanda (or elsewhere). According to the ProPublica non-profit database, the last year HRRF filed a tax return with the Internal Revenue Service was 2013. That evidence shows Rusesabagina transferred money to the U.S.-and UN-designated Democratic Forces for the Liberation of Rwanda, which raises questions about where those funds came from and if the charity played any role. That evidence, which dates back a decade and which led to Rusesabagina’s questioning in Belgium, should have been reason enough for any HRRF advisors or officers to demand a fundamental audit.

In the Daily Beast, Carine and Anaïse Kanimba chastised the Biden administration for failing to secure Rusesabagina’s release, but it is telling they do not dispute the evidence presented against their father such as the money transfers or his calls to military action. “Our family lives and breathes American,” they wrote. “We are a family of faith and service born out of the ashes of grief—and we know the drive for democracy that the Biden family and administration cherishes.” The basis for democracy, however, is rule-of-law, and it certainly does not include using the United States as a shield against the financing of terror. That was a lesson the Holy Land Foundation financiers learned and it may very well be the next step after Rusesabagina’s trial ends. The victims of terror in Rwanda, much of it in recent years allegedly financed by Rusesabagina and those on trial alongside him, deserve no less.