Does the U.S. Defense Budget Match Its Global Commitments? 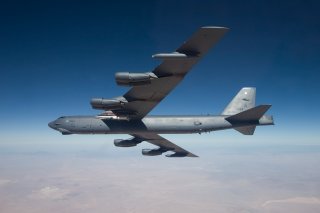 Deterrence is the art of preventing enemies from acting against the interests of the United States and its allies. It is most often referenced with regards to the nuclear balance. The United States’ nuclear arsenal and its NATO allies deterred the Soviet Union from using conventional force to invade Western Europe during the Cold War. The U.S. “nuclear umbrella” or extended nuclear deterrent worked for more than seven decades and remains today a mainstay of U.S. policy in Europe.

American security arrangements in the Western Pacific are less formal, but the United States has promised—consistent with its Constitutional procedures—to assist and defend Japan, the Republic of Korea, and the Republic of China from aggression, whether from North Korea or China. The United States maintains a series of bases and a military presence in the region, in addition to the nuclear deterrent protecting its Pacific allies.

Though the growing threats from Russia and China over Ukraine and Taiwan, respectively, are much in the news, less discussed are the threats the United States has created of its own accord that make it difficult to provide security.

These longstanding threats to U.S. policy and budget have become more acute in the past three decades since the collapse of the Soviet empire and the assumed “end of the Cold War.”

The policy issues are serious. The United States has failed to be clear about what security threats it faces and what it is willing to do. In the decade after the collapse of the Berlin Wall and the Warsaw Pact, there was much talk about the “end of history” and worldwide acceptance of the post-World War II international order.

The United States went on what former Air Force general Garrett Harencak described as a “procurement and policy vacation,” where it stopped thinking about security and investing in its own protection. Defense spending was cut nearly $1 trillion from 1991-2001. Harencak was particularly concerned about the nuclear arena, but the United States also let its conventional forces age, its infrastructure crumble, and its industrial economy be hollowed out, even as our educational standards declined, opioid addiction climbed, and family formation suffered.

By 2016, the Air Force was the smallest and oldest it had ever been. The Navy declined to under 300 ships and also significantly aged, just as China was emerging with a significant blue water navy projected to now be the largest in the world.

Meanwhile, nuclear weapons proliferated to North Korea and Pakistan with Chinese help, adding to threats facing the United States. Russia, led by Vladimir Putin, invaded Georgia, Moldova, and Ukraine. China seized more and more of the South China Sea in a bid to control shipping and navigation in a region projected to have five billion people and $35 trillion in GDP by 2030.

These outside threats would have been difficult enough on their own, but the American failure came at home. The United States has made these security risks much more difficult to deter.

First, there is still no clear picture of what security threats should be prioritized, and how to shield the country from emerging cyber, electromagnetic pulse, and financial dangers, as well as dealing with the traditional conventional threats that face Ukraine and Taiwan.

The 2018 Commission on “Providing for the Common Defense” outlined security dangers facing the United States. It concluded that the current American military, with its present security commitments, would possibly lose confrontations with China and Russia.

A vigorous debate over American security priorities would be a welcome step. Although there is considerable criticism of continued American support for NATO, (and many of the arguments are seriously ill-informed), that issue needs to be fully debated.

And yes, while it is true that some NATO members don’t pay their fair share of the costs, defense spending in Europe is rising in large part because of pressure from Washington. The U.S. alliance of NATO democracies in Europe demonstrates to democracies in the Indo-Pacific that the United States can be relied on for security assistance.

NATO now faces a near-peer competitor in Russia. That means that lessons learned in Europe can be applied to the Indo-Pacific. The NATO alliance is also the linchpin for the future of alliances involving the Space Force.

Second, the United States has failed to get its budget in order as it kicked the policy can down the road. I arrived in the U.S. Senate as an intern in 1970. At that time, any spending legislation—known as appropriations bills—could be brought up for a vote in the House or the Senate when ready to move.

Not content with that nearly 200-year-old process, Congress did two things in 1974. It sued in court to prevent the president from impounding money. The Impoundment Control Act of 1974, upheld by the courts, prevented the president from overriding Congress’ power of the purse with his own decisions. It also created budget committees in the House and Senate as well as the Congressional Budget Office, which duplicated the role of the Office of Management and Budget. It set up a parallel budget process in Congress that would start the yearly clock on considering an administration’s budget proposal following the budget submission the first week in February.

The process required a budget resolution to be agreed to that allocated to each appropriations subcommittee an agreed-upon spending level. Now entitlements such as Medicare, Medicaid, Social Security, and the entirely of means-tested poverty programs, (now at $1.9 trillion annually) were outside this process. This type of spending stayed completely out of the annual budget process.

The result is now known as logrolling. Every subcommittee chair wanted more money to make donors happy. Everyone added spending to their bill; the bills were then all lumped together, and with that much pork greasing the wheels, spending always went up as no member of Congress wanted to get in the way of the logs rolling downhill.

Fast forward nearly fifty years later and the budget process is completely broken. As spending bills of some kind have to pass each year, they have become the train upon which everyone wants to get a ticket—the one must-pass piece of legislation becomes the vehicle for everything that Congress wants to pass. This creates a huge omnibus spending bill, often written in the dead of night, consisting of thousands of pages of legalese and pork with no spending limits in sight. In 1974, the total U.S. debt was $475 billion. It is now $28.5 trillion.

The sixty-vote requirement to bring up annual spending legislation in the Senate (apart from the reconciliation process), increases the pressure to pack everything into one piece of legislation. Oversight gets junked and votes on specific policy issues also gets dumped over the side in the annual effort to pass spending bills.

Congress gets around this to a degree by passing what are known as “continuing resolutions” (CRs). They continue spending at the same pace as the prior year but with some additional barriers to smart government. No new programs can be started. This means a defense system in research and development scheduled for acquisition is stopped cold, needlessly remaining there, delaying the deployment of new weapons systems. Now a full spending bill is needed to rectify the current imbalance in the defense budget where joint space requirements are paid for by one service—the Air Force—while its base budget gets shortchanged.

The result is that when annual funding is renewed—probably in February 2022, when the current CR expires—several months have passed without sound funding being approved. This includes forgoing more than $30 billion in new FY 2022 spending for the defense authorization bill approved this past week by Congress (363-70 in the House and 86-13 in the Senate) over and above the spending level for FY2021.

What Congress ought to do is repeal the 1974 Budget Control Act and shutter the committees and Congressional Budget Office. Appropriations subcommittee chairs should simply bring their bills to the floor of the House and Senate when they are ready and secure their passage. If you cannot get your ducks in a row and get the money bills passed in subcommittee and committee, other bills should move forward. Perhaps the art of compromise will return where the incentive will be to get an appropriations bill done soonest, so the authorizing committees can do the oversight required by the constitution.

Military leaders have pushed for acquisition to be fast, fast, fast. That also should apply to the legislative process in Congress. America’s competitors are not waiting around for the United States to get its act together.

If the United States is seriously contemplating adding $100 trillion in additional new spending to the federal budget over the next seventy years on dubious green energy programs, then it can spend an additional $30-$45 billion each year to build a military that President John F. Kennedy said must be “second to none.”