The China Connection: How AQ Khan Helped the World Proliferate 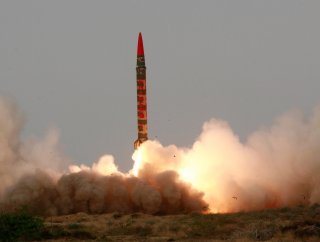 Two nuclear stories are again emerging as key issues for the United States. First, the Iranians have developed an enrichment capability that leaves them only several months away from a nuclear warhead, to complement the largest ballistic missile inventory in the region. And second, North Korea, already with an arsenal of nuclear warheads, is testing lots of new missiles, some reportedly capable of deploying a nuclear warhead and reaching the U.S. mainland.

Both threats are serious, and their origins are connected.

The common thread is AQ Khan, a nuclear scientist and the father of Pakistan’s nuclear weapons, who died just recently at eighty-five.

Global non-proliferation strategy has historically sought to control the production of nuclear fuel used for nuclear energy and power plants. Uranium could be enriched, or plutonium reprocessed to make nuclear bomb fuel; If the process was strictly monitored, the chances of weapons material being produced deliberately or surreptitiously would be significantly curtailed.

This process was codified in the 1970 Treaty on the Non-Proliferation of Nuclear Weapons, or NPT. One would think that the NPT has been particularly successful. A half-decade after President John Kennedy’s 1963 warning that the world could soon see a number of nations pursue clandestine nuclear weapons programs, only three have—officially—proliferated: Pakistan, India, and North Korea. Israel, who has neither confirmed nor denied its nuclear weapons capabilities, makes for a fourth proliferator. Notably, none of those four states are parties to the NPT. (South Africa, which once possessed nuclear weapons, was persuaded to give its weapons up in unprecedented fashion.)

Thus, today it is not just the five permanent members of the UN Security Council—Russia, China, the United States, France, and Britain—that are all nuclear-armed nations. Pakistan, India, North Korea, and Israel bring the total to nine.

According to Tom Reed, the former U.S. secretary of the Air Force and deputy national security adviser to President Ronald Reagan, China decided in 1981 to arm its ally Pakistan with nuclear weapons and to proliferate further nuclear weapons technology to such nations as Libya, North Korea, and Iran. For China, providing nuclear weapons to nations that were opposed to the United States was a perfectly reasonable tool of statecraft to hinder U.S. military capability and diplomatic influence.

AQ Khan and Pakistan used China’s help to create what could be described as “Nukes ‘R Us”—an organization that first developed a nuclear arsenal for Islamabad but then transferred that nuclear weapons know-how and technology to other nations. These counties were all allied with the Soviet Union and China, state sponsors of terror, and in conflict with the United States.

Take North Korea, for example. North Korea traded its ballistic missile capabilities, technologies secured from the Soviet Union and China, to Pakistan in exchange for nuclear weapons know-how with China’s blessing. This served Pakistan’s goals of building the missiles needed to deter its Indian neighbor while North Korea gained the means to intimidate the Republic of Korea and deter the United States.

Libya, too, bought centrifuges with which to enrich uranium from a Malaysia supplier working with the Pakistani Khan network. A U.S. and Italian effort in late summer 1983 discovered a ship (the BBC China) carrying the equipment, and found the centrifuges were destined for Libya to Muammar Ghaddafi himself. Yet Libya’s program had not progressed very far, and, as one George W. Bush administration official relayed, Ghaddafi gave up his nuclear program after seeing Saddam dragged from his spider hole in Iraq by U.S. Marines.

The Iranian saga is different. Iran’s program was put together clandestinely so that by 2003 the country had an official policy of developing a small arsenal of five nuclear warheads. Internal opposition groups in Iran warned the West of the Iranian program, and subsequently, United Nations inspectors confirmed Iran’s ongoing enrichment efforts.

Yet after 2003, the Iranians took their nuclear program further underground and continued their efforts to secretly build a nuclear arsenal. As the world discovered just a few years ago, after a daring Israeli raid on a warehouse where Iran stashed its nuclear documents. Despite the Iranian efforts, surprise cyber and other attacks against Iranian nuclear facilities have rolled back the program, even as ongoing UN inspectors are given only partial access to Iranian nuclear technology.

Recognizing how China engineered or assisted these states’ proliferation is important because it reveals how Beijing has used nuclear weapons as a tool of diplomacy and statecraft. Islamabad and the Khan network together built nuclear bombs for Pakistan and helped spread the technology around the world. China, in many respects, was the ringleader of this nuclear circus, which might now explain Beijing’s relatively casual attitude in issuing nuclear threats against Japan, unless the latter declares an “unconditional surrender for the second time.”

Peter Huessy is President of Geostrategic Analysis and Director of Strategic Deterrent Studies at the Mitchell Institute. These views are his own.