Don’t Fall For Erdogan’s Not So Charming Offensive 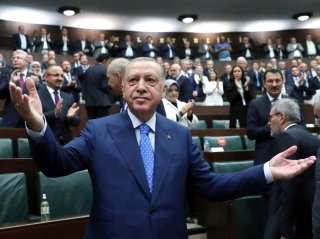 Turkish president Recep Tayyip Erdogan is on a charm offensive. In recent weeks, the autocratic leader has been making a concerted public effort to mend strained ties with regional powers and re-engage Washington in the hopes of resuscitating the moribund U.S.-Turkish relationship. This would be welcome news if Erdogan was addressing the policies that led to his nation’s fractured ties, but he isn’t. Erdogan is playing double-games on a range of international issues in the hopes of bolstering his status—and that of his AKP party—ahead of Turkey’s June 2023 elections. President Joe Biden and democratic leaders should not be taken in by his efforts.

Erdogan sees Turkish relations with Israel, and his own relationship with Israeli president Isaac Herzog, as a central component of his strategy. He has dispatched his foreign minister this week to Jerusalem for the first visit by a Turkish official in fifteen years. Israeli leaders see little cost in engaging in an exercise of rapprochement. At worst, it gives Israel a period of relative calm from an actor that can worsen a host of issues. At best, it creates an outside chance of restoring some semblance of the productive bilateral relationship that existed before Erdogan’s rise. But it is hard to see how the latter occurs if Erdogan does not address Turkey’s blatant anti-Israel and anti-Semitic discourse and behavior—including his own comments and Ankara’s persistence in playing host to Hamas terrorists.

As Erdogan seeks to turn vinegar into wine, the Biden administration is seeking congressional approval for a $400 million sale of air-to-air missiles and other upgraded radar and software technology to improve Turkey’s current fleet of F-16 fighter jets. And a larger sale of modern F-16s requested by Turkey, with radars similar to that of the F-35 stealth fighter, looms on the horizon. This is despite Turkey being kicked out of the F-35 program in July 2019 after it took delivery of Russian missile defense systems. The United States was and should remain justifiably concerned about co-locating the F-35 with advanced Russian systems. Similar concerns over the latest version of the F-16 should be considered by Congress. It was not long ago that arms sales to Turkey of any kind were frozen by Congress, and the underlying reasoning for that freeze has not changed.

Greek prime minister Kyriakos Mitsotakis recently addressed a joint meeting of Congress, a first for a Greek leader, and his warning was clear, “the last thing that NATO needs at a time when our focus is on helping Ukraine defeat Russia’s aggression is another source of instability on NATO’s Southeastern flank. And I ask you take this into account when you make defense procurement decisions concerning the Eastern Mediterranean.”

In addition to his ties with Moscow, Erdogan is using Turkey’s membership in organizations like NATO to realize unrelated concessions from the West. Ankara is recklessly standing in the way of Finland and Sweden’s accession to NATO membership, which has the support of the Biden administration and will be ultimately approved. Rather than agreeing to a quid pro quo, Washington should exact a toll on Erdogan for muddying the waters at a key historical moment for Finland, Sweden, and the NATO alliance.

Showing such disunity in the face of Russia’s horrific war against Ukraine is irresponsible, misguided, and contrary to Turkey’s short- and long-term interests. Erdogan’s intransigence will not score him any points amongst policymakers who are weighing the arms sales that he covets. In fact, it is accelerating the spread of anti-Turkish sentiment. As former U.S. ambassador to Turkey Eric Edelman pointed out, “There is broad support for Finland and Sweden in Congress, and many members would like nothing better than to trade Turkey as a member for the two Nordic states.”

Until Erdogan makes permanent and verifiable changes to Turkey’s support for jihadists and terror groups, flouting of U.S. sanctions on Russian arms purchases, destabilizing actions against allies in the eastern Mediterranean, and undermining NATO unity, the United States must take a step back. To avoid a conditional approach to arms sales, economic packages, and trade deals, Erdogan should remember the adage to “show, don’t tell.”

If one day Erdogan takes actions that back up his outreach, the United States should respond in kind. Until then, Erdogan’s silver tongue is a reminder of who he really is and whose side he’s on.

Boris Zilberman is the director of public policy and strategy at the Christians United for Israel Action Fund.