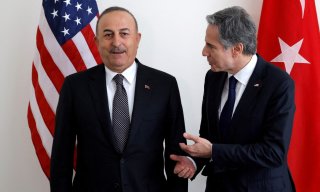 Turkish president Recep Tayyip Erdogan reiterated his opposition to the NATO bids of Sweden and Finland earlier this week, casting the alliance’s Nordic expansion into doubt.

“We will not say ‘yes’ to those [countries] who apply sanctions to Turkey to join security organization NATO,” Erdogan said at a news conference, seemingly invoking Sweden’s support for restrictions on arms sales to Turkey over Ankara’s military intervention in the Syrian Civil War.

Turkey has previously criticized Stockholm and Helsinki for harboring and supporting Kurdistan Workers Party (PKK) militants that it describes as terrorists and criminals. The PKK is a separatist, ethno-nationalist, and Marxist movement seeking an independent state within Turkey. Ankara, which, along with the United States and EU, designates the PKK as a terrorist organization, has accused the two Nordic countries of ignoring its requests for the extradition of PKK-affiliated figures. Turkish media outlets have further alleged that Sweden supplied weapons to a PKK “terror outfit” responsible for staging attacks against the Turkish military in Syria from 2017 to 2021, and that illicit activities in Sweden comprise a large part of the PKK’s revenue stream. Ankara has also castigated Finland for hosting individuals tied to terrorist organizations and sanctioning PKK demonstrations across the country.

“Will they come to persuade us? Excuse us, but they shouldn’t bother,” Erdogan added, referring to the stated plans of Finnish and Swedish officials to fly to Ankara in an effort to dissuade him from blocking their NATO accession. Swedish foreign minister Ann Linde said on Saturday that her country considers the PKK to be a terrorist organization and reaffirmed Stockholm’s readiness to engage in substantive talks with Turkey, though she did not commit to redressing any of Ankara’s specific grievances.

Secretary of State Antony Blinken met with Turkish foreign minister Mevlüt Çavuşoğlu on Wednesday to clarify Turkey’s position. “Yes, we see the threat in our region, and that’s the reason we see that Finland and Sweden want to be NATO member, new member,” said Çavuşoğlu in New York before the meeting. “You know, Tony, Turkey has been supporting the ‘Open Door’ policy of NATO even before this war.  But with regards to these possible candidates – or already candidate countries – we have also legitimate security concerns that they had been supporting terrorist organizations.  And there are also export restrictions on defense products,” Çavuşoğlu added.

NATO chief Jens Stoltenberg, who previously said Finland and Sweden would be “warmly welcomed” if they chose to apply, indicated this week that Turkey’s objections will derail the alliance’s ambitious plan to process the two Nordic countries’ applications within several weeks. “We are addressing the concerns that Turkey has expressed, because when an important ally [like] Turkey raises security concerns, raises issues, then of course the only way to deal with that is to sit down and find common ground,” Stoltenberg told reporters in Denmark.

President Joe Biden struck an optimistic tone when asked this week about Turkey’s concerns. “I’m not going to Turkey, but I think we’re going to be OK,” Biden said.

It remains unclear if Turkey, which fields the second-largest army in NATO and has positioned itself as a key mediator in sputtered peace talks between Russia and Ukraine, is categorically opposed to Finno-Swedish accession. Turkish officials have reportedly suggested that Ankara is open to compromise pending substantial Western concessions. “We want to reach an agreement ... The sooner we can reach an agreement, the sooner the membership discussions can start,” an official said, according to the Financial Times. But experts have noted that there could be a dissonance between the messaging of Turkish diplomats and Erdogan’s final position. "I don't exclude a possible disconnect between Turkish diplomats and Erdogan. In the past there have been examples of such disconnect," Turkish journalist Barcin Yinan told NPR.

It is likewise unclear if Finland and Sweden are willing to make the kinds of concessions that would be sufficient to potentially appease Ankara. “Any move that could be construed as kowtowing to Erdogan could be unpopular with Swedish voters,” noted The Washington Post. For Stockholm to reverse its weapons exports restrictions or to give in to Erdogan’s extradition demands would, in effect, be to publicly admit that it was strong-armed by a state widely described by Western observers as “autocratic” and “authoritarian.”

This type of appeasement is unlikely to go over well at a time when NATO is embroiled in what Western politicians have continuously branded as a global confrontation between democracy and autocracy triggered by Russia’s invasion of Ukraine. “If an authoritarian nation like Turkey can block democracies like Sweden and Finland from joining NATO, it might be time to rethink our membership requirements,” tweeted former congressman Will Hurd. Others have pointed to a moral hazard facing the alliance: entertaining Erdogan’s ultimatum vis-à-vis Sweden and Finland could whet his appetite for broader demands, including the reversal of arms export restrictions implemented by other NATO members.

What could come next? NATO’s leadership and Western governments may try to pressure Ankara into relenting. Biden can put the brakes on an F-16 export deal with Turkey that he previously asked Congress to approve. A more serious punitive measure would be to limit Turkey's participation in NATO’s interoperability planning and joint exercises. Yet these moves could backfire; Erdogan may choose to double down instead of backing down, as he did in response to Western sanctions following his 2017 decision to import Russia’s S-400 missile defense system. The ensuing fallout would not only torpedo Finland and Sweden’s NATO bids, but risks driving a permanent wedge in NATO’s solidarity. There is no established mechanism for expelling a NATO member, nor is it likely that Erdogan would opt to leave on his own, but an aggrieved Turkey could weaken the alliance from within for decades to come.

NATO’s expansion into Finland and Sweden was presented by top officials as a rapid and uncontroversial outcome that would clearly strengthen the alliance at a time of simmering tensions in Europe. What is emerging instead is a fraught, drawn-out process with potentially serious consequences for NATO’s long-term cohesion.