Don’t Give an Inch: Biden and Xi Facedown at Bali 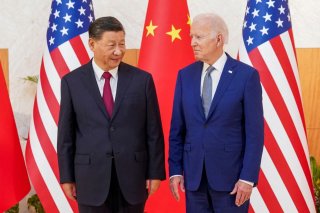 Almost two years into his presidency and only a few days since the U.S. midterm elections, President Joe Biden met with President Xi Jinping of the People’s Republic of China (PRC) on the sidelines of the G-20 meeting in Bali, Indonesia.

The significance of this summit between the leaders of the world’s two largest economies cannot be overstated. This was Biden’s and Xi’s first in-person encounter since the former was elected president (Biden has repeatedly touted his substantive experience with his Chinese counterpart when they were still vice presidents ten years ago) and the discussion is taking place at a critical juncture in the U.S.-PRC relationship, which is arguably in its worst state since normalization began in 1979. Tensions have heightened across the board over developments related to military affairs, economics and trade, technology, Taiwan, governance, and human rights.

House Speaker Nancy Pelosi’s visit to Taipei in August further eroded bilateral ties and nearly escalated tensions into a military confrontation. In response to the visit, Beijing launched live-fire military drills in the vicinity of the Taiwan Strait and suspended channels of contact with Washington. In its newly released National Security Strategy and National Defense Strategy reports, the Biden administration identified the PRC as America’s most “consequential challenge” and the “only competitor with both the intent to reshape the international order and, increasingly, the economic, diplomatic, military, and technological power to do it.” The United States has also tightened its control over technology exports while persuading and rallying allies and partners to do the same. Last month it restricted Chinese access to cutting-edge semiconductor technology and equipment that are decisive in determining the military and economic dominance in the twenty-first century.

Hence, prior to the meeting, neither Washington nor Beijing got their hopes up for a breakthrough or to issue a joint statement outlining areas of common interest. Rather, the objective of the meeting, according to the White House, was to responsibly manage the U.S.-PRC competition and keep the lines of communication open to avoid veering into conflict. Nothing can substitute for a face-to-face talk and Biden underscored the importance for him and Xi to candidly “lay out their red lines” so that each can better understand their respective “critical national interests” and work out thorny issues without making fundamental concessions.

Foreign policy is very much an extension of domestic politics. Thus, emboldened by their political successes and standing at home—the midterm elections for Biden and the 20th National Congress for Xi, who claimed a norm-breaking third term as China’s supreme leader and consolidated absolute power over the all-powerful Politburo Standing Committee—both expected to utilize their renewed political mandate or capital to leverage their strategic concerns and initiatives. The president “is going out on this trip with the wind very much at his back,” said National Security Advisor Jake Sullivan.

Yet, it seems that both Biden and Xi walked away from their meeting with the same slew of contentions and disagreements they arrived with.

To be sure, according to the readouts issued separately by the White House and China’s Foreign Ministry, there were some tacit areas of convergence. This included the presidents’ agreement to maintain regular and open lines of communication, and address through joint working groups transnational challenges relating to climate change, global macroeconomic stability, public health, and food security. Secretary of State Antony Blinken is due to visit China in early 2023 to follow up on these discussions. In his remarks after the summit, Biden told the press that “I absolutely believe there need not be a new Cold War,” a point that was also noted in the Chinese statement. That certainly alleviated the frozen interactions that had been in place since the Pelosi crisis. They also exchanged views on the Russo-Ukrainian War. However, according to the U.S. statement, both Biden and Xi “reiterated their agreement that a nuclear war should never be fought and can never be won and underscored their opposition to the use or threat of use of nuclear weapons in Ukraine” while the PRC’s description only focused on the complexity of the conflict and the stressed on pushing for “peace talks” between Russia and Ukraine and “comprehensive dialogues” among the United States, NATO, European Union (EU), and Russia. The two readouts also varied on North Korea, with the United States raising concerns about Pyongyang’s “provocative behaviors” and reiterating Washington’s “ironclad commitment to defending our Indo-Pacific allies,” as Beijing did not mention the issue at all. Additionally, there was no update on whether the tariffs from the Trump administration on Chinese imports will be removed.

The toughest sticking points remain the two states’ divergence over Taiwan and democracy. In these two areas, Xi sounded impatient and almost bellicose. Biden reaffirmed the One-China policy and its “objections to the PRC’s coercive and increasingly aggressive actions toward Taiwan which undermine peace and stability across the Taiwan Strait and in the broader region, and jeopardize global prosperity.” The president, however, generously dispelled Beijing’s “imminent attempt to invade Taiwan.” In contrast, Xi asserted, “Anyone that seeks to split Taiwan from China will be violating the fundamental interests of the Chinese nation; the Chinese people will absolutely not let that happen … Cross-Strait peace and stability and ‘Taiwan independence’ are as irreconcilable as water and fire.” Biden, based on the Chinese account, even committed to what seems to be a Clinton-era “three no’s” language that Washington “does not support ‘Taiwan independence,’ does not support ‘two Chinas,’ or ‘one China, one Taiwan.’” The White House did not corroborate these formulations. Xi also rejected Biden’s “democracy vs. authoritarianism” depiction of world affairs, contending “the whole-process people’s democracy practiced in China [as opposed to the American-style democracy] is based on the country’s reality, history and culture, and it reflects people’s will. We take great pride in it.” It was a direct repudiation of Biden’s call out of Beijing’s human rights violations in Tibet, Xinjiang, and Hong Kong.

What really came out of this in-person Biden-Xi summit, aside from platitudes and aspirational promises, was that neither president caved to the other on their country’s vital interests. Their political standings at home have certainly reinforced their resolve and credibility but what set this meeting apart from the previous five remote Biden-Xi summits remains to be seen.

Dean P. Chen, Ph.D. (Associate Professor of Political Science, Ramapo College of New Jersey) is the author of US Taiwan Strait Policy: The Origins of Strategic Ambiguity (Lynne Rienner Publishers, 2012) and US-China Rivalry and Taiwan’s Mainland Policy: Security, Nationalism, and the 1992 Consensus (Palgrave Macmillan, 2017). His new book, US-China-Taiwan in the Age of Trump and Biden: Towards a Nationalist Strategy (Routledge, 2022) informs some of the observations outlined in this article. Email: [email protected].