Is Donald Trump Really Trying to Start a Coup? 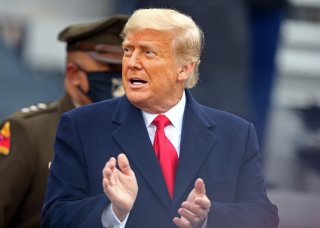 If Donald Trump is trying to help the Republican Party retain the Senate, then he has a curious way of going about it. His latest maneuver is to announce that he will disclose the “real numbers” of the November presidential election at a rally tonight in Georgia, where he is supposed to stump for Kelly Loeffler and David Perdue. He may also publicly ridicule the number of over 350,000 coronavirus deaths, which he called “fake news” on Sunday, prompting his Surgeon General Jerome Adams to state, “I have no reason to doubt those numbers.”

The stakes could hardly be higher. What was envisioned as a way for Trump to bolster their campaigns could turn into a potential nightmare for the GOP. Trump’s incessant claims that the election was rigged threaten to plunge the Republican Party into a civil war.

Trump has been continually ratcheting up tensions. His prolonged phone call with Georgia Secretary of State Brad Raffensperger has triggered calls that he is trying to engineer a coup with his edict to “find” votes for him and Reps. Ted Lieu (D-Calif.) and Kathleen Rice (D-N.Y.) have requested that FBI Director Christopher Wray launch a criminal probe into Trump, a request, incidentally, that will play into the hands of Trump’s serial denunciations of a deep state that is intent on ousting him from power. Some leading Republicans are defending Trump. Sen. Ron Johnson said, “We are not acting to thwart the Democratic process, we are acting to protect it.” Sen. Josh Hawley (R-Mo.) is leading the charge for Trump. But Sens. Mitt Romney (R-Utah) and Lisa Murkowski (R-Alaska) have adopted a hard-line against Trump.

Then there is Sen. Tom Cotton (R-Ark.) who released a statement explaining that supporting the effort to overturn the election on Jan. 6 would violate the principles that the GOP is supposed to represent. Cotton pointed out that overturning the electoral college would simply embolden Democratic efforts to abolish it entirely. He also noted that it would empower federalism over the rights of states. Above all, it “would essentially end presidential elections and place that power the hands of whichever party controls Congress.” Trump, as is his wont, responded to Cotton’s musings with a threat: “Republicans have pluses & minuses, but one thing is sure, THEY NEVER FORGET!”

To up the pressure on legislators, Trump is also pushing his supporters to show up on Jan. 6. “Will be wild,” he announced on Twitter. Washington mayor Muriel Bowser is pleading with locals to avoid downtown and a number of streets will be closed to vehicular traffic to allow the Trump protests to proceed. But a variety of Trump-supporting organizations, including the Oath Keepers and the Proud Boys, are planning for as much wildness as possible. There is even a group called WildProtest, which is apparently affiliated with Roger Stone, that is trying to stir up the faithful: “Our presence in Washington D.C. will let Members of Congress know that we stand with Rep. Mo Brooks and his colleagues in the House of Representatives who will bravely object to the certification of the Electoral College.” A map on the website of the U.S. Capitol area features a black arrow pointing to where protesters should assemble. Invited speakers include everyone from Rep-Elect Marjorie Greene, a Q-Anon supporter, to Joe Flynn to Rep. Paul Gosar.

Into this volatile mix comes a letter from no less than ten former defense secretaries declaring that the election is over. “Recounts and audits have been conducted. Appropriate challenges have been addressed by the courts. Governors have certified the results. And the electoral college has voted. The time for questioning the results has passed; the time for the formal counting of the electoral college votes, as prescribed in the Constitution and statute, has arrived,” they write. But the sentiments that they voice are not being accepted by many in the GOP itself.

With protests in DC and the Georgia vote, Trump has placed himself front and center. Joe Biden has prudently absented himself from Trump’s antics. His clear wager is that Trump is flaming out in a spectacular fashion. Trump has animated the Republican base but the first test of his strategy will come in Georgia.