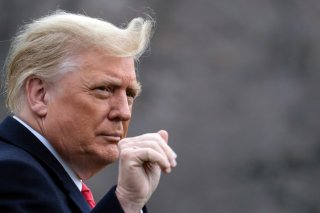 New Year’s Day may have marked the beginning of the end of Donald Trump’s power. On January first, the Republican-led Senate voted 81-13 to join the Democratic-led  House in overriding the president’s veto of the National Defense Authorization Act (NDAA) for fiscal year 2021. It was the first override of a Trump veto.

Ironically, the bill was named after a Republican, Mac Thornberry, the highly respected outgoing ranking member of the House Armed Services Committee. Thornberry had long been recognized as a thoughtful defense expert. Whether as chairman or as ranking member of the committee, he successfully worked with Adam Smith, his Democratic opposite number, as well as with his Republican and Democratic Senate counterparts to pass in timely fashion five consecutive highly complicated and progressively lengthy defense authorization bills.

The president vetoed the FY 2021 bill purely out of pique: in particular, he was furious that the bill did not terminate Section 230 of the 1996 Communications Decency Act, which protected social media firms that put warnings next to his outrageous and generally fallacious assertions. Nor did it put an end to the effort to rename bases currently bearing the names of Confederate generals, frustrating yet another of Trump’s efforts to fire up the racist elements of his adoring base.

Surprisingly, more Democratic senators voted to uphold the president’s veto than their Republican counterparts. Evidently, Senators Elizabeth Warren and Ed Markey of Massachusetts, Oregon’s Jeff Merkley and Ron Wyden, as well as Cory Booker, Bernie Sanders and Chris van Hollen’s collective dislike of the military was so great that it outweighed their disgust with the president. Similarly, Alexandria Ocasio-Cortes, and her squadmates Representatives Rashida Tlaib, Ilhan Omar and Ayala Pressley, card-carrying progressives all, were among the very few Democrats who swallowed whatever reservations they might have had about the president and voted to support his veto.

In the meantime, faced with the override, Trump reacted in his usual infantile way. On the same day, he vetoed a bipartisan bill that would have begun the process of ending the use of large-mesh drift gillnets deployed in federal waters off the coast of California, one of his favorite betes noire, thereby needlessly endangering a host of marine species. In fact, the use of such nets is illegal elsewhere in American territorial waters. Clearly, if the increasingly unmoored president could not retaliate against Congress, he would vent his frustrations on the fish instead.

And then on Sunday, January 3, he returned to his primary, indeed only, preoccupation, his quixotic effort to overturn the results of the presidential election. In an hour-long call he alternately threatened and cajoled Georgia Secretary of State Brad  Raffesnperger, himself a Republican, to “find” Trump enough votes to overturn the results of the November 3 presidential election. Raffensperger’s refusal to do so in the face of powerful presidential pressure was not merely a true profile in political courage. It also was an indication that there was still at least some hope that with the passage of time once a Biden Administration took office that the Republican Party might yet return to its former responsible and serious pre-Trumpian self.

Whether that hope will ever be realized is, of course, hardly a certainty. Nothing Trump has done since November 3 indicates that his behavior will be any more measured after January 20. He will do all he can to stoke his base, likely with an eye to the 2024 election. To that end, he will stop at nothing to command the publicity that is his electoral oxygen. Whether the media will continue to furnish that oxygen, or instead choke him off by relegating him to the sidelines where he belongs, remains to be seen and could determine not only the future direction of the Republican Party but of the stability of the Republic as well.