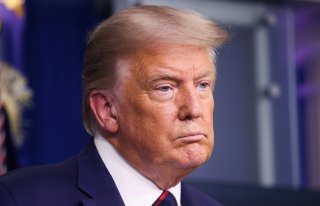 To everyone’s surprise, Department of Defense officials announced that the United States will bring 6,400 troops home and move 11,900 personnel currently stationed in Germany to other locations. Secretary of Defense Mark Esper confirmed that removing the troops from the NATO ally will take “some time” to complete and cost “billions.” The move lacked “a strategic underpinning,” according to Atlantic Council distinguished fellow, Hans Binnendijk, and “could undercut a half decade long effort to prevent war by enhancing NATO’s deterrent posture in the Baltic area.” He noted that NATO’s “deterrent posture is already fragile.” Russia stands to benefit from this ill-advised decision. In fact, Russia’s Foreign Ministry said the Russian government welcomed President Donald Trump’s plan, according to the Associated Press.

Vice President Joe Biden would never make such a decision to the detriment of the country. Biden said, “diplomacy requires credibility . . . Donald Trump has absolutely corroded our country’s credibility.” And, he is right. The U.S. military presence in Germany is one of America’s most important overseas deployments, serving as an anchor force in Europe, as well as a hub for the Middle East and Africa. Moreover, the NATO alliance is a crucial deterrent against Russian aggression. By pulling out U.S. troops and walking away from U.S. responsibilities, Trump has bankrupted the United States’ credibility and reliability, providing ample fodder for Russia’s alternative narrative. In a recent op-ed, Biden correctly noted that “the Kremlin fears a strong NATO, the most effective political-military alliance in modern history.” Of course, this is only true when Trump is not up-ending the alliance and destroying its coherency.

U.S. commanders in Europe are calling this their “nightmare scenario” and are concerned about a “quick Russian land grab in the Baltic states followed by Russian propaganda, a Russian call for a cease fire, and a nuclear threat,” according to Binnendijk. All of this culminating together he assesses is “designed to divide NATO in time of crisis” and make it ineffective and incapable of deterring Russian aggression.

Since the beginning of Trump’s presidency, U.S.-German relations have deteriorated, as have our relationships with other European nations. These deteriorating relationships and the impending drawdown come at a concerning time when “pro-Kremlin entities are seizing on COVID-19 to inflame existing political divisions,” in part of a propaganda campaign to “increase anxieties about NATO troops throughout Eastern Europe,” according to CyberScoop Associated Editor Jeff Stone.

As Trump comes under pressure domestically for his failed response to COVID-19, also known as the coronavirus, he is jeopardizing NATO to fulfill a misguided campaign promise. Deutsche Welle’s Bernd Riegert noted that “four years ago, Trump promised to bring ‘millions of dollars’ spent on NATO back to the U.S.” However, he adds that this claim is disingenuous—even if it does fool some of his supporters—because there are “no fees that the U.S. can reclaim for stationing its soldiers in Europe.”

The threat posed by Russia is apparent and NATO has a clear strategy on how to counter it. And, to that end, Biden is right to focus on “keep[ing] the alliance’s military capabilities sharp while also expanding its capacity to take on nontraditional threats, such as weaponized corruption, disinformation, and cybertheft.” Biden has also underscored that “[w]e must impose real costs on Russia for its violations of international norms and stand with Russian civil society, which has bravely stood up time and again against President Vladimir Putin’s kleptocratic authoritarian system.”

Trump has alienated the United States from its allies and has claimed responsibility for the increase in commitments by NATO members, which Biden was instrumental in negotiating during the Obama administration. Biden argued that “alliances transcend dollars and cents” and that NATO is critical to U.S. national security. That is why Biden should be president. He will ensure that NATO, “the bulwark of the liberal democratic ideal” is strengthened and the partnership made powerful, so that “partnerships built by coercion or cash” are rendered inept.

Ashley Burrell, a former staff assistant with the Department of State’s Bureau of Counterterrorism and Countering Violent Extremism, is a communications specialist and organizer focused on peace and security. She is a board member of Women of Color Advancing Peace, Security, and Conflict Transformation.