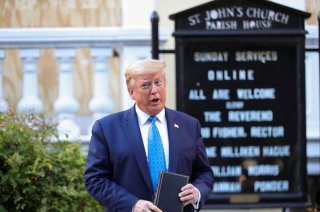 Many former senior officers and government officials have rightly protested Donald Trump’s calling upon the military to clear Lafayette Square on Monday night. There is yet another deleterious consequence of the president’s high-handed decision to have troops confront peaceful American protesters. It is the impact that his actions may have on our fighting men overseas.

The United States military has been a leader in ensuring that the American melting pot continues to function as originally intended. To that end, it has boasted senior officers from all races and religions. It has had an African-American chairman of the Joint Chiefs, Colin Powell; numerous general and flag officers from all Christian denominations. Asian American officers, including a Japanese-American Army Chief of Staff. A Jewish Chief of Staff of the Air Force; Muslim officers as well.

The military is one of the oldest federally integrated institutions in the United States. Harry Truman integrated the military on July 26, 1948, a time when segregation was rife, especially in the South. Indeed, when Truman signed Executive Order 9981 on July 26, 1948, lynchings were commonplace in the South. It is perhaps a sad commentary on the state of contemporary civil rights in America that a federal anti-lynching law has yet to appear as a federal statute. It was only earlier this year that the House of Representatives passed the Emett Till Anti-Lynching Act.

Truman’s  Executive Order opened with the words: “Whereas it is essential that there be maintained in the Armed Services of the United States the highest standards of democracy, with equality of treatment and opportunity for all those who serve in our country’s defense…it is hereby declared to be the policy of the President  that there shall be equality of opportunity in the armed services without regard to race, color, religion or national origin.” Today, African-Americans comprise a significant percentage of all serving men and women. They fill every rank from buck private to general or flag officer. They are everywhere, in every service.

As so many commentators have already noted, the military’s purpose is to defend the nation against foreign enemies, not its own citizens. That is what America’s highly professional volunteer military has expected to be its mission. That is what troops around the world, most notably in Afghanistan, Iraq, Syria, Korea, and sub-Saharan Africa believe they are fighting for.  And dying for.

What President Trump has unleashed could devastate military cohesion. One need only recall the military of the 1960s to recognize the great damage the president is inflicting on the troops he leads as commander-in-chief. During those troubled years, when black men formed a significant percentage of the drafted military, there were race riots both on land and at sea. The 1968 killing of Martin Luther King set Africa-American troops on edge. To make matters worse, some whites in Vietnam’s Cam Ranh Bay celebrated the assassination by parading in makeshift Ku Klux Klan sheets while flying Confederate flags. In July 1969 black Marines rioted in Camp Lejeune, North Carolina, the Corps’ major east coast base. Three years later, a race riot broke out on the aircraft carrier Kitty Hawk when one of the ship’s 308 black sailors wanted two sandwiches but was told by a white mess cook that he was only allowed one. A shouting match broke out when the sailor grabbed an extra sandwich, and soon the ship was engulfed in violence.

Today’s military, precisely because it is a volunteer force of all races and creeds, is far more disciplined than the draft-induced military of the 1960s. Nevertheless, it is only to be expected that many if not most  African-American troops, and not only African-Americans troops, have been shocked by the video of George Floyd’s death in Minneapolis, as well as by the commander-in-chief’s misuse of the military to quell the demonstrators in Lafayette Park.

The president has shown no concern over the impact of his actions on those he commands who are standing in harm’s way. It is therefore up to his senior civilian and military advisors to sensitize him to the dangerous impact of his behavior on military morale and unit cohesion, which remain the ultimate key to successful military operations against America’s enemies abroad.