Don't Rush to a Peace Treaty on North Korea 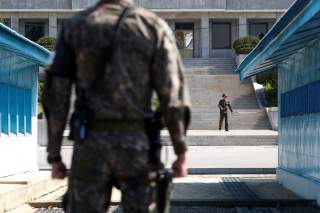 Today’s sixty-fifth anniversary of the signing of the Korean armistice is fueling speculation that an official end to the war may be forthcoming. There is value in signaling intent toward such a treaty in the future, but it would be foolhardy for the United States to rush into dismantling the armistice and the relative stability it has provided—especially before North Korea has undertaken any significant denuclearization.

It is self-evident that of the two prongs of its North Korea policy, the Trump administration has invested a great deal more thought and energy into “maximum pressure” than it has into “engagement.” Six weeks out from the June 12 Singapore summit, both President Donald Trump and Chairman Kim Jong Un are reportedly disappointed with the rate of progress that negotiations have produced. Recent satellite imagery that purportedly shows North Korea dismantling its Sohae Satellite Launching Station provides just a glimmer of any meaningful step toward denuclearization.

The glacial pace of progress comes as little surprise to most U.S. experts who were understandably concerned about the lack of preparation prior to the historic meeting between Trump and Kim. Summitry certainly gave the two adversarial leaders an opportunity to break the ice and initiate diplomacy, but it was not going to resolve decades of hostility or bring North Korea’s treasured nuclear program to a grinding halt. Indeed, North Korea’s negotiation strategy is predicated on using détente as a means of demanding more for doing next to nothing. Clearly, Pyongyang delayed the promised return of the remains of some U.S. servicemen missing in action to reinforce the anniversary of the armistice it hopes to replace.

Even within Trump’s own party, many are concerned that the president will settle for a deal that is detrimental to U.S. national interests. These anxieties are being stoked by Trump’s recent announcement that he is abandoning his advisors’ proposition for a condensed timetable for denuclearization. This is the prerogative of leaders regardless of the counsel they receive. Practically speaking, this means rather than demanding specific concessions from Pyongyang within the next six months, the administration will allow experimental diplomacy to sputter along for the next two and a half years.

Nonetheless, Trump is seeking transformational change for the Korean Peninsula—he wants to, in the immortal words of John Lennon, “give peace a chance.” The underlying calculation is that reducing America’s security burdens on the peninsula would allow it to focus on strengthening its competitiveness and its ability to contend with other major powers. Perhaps more to the point, with a peace treaty in his back pocket, Trump could campaign in 2020 on the notion that he ended the Korean War, eliminated the North Korea nuclear missile threat, and brought American troops back home.

But given the current state of play, a hastily-contrived peace treaty would ultimately make the United States less competitive—not more—in a region of the world vital to its national interests.

Nearly every major stakeholder in Northeast Asia has a different vision of what a post-nuclear, peacefully-transitioned Korean Peninsula should look like. China, in particular, is angling to push U.S. troops out of its neighborhood while keeping North Korea as a client state. Furthermore, as South Korea’s President Moon Jae-in espouses his New Economic Map of the Korean Peninsula, which proposes to develop South Korea’s physical infrastructure ties with the North, Beijing is sure to use its Belt and Road Initiative to coopt Seoul’s vision for regional connectivity.

Remembrance of the 1953 armistice affords the United States an opportunity to weigh the merits of a peace accord that—without proper consultation and coordination with U.S. allies in the region—could strengthen China’s hand and test the resilience of the American-South Korean alliance.

A better way forward is to pursue a middle ground between the caricature of isolationism that some see Trump as representing and the cold war antagonism that has, for decades, beleaguered the peninsula. The administration would be well-served to commit to a diplomatic framework in which the bedrock of the U.S.-South Korean alliance remains strong but is adjusted over time. This would entail endorsing the framework that both North and South Korea seek for matching significant denuclearization with significant technical development assistance. Broadly, the United States should move carefully and in concert with South Korea to bring North Korea into the ambit of constructive actors rather than adversaries.

The prospect of peace is inviting a proliferation of visions for what an economically-transformed Korean Peninsula might look like. But if there is any chasm between what the United States and its South Korean ally envisions, China is likely to exploit it.

It is critical that the United States, tempting as it may be, does not rush into a peace accord without a clear view of how the U.S.-South Korean alliance can adapt to a new peace regime on the peninsula. Absent this clarity of vision, China’s challenge to U.S. rules-based leadership in Northeast Asia and the Indo-Pacific region writ large will only grow more acute.

Dr. Patrick M. Cronin is Senior Advisor and Senior Director of the Asia-Pacific Security Program at the Center for a New American Security.

Kristine Lee is a Research Associate at the Center for a New American Security.