Dressed to Kill: Arming Ukraine Could Put It on a Path Towards War 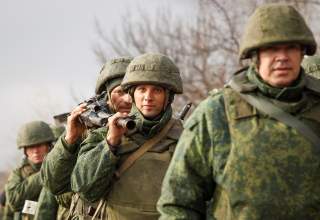 In 2017, the United States began supplying Javelin missile launchers and sniper systems to Ukraine. This equipment, in addition to nonlethal aid (since 2014), is intended to help fight off Russian-backed separatists in the Donbas region.

Yet the aid policy has a number of fundamental shortcomings: its effectiveness at the tactical level is limited; it will likely encourage, not deter, Russia’s engagement in the conflict; and it fails to address the root causes of the Donetsk and Luhansk (collectively—Donbas) rebellions.

For these reasons, weapons aid should cease. Instead, the U.S. policy in Ukraine should focus on facilitating the negotiation process.

Two years on and weapons aid has failed to challenge the status quo in Donbas. The war has held in a stalemate along the four-hundred-kilometer “line of contact,” with intermittent skirmishes but no signs of a breakthrough since aid flows began.

In fact, the aid’s value appears to be largely symbolic. Javelin missile launchers are primarily useful against tanks, which have been deployed only sparingly by the Russian military, and the sniper systems. Reportedly, Barrett .50 BMG rifles, are flashy but too large to be relied upon in maneuver warfare, which is what will be needed to recapture separatist territory.

Policymakers should consider whom they are giving weapons to. Ukraine is a debt-ridden state and only five years beyond an extralegal revolution. Should the government collapse again, then American weapons could end up in the possession of any number of dubious paramilitary groups.

It wouldn’t be the first time. In the 2000s, CIA operatives were forced to repurchase Stinger missiles that had fallen into the hands of Afghani warlords—at a markup. Originally offered to the Mujahideen in the 1980s, the Stingers came to threaten American forces in the region. Similarly, many weapons provided with US authorization to Libyan rebels in 2011 ended up in the possession of jihadists.

Other forms of aid will be far more useful to the Ukrainian military, without risking a long-term security liability. Cyber support can help to neutralize Russia’s drones and electronic warfare efforts, while training in combined-arms (multiple functions used to achieve a single effect) tactics will help to push through defenses. Fortunately, the United States has been providing both since 2014 and should continue to do so.

Why do Russian forces remain in Donbas? Simply put, to prevent NATO’s encroachment. Five NATO members now share borders with Russia (counting the Kaliningrad oblast), and the alliance outspends Russia on defense almost fifteen to one; no matter how forcefully its leaders insist that NATO is defensive in nature, Russians are unlikely to see things that way, and cite the 1999 bombing of Yugoslavia as a counterexample.

Russian president Vladimir Putin has declared Ukraine a “red line” for NATO expansion and interpreted the ousting of Ukraine’s president (who opposed membership) as a coup. Assistant Secretary of State Victoria Nuland’s decision to hand out food to Euromaidan protesters did little to dispel suspicions in Moscow.

To most Russians, weapons aid only justifies concerns about the U.S. and NATO threats in their backyard. Rather than forcing a reevaluation of the Donbas efforts, it will rally Russians around the flag—just as Putin faces his lowest approval ratings since the war began. Only a tiny fraction of the eighty thousand Western District combat troops are committed to Ukraine, but that can change, should anti-western hardliners in the Kremlin demand it.

Proponents of the aid have failed to articulate a plan for when Russia doubles down. Will the United States escalate with a nuclear power along its borders? The country was unwilling to do so in 2008 when Georgia’s bid to join NATO came to a head. It is unclear what has changed in the decade since.

Ignores the Root Causes of the Conflict

Policymakers must avoid confusing the crises in Crimea and Donbas. While the former was orchestrated from start to finish (to preserve Russia’s naval base in Sevastopol), the latter began with a genuine outburst of anger from Ukraine’s ethnic Russian minority. Nicolai N. Petro did an excellent job of outlining the country’s ethnic divisions back in 2014.

Even after Russian military forces withdrawal, deep-seated resentments will linger in Donbas. The lethal aid policy’s greatest flaw is that it completely fails to address these resentments, and in doing so, artificially simplifies the conflict to a proxy war with Russia.

Ukraine’s new president, Volodymyr Zelensky, even seems willing to compromise between the interests of Ukrainian nationalists and the ethnic Russians in Donbas; his plans to allow elections in the separatist territories may jump-start the peace process.

In late October, Ukrainian and Russian forces began a mutual withdrawal from the Luhansk town of Zolote—the first of its kind. Future U.S. policy in Ukraine should focus on facilitating such efforts.

Why can’t the United States push arms and diplomacy all at once? Ukraine agreed in the Minsk II Accords to remove all foreign military equipment from its territory. U.S. weapons aid clearly violates the agreement; and though neither side has adhered to cease-fire terms so far, the odds of future success are exactly zero while weapons aid persists.

The situation in Donbas is exceedingly complex. And though the desire to push back against Russia is understandable, weapons aid is a simplistic solution with little chance of tactical or strategic success. Indeed, it is likely to make the situation worse, and therefore should cease immediately.

Kyle Ropp is a former Army Officer and observer of US-Russian relations.