The Economic Angle in the China Debate 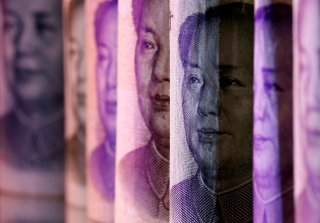 The China challenge has prompted lots of analyses and a flood of articles. All this considerable work focuses on the growing tension between Washington and Beijing. Some of it foresees an escalation in Sino-U.S. tension, the unavoidable result of competition between a rising and established power. Some of these discussions are less inflammatory and argue that the United States can contain the China challenge. Still, others fall in between these sorts of arguments or make the case that China is less ambitious than is commonly believed these days. Just about all these analyses are well-argued and insightful even as they reach different conclusions.

Unfortunately, almost all this work overlooks the unfolding economic pressures facing China. True, all these thinkers recognize the fabulous growth and size of the Chinese economy, but economics is more complex than just size and past growth. The fact is that China, whatever its past success, faces huge economic challenges that cannot help but shape future diplomatic and military decisions and consequently American strategic responses.

The chief cause of these building economic pressures is China’s top-down, centrally directed approach to economic decisionmaking. Beijing, of course, does not do elaborate economic planning the way the Soviet Union did with its Gosplan, but the nation’s leadership nonetheless directs that economy all but completely through their state-owned enterprises. China offers room for entrepreneurial activity, but the political leadership in Beijing still determines the direction of credit and how the nation will deploy the bulk of its economic resources—natural, industrial, and human. Some in the western media are in awe of this power, seeing it as more decisive and better-targeted than uncoordinated, comparatively chaotic market-oriented economies. Some of these news commentators even forecast that China’s system will allow it to triumph in the contest with the United States. But China’s centrally directed approach is less a source of strength than of weakness. That fact is becoming increasingly evident and will eventually constrain Beijing’s freedom of action.

In one respect, that awe is understandable. When Beijing decides to emphasize something, it goes all in and creates an overwhelming display of commitment and output. It is hard not to be dazzled by, for example, rows of shiny high-powered locomotives and miles of high-speed rail. In another respect, however, the enthusiasm is bewildering. After all, history—and not obscure history—offers much evidence of how such approaches fail.

In the 1950s and 1960s, the media appeared to be marveled by how the Soviet Union organized itself to produce steel and heavy equipment. Western journalists could easily agree with the emphasis chosen by Moscow’s planners. Coming, as those times did, on the heels of the Second World War, steel and heavy machinery were the hot products of the day. But the Soviets forecast incorrectly. By the time their economy outpaced the United States in the production of these kinds of things, the world had moved on to plastics and more service-oriented economies. This wrong emphasis chosen by the planners created great waste in an economy that could ill afford it. In the 1980s, Japan, though far from communist, ran its economy from top-down government guidance, and it produced the same awe and fear among a later generation of journalists. Japan’s Ministry of Economy, Trade, and Industry (MITI) directed that economy to seek among other things dominance in straightforward silicon chips, also the hot product of that moment. MITI’s forecast and the effort behind it also produced much wasted time and effort. Just as Japan gained its chip dominance, the world had turned to microprocessors.

Sometimes the central planning works out, but at least as often it fails to see the future and produces great waste, not the least because the centralized nature of the system implicitly dedicates so much of the nation’s economic effort to the wrong goals. Now it is China’s centralized economic direction that produces the awe among a newer set of journalists and news commentators. Like these earlier centrally planned economies, China has emphasized today’s hot products. Premier Li Keqiang’s “Made in China 2025” program seeks dominance in biotech, artificial intelligence, aerospace, and electric vehicles—all prominent in today’s business headlines. China may get lucky, or the world in the latter years of this decade may have moved on to other products.

Market-based systems, of course, are no better at forecasting than governments or news commentators. Business planners are often wrong and there is a great economic waste as a result. The market’s superiority lies not in greater prescience but rather in its natural tendency to diversify effort. Some companies follow today’s headlines, others refuse and stick with the past, while still others, following some seemingly extraneous insight, pursue something entirely different. Those that stay in the past lose. Those that follow today’s headlines can win but only to the extent that those headlines accurately capture the future. Those that go their own way may lose, but if they hit on a future need, they win big, for themselves and for the economy generally. The mix of bets never creates the awesome sight of all the nation’s resources marshaled for one or two or a half dozen objectives, but the system’s natural diversification of effort nonetheless relives the economy of the great waste of an incorrect centralized decision, allows room for more experimentation, and makes it more likely that somewhere in the business mix, someone really will capture the future.

Fans of Beijing’s approach and others who fear it, even if they are aware of this history, point to China’s great success so far as evidence that this time things will be different. Certainly, China has made astounding economic progress over the last half-century. But this record is less evidence that China’s centralized approach will continue to perform as it is a reflection on changing Chinese circumstances. Decades ago, the directions required by underdeveloped China was obvious. Roads, housing, ports, rail links, and the like were primary. And that emphasis produced remarkable rates of development. In China’s more developed economy of today, however, needs for the future are less easily identified. Mistakes about what is necessary become more likely and will become more common the more developed China becomes. Centralized guidance, sometimes stuck in the now inapplicable ruts of the past, has built empty cities and high-speed rail lines to nowhere. Each mistake has created a good deal of waste. Even though the emphasis of “Made in China 2025” has broken with these past patterns, there are still no guarantees that its new targets will dominate half a decade from now, no more than when Japan set out to corner the market on straightforward silicon chips.

More than anything else, China’s debt overhang testifies to the errors that centralized planning has already imposed on that economy. Because every one of these grand and frequently misguided efforts has required investment, it has also created a debt burden that the failed project cannot pay off. And the debt has piled up, offering a rough gauge of the waste thus far. To be sure, Beijing has kept a lid on government debt issuance—much better than Washington has certainly. But government debt alone fails to measure this effect. The financial legacy of failed projects lies with that country’s provincial and local governments and the state-owned enterprises that control the bulk of China’s industry. To see the errors wrought by China’s system and make a valid comparison to the United States, the debt to track is a combination of central government obligations, provincial (or state) and local obligations, and the debt of the corporate sector, state-owned or private.

These calculations are compelling. During the ten years from 2009 to 2019, this combination of debt in China grew 23 percent a year, far in excess of the 8 percent rate growth of the nominal economy. The equivalent debt aggregate for the United States shows how, if diverse economic decisionmakers have made mistakes, they have done so on a much less grand scale. In America, this measure of debt has grown at about 5.6 percent a year over the ten years ended in 2019, faster to be sure than the 4 percent average growth of the nominal economy, but a much narrower gap than in China. Debt accumulations relative to the overall economy offer another perspective. In the United States, the composite of this debt outstanding amounts to just under 180 percent of the country’s gross domestic product (GDP). In China, that figure verges on 220 percent.

More even than the waste and debt problem, China’s increasingly severe demographic problem is also the result of a central planning miscalculation that could never have happened in a less centralized, market-based economy. In the 1970s, when Beijing first began to orchestrate the economy’s development, Premier Deng Xiaoping determined that children would keep too many working hands at home and absorb too much of the nation’s resources. Accordingly, he and his advisors settled on a policy of one-child-per-family. At the time, China had a young population with plenty of people available for work. Over time, however, the persistence of the one-child policy brought down the nation’s fertility rate below replacement. The flow of new entrants into the Chinese workforce slowed to a trickle even as the many who were still young when Deng made his decision have begun to retire. The absolute number of working-age people stagnated. In 2020, UN demographers estimated that absolute numbers in China’s working-age population were no higher than at the turn of the century, while the numbers of dependent retirees had grown to some 17 percent of that population. China, which had nine workers for every retiree in 1978, had slightly less than five, only marginally more than the United States.