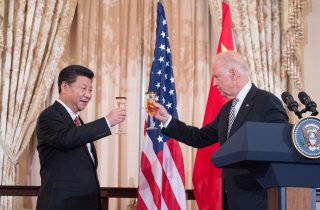 Kurt Campbell, the Biden administration’s coordinator for Indo-Pacific affairs on the National Security Council, recently declared that “The period [in U.S.-China relations] that was broadly described as engagement has come to an end.” This shift away from a “responsible stakeholder” strategy in dealing with Beijing toward a bipartisan consensus in favor of taking a much more confrontational stance toward the People’s Republic of China is now well recognized. Critics in the Trump administration, for example, painted past efforts at engaging with China as naïve and akin to appeasement. But history shows us that a false dichotomy between appeasement and confrontation is neither accurate nor beneficial to U.S. strategic interests. In actuality, “hawks” have often been quite successful in utilizing “talks” with adversaries to advance American interests and global stability.

Indeed, the poster child of anti-appeasement himself—Winston Churchill—made this specific point to the United States early in the Cold War. Shortly after the defeat of French forces at the Battle of Dien Bien Phu in the spring of 1954, the United States faced a difficult strategic decision over how to best advance its interests as communist forces seemed poised to take over all Southeast Asia. Many in the executive branch and in Congress advocated direct American military intervention in the conflict and suggested that negotiating with communist officials in Geneva over the issue would constitute another “Munich,” or naïve appeasement in the face of an insatiable adversary.

A different approach, however, was advocated by one of the most well-respected voices in the international community. Churchill—the prescient hawk who had strongly opposed the appeasement of Adolf Hitler at Munich (and who also happened to be the first to coin the phrase “iron curtain” in describing the threat of the Soviet Union)—advised, instead, taking the route of diplomatic engagement. “To jaw-jaw is always better than to war-war” was the advice the British lion gave members of the U.S. Congress. Specifically, he “warned against impetuous action, declaring that, in the long run, time often solved many problems that appeared difficult at first glance.” The prime minister instead advocated “peaceful coexistence” with the People’s Republic of China after the bloody Korean stalemate, even while acknowledging “that some think this almost heresy.” Of course, a decade later American presidents would ignore Churchill’s advice and—evoking the Munich analogy—commit the United States to what is broadly considered the greatest foreign policy blunder in American history: the Vietnam War.

Churchill is far from the only clear-eyed hawk who nonetheless advocated strongly in favor of engagement with adversaries. It was no less an ardent anti-communist than Richard Nixon who first brought about a policy of détente with the Soviet Union and even greater cooperation with China. The Nixon administration was the first to obtain a stable agreement with the Soviet Union with regards to Berlin, and the primary strategic arms limitation treaty signed by the superpowers was, likewise, a product of Nixon’s realist-based engagement of the Soviet Union.

Nixon’s successor, Gerald Ford, also possessed clear hawkish credentials as a consistent supporter of the war in Vietnam while in Congress, and in appointing advisors such as Donald Rumsfeld and Dick Cheney once in the White House. Yet, as president, Ford committed the United States to the 1975 Helsinki Accords recognizing the post-World War II borders in Eastern Europe (and, thus, Soviet domination thereof) in exchange for a written agreement to respect human rights. Such action was widely perceived as naïve by political competitors at the time—indeed, political criticism became so intense that Ford banned the use of the word “détente” from his 1976 presidential campaign. Yet, in the final analysis, Ford’s lampooned engagement via Helsinki turned out to be a key driver of Eastern European resistance to communist rule over the next fifteen years.

Likewise, Ronald Reagan’s presidency can hardly be questioned in its hawkishness toward the Soviet Union in the 1980s. Reagan came into office determined to compete intensely with the USSR and Reagan himself publicly classified the USSR as an “Evil Empire.” Yet, despite this, Reagan proved quite willing to sit down and talk with the adversary—and even when immediate results could not be achieved. Reagan and Mikhail Gorbachev first met face to face at the Geneva Summit in 1985 and discussed problems such as arms control, the Soviet war in Afghanistan, and human rights, but fierce disagreement over Reagan’s Strategic Defense Initiative led to an impasse over an actual agreement on arms control. The summit itself thus ended in failure and no actual agreement was reached. Yet, the dialogue begun at Geneva led to a continuing conversation with the Soviets on arms control after the meeting. At the Reykjavík Summit the following year, talks once again collapsed without an agreement, but progress allowed for the 1987 Intermediate-Range Nuclear Forces Treaty to be signed at the next summit in Washington. The administration was not Pollyanna about working with the Soviets, but, instead, was able to advance U.S. interests via Reagan’s oft-quoted Russian proverb “trust but verify.” By Reagan’s last year in office, U.S. efforts to engage the USSR had been so successful that at the 1988 Moscow summit, the two leaders were able to declare the Cold War over. History, from Churchill to Reagan, thus gives us strong evidence that clear-eyed hawks have often utilized engagement strategies toward adversaries with great effect.

While the “responsible stakeholder” approach to China has clearly passed, it is as of yet not fully clear what will come to replace it. American foreign policy attitudes toward China took a sharp downward turn during the Trump administration, and there is now a bipartisan consensus in Washington that the United States must take a firmer stance toward the communist power. Yet, taking a more clear-eyed, realistic approach to China—in contrast to a naïve idealist attempt to shape the rising power—does not necessitate abandoning engagement altogether.

For example, the United States and China held an annual Strategic and Economic Dialogue from 2009–2016 during the Obama administration. The Trump administration at first seemed inclined to continue a similar process by conducting a Comprehensive Economic Dialogue in 2017, but high-level dialogues quickly fell apart as the administration sought to take a more confrontational approach with China on economic issues.

Conventional wisdom has seemed to develop that such a structured dialogue process with the Chinese was at best a waste of time, and, at worst, downright counterproductive to U.S. interests. Thus, the cessation of such a dialogue process would seem to be an insignificant—or even positive—development. However, in a newly released report entitled “Engagement Revisited: Progress Made and Lessons Learned from the U.S.-China Strategic and Economic Dialogue” (S&ED) by the National Committee on American Foreign Policy, we find that—in contrast to this conventional wisdom—substantial advancement was actually made in a variety of areas through the dialogue process:

Security Cooperation. The S&ED facilitated cooperation between technical agencies on security issues, including customs and law enforcement related to the illegal trafficking of nuclear and other materials, as well as cracking down on child pornography and cybercrime.

Macroeconomic Stability. The two countries followed through on key commitments to improve their domestic economies in the wake of the Global Financial Crisis, with China increasing domestic consumption from 49-50 percent of GDP by the end of the S&ED, and the United States cutting deficit spending by almost two-thirds in the same period.

Greater Transparency and Rights Protection. The S&ED advanced U.S. goals in intellectual property rights protections, both in collaborative research under the S&ED umbrella and in commitments that the United States Trade Representative (USTR) acknowledged as major progress.

Public Health Management. The United States and China heavily coordinated the response to the Ebola crisis in Africa in 2014, sending medical teams and supplies, and using existing relationships to contain the outbreak. The cooperation continued to grow, with both sides recognizing the global threat of infectious disease, culminating in a joint project to establish the Africa Centres for Disease Control and Prevention that broke ground in January 2017, shortly before the S&ED was shuttered.

Climate Change and Clean Energy. The S&ED significantly contributed to information and experience sharing that resulted in strengthened Chinese environmental regulations, as well as ultimately resolving issues that were holding back accession to the Paris Agreement.

Overall, the data simply does not support the perception of failure many have about U.S.-China dialogues, and the S&ED proves that the two powers can compartmentalize areas of cooperation, competition, and conflict.

While the Trump administration’s approach to China was clearly far more confrontational than that of the Obama administration, there is little evidence that the Biden administration seeks to turn the clock back to 2016. On the contrary, the overwhelming evidence eight months into office suggests far more continuity with the previous administration than difference when it comes to China policy. Top Biden administration China advisors have, for example, argued that “China is done biding its time,” and that China is pursuing a “long game” to displace the United States in world affairs. The Biden administration thus has seemingly made the strategic calculation to embrace a more competitive stance with the People’s Republic of China for the foreseeable future. But a permanent shift away from the “responsible stakeholder” strategy of attempting to shape China should not mean a permanent shift away from high-level dialogue. Hawks and talks are not mutually exclusive, but actually quite effective when coupled together.