Erdogan’s Turkey Is Making a Mockery of Justice 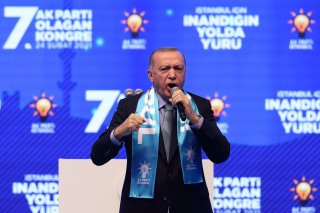 Georges Clemenceau, the World War I French statesman and military leader, is credited with the saying, “Military justice is what military music is to music,” although this attribution has been challenged. Nevertheless, coming after the Dreyfus Affair, it reflected a certain disgust with military justice.

Much has happened since. In many countries today, the justice system has been deliberately weaponized by governments to harass, imprison, and otherwise marginalize real and imaginary opponents, as well as anyone who does not conform to the ruling group’s worldview. The justice system is deployed arbitrarily, unpredictably, and cruelly to intimidate populations. It is also used to shield supporters from the law. What is a crime is in the eye of the beholder, and it is only one eye that matters—the regime’s.

We are not surprised if this happens in Burma, currently run by a brutal military regime, or autocratic China. It is, however, becoming increasingly apparent in countries where populist leaders are ascendant and where they have successfully managed to assume control of otherwise independent institutions.

One of the more egregious examples is today’s Turkey. This past week, Gülşen, a singer and songwriter known for her support of feminist positions, risqué stage outfits, and defense of LGBT rights, was arrested, remanded into custody, and then, after three days, placed under house arrest pending trial for her repartee on stage with a band member. The event itself had taken place earlier this year in April when she joked that "he studied at an Imam Hatip (religious school) previously. That's where his perversion comes from." Ignored then, her comments were suddenly revived in a public campaign by the pro-government conservative press and members of the ruling Justice and Development Party (AKP) to punish her.

As many critics of her detention pointed out, men who abuse or even kill their spouses get better treatment at the hands of Turkish justice, as they often are not incarcerated.

A twenty-something prosecutor who only graduated from law school in 2018 and was put on a fast track to his current coveted position in Istanbul obliged the online mob in jailing her. His previous claim to fame had been imprisoning a well-known journalist, Sedef Kabas, who had employed a proverb on air that was meant as a criticism of President Recep Tayyip Erdogan, for forty-nine days. Earlier this year, Canan Kaftancioglu, one of the up-and-coming members of the opposition and leader of the main opposition party’s Istanbul organization, was sentenced to almost five years and banned from politics for, among other crimes, “insulting the president.” Her trial had been initiated in 2019—after the AKP had suffered a humiliating loss in the Istanbul municipal elections—for tweets she had sent some seven years earlier.

Turkish prisons are full of people who are there simply because they are opponents; they tend to be Kurdish politicians, writers, and civil society leaders, as well as journalists of all stripes. Every day, the press reports arrests of people charged under the terrorism statutes even if their only “crime” is to have written or joined organizations critical of government policy on what are considered sensitive issues.

Often, there is no rhyme or reason for government actions. This summer alone, some seventeen regional concerts were banned by the authorities. University professors in public institutions have been dismissed, some because they affixed their signature to a petition the government disliked or, as the current kerfuffle at Bogazici University, arguably one of the top two educational institutions in the country, demonstrates, the government is purging a university of faculty members it thinks are not loyal.

The most egregious cases of wrongful imprisonment are those of Selahattin Demirtas, the head of the third largest political party in the country, the pro-Kurdish People’s Democracy Party, and Osman Kavala, a civil society leader. Demirtas is imprisoned due to a vendetta by Erdogan, who took umbrage at Demirtas’ opposition to him becoming president. Kavala has been in jail simply because Erdogan needs to point the finger at someone for the 2013 Gezi uprising, the one time there were massive nationwide demonstrations against the government. Kavala’s case is one of those that would genuinely shock any legal expert, judge, or lawyer in any rule of law country. I should know because I, too, was charged with him at one point for organizing the failed July 2016 coup. The indictment was constructed on nothing but manufactured “facts” and innuendos, including, of course, that he is George Soros’ agent in Turkey. Erdogan himself interfered directly during the trial and appeals process by publicly attacking Kavala’s Soros connections and loudly affirming his guilt. The die was cast; Kavala was sentenced to life imprisonment.

Turkey is not Burma; it is a leading member of NATO, the West’s most important alliance, and one endowed with geopolitically essential real estate. Therefore, Ankara can easily ignore, for instance, adverse European Court of Human Rights rulings on Kavala. Never mind that the Turkish Constitution states that Turkey is obligated to abide by that body’s decisions. The Supreme Council of Judges and Prosecutors (HSYK) had the temerity this week to warn critics of Gülsen’s imprisonment by reminding everyone that Turkish justice is “independent.”

The current travails of the Turkish justice system are a warning to all, even democratic countries, that the rule of law can easily be undermined by populist leaders who successfully politicize everything.

Henri J. Barkey is the Cohen Professor of International Relations at Lehigh University and an adjunct senior fellow for Middle East studies at the Council of Foreign Relations.