The Far Left Will Regret Siccing the FBI on Trump 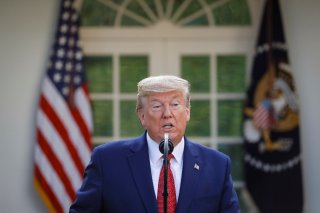 Whatever excuse the Justice Department and FBI have for raiding the home of former President Donald Trump, there can be no doubt about the ultimate implication. The Far Left, which sprung to life in opposition to the Trump administration, is determined to use the power of government to remove those who challenge its power.

Were the FBI agents looking for mishandled classified documents taken from the White House? That would be a laugh. As president, Trump could have declassified anything he wanted and needn’t have told anyone since he was the chief executive of the executive branch and commander in chief of the military and, by extension, the national security establishment that can classify information. It is literally impossible for a president to mishandle classified information since the ability to classify it and manage its handling is vested in him. The Justice Department and FBI should know that unless they were sick the day they taught law at law school.

There’s also the small matter that Trump’s 2016 opponent, Hillary Clinton, had a server installed in her home to conceal her governmental communications, which an investigation later determined contained classified information. She didn’t have Trump’s plenary declassification authority and still wasn’t even prosecuted. Neither has so much of a legal glove been applied to Hillary’s husband, former President Bill Clinton, who helped her set up the Clinton Global Initiative—the biggest mechanism for accepting foreign bribes in world history.

Also escaping prosecution is President Joe Biden’s son, Hunter, who seems to have raised funds in Ukraine and China for no-show work with an appropriate amount set aside for the “big guy.” Why are these Democrats handled with kid gloves while Trump is persecuted for imaginary crimes? The reason is that this is about politics, not justice.

Trump’s innocence of what he has been accused of has never impeded the rampaging Left from continuing to target him. That much was certain after the Mueller investigation confirmed that the claim that Trump and his campaign colluded with Russia was false. It was also reinforced by two phony impeachments of Trump for imaginary crimes and the laughably imprecise and partisan January 6 committee being run by Nancy Pelosi’s House of Representatives.

Trump is likely to claim that while he is being targeted, the government is really after those who supported him or anyone who questions the national security and law-enforcement deep state that the Left now controls. He merely stands in their way.

This will be a powerful message that might have the added benefit of being true. Going back to President Barack Obama’s use of the IRS to target Tea Party groups and, most recently, the absurd sedition charges being applied to fools who rioted at the Capitol, it looks like the national security leviathan is being turned against the ruling regime’s opponents. The raid on Trump’s home will be a turning point for many. He cannot be dismissed as a hick protesting in the Capitol or a Tea Partier trying to set up a non-profit to expound on limited government. He was the president of the United States and remains the head of a broadly popular political movement.

The immediate political reaction is that Republicans and anyone partial to Trump will be more energized to vote in midterm elections this November than in any election since the Civil War. That energy is what wins midterm elections. The impetus is likely to eclipse even the 1930 surge for Democrats at the onset of the Great Depression. When combined with discontent about the economy, this foretells a wave election.

Why would Democrats make such a dumb tactical mistake? Was it self-indulgent stupidity? An attorney general and FBI director who are deranged and care nothing about the reputations of the institutions they lead? Or was it more calculating and sinister: a move to ensure Trump is the Republican nominee in 2024 instead of Florida Gov. Ron DeSantis in the hope that Trump would run such a bitter and self-referential campaign that the Democrats might just somehow hold power?

Whatever the motive and plan, voters must now decide whether they are comfortable with the Left being in charge of the leviathan that the national security establishment has become, or whether it is time to reduce the power of that leviathan and attempt to depoliticize it. After today, that means removing the FBI from investigating any alleged political corruption or possibly doing away with the agency. The other components of the failure factory, such as a military that cannot win wars and an intelligence bureaucracy that gets most things wrong but excels in domestic political warfare, should similarly be cut significantly or eliminated.

There has been much talk lately about attacks on democracy and attempts to undermine the expressed wishes of voters. After today, a much larger part of the country now energetically supports that contention.