Final Frontier: Why the Space Force Is Here to Stay 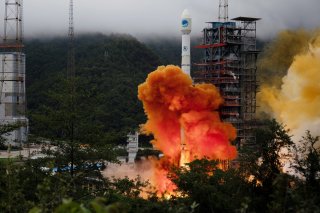 This week, White House Press Secretary Jen Psaki stated definitively that the Space Force “absolutely has the full support of the Biden administration.” It’s a wise move. Psaki also tweeted an invitation to the members of the Space Force team to “visit us in the briefing room anytime to share an update on their important work.” What might Space Force officials have to say?

President Joe Biden outlined his key priorities in an article in Foreign Affairs, where he pledged to make the “investments necessary to equip our troops for the challenges of this century, not the last one.” The Space Force is an indispensable part of that forward-looking vision; it represents a key instrument of American technological leadership and diplomacy. Even though the new service is still in its infancy, the U.S. Space Force is already delivering on the new administration’s top priorities: the economy, inclusion, climate change, and global leadership.

The Space Force’s contributions are perhaps most immediately felt with regard to the current global pandemic. As the U.S. military begins the rapid deployment of coronavirus vaccines to save lives, it is the Space Force that is providing the secure communication backbone for the effort. Across the spectrum of governmental responses to the coronavirus, it has been Space Force capabilities that have supported this whole-of-government approach. Its contributions are essential, but often invisible. They range from providing additional emergency bandwidth to support the U.S. Navy’s one-thousand-bed hospital ship Mercy to enabling cutting-edge efforts at contact tracing via the Space Force’s GPS system.

These contributions, however, are just the tip of the iceberg, because the Space Force is an engine of the industries of the future. Today, the service’s contributions are already ubiquitous. Its GPS constellation enables precision agriculture for the food we eat, navigation for the aircraft we fly, location services on our phones and cars, and timing for our banks and ATMs. In fact, it is estimated that Space Force-administered GPS services add as much as $1 billion per day in economic benefits to our economy.

Very likely, the Space Force is the only military service that delivers an unambiguously positive return on investment. And it does so at low cost; the Space Force budget, which is less than one-tenth of that of the Air Force, and not even two percent of the entire Defense Department budget, pays for its entire yearly allocation in just sixteen days of GPS operation. Moreover, while the Space Force is small, with just a few thousand members, its budget supports close to 180,000 jobs. It also invests approximately $10.3 billion of the nation’s research and development (R&D) in the space industry, from industry giants like SpaceX, ULA, and Blue Origin to tiny start-ups with big dreams—R&D investments that in the past have given America its first glimpse of planet Earth, climate-monitoring satellites, hurricane warning, precision farming, and broadband for underserved rural communities.

America’s Space Force is also playing the long game. It has proposed a comprehensive “get-well” plan for the space industry to cope with the coronavirus and remain globally competitive—one that hinges on leveraging the full diversity of America. The Space Force has already secured science, technology, engineering, and mathematics partnerships, recruiting partnerships, and scholarships with Historically Black Colleges and Universities. Women already make up 22 percent of officers in the Space Force, and 21 percent of its enlisted personnel. Small and lean, with the least cultural resistance, it is the easiest of the services to mold and change, with potentially the largest symbolic impact. Placed under the direct supervision of Vice President Kamala Harris in her role as head of the National Space Council, it will be a showcase of both diversity and progress.

The Space Force is on the front lines of combatting climate change as well. Its weather satellites provide crucial data on the world’s climate. While few may realize it, it is actually the Space Force that operates the number one Green technology, GPS, which annually reduces total carbon emissions from all forms of transportation between 15–21 percent. But Space Force is doing still more; its investments in disruptive technology are maintaining parity with China’s ambitious goals for space-based solar power, a renewable energy technology that could scale to all global demand and help us lead the world to achieve net-zero emissions. Indeed, Space Force projects like the X-37 PRAM-FX and Space Solar Power Incremental Demonstration Program (SSPIDR) are incubating technologies that could lead to an energy system beyond fossil or nuclear—one that is controlled not by autocracies but by a web of friendly democracies willing to collaborate through science diplomacy to enable global energy and climate security.

And as the Biden administration seeks to rebuild American leadership abroad and strengthen America’s relationships with allies, the Space Force will serve as a critical enabler. Whether the challenge is Russian or Iranian aggression, Iranian or North Korean proliferation, it is the Space Force that holds the keys to verification, to warning, and to command of America’s forces at a great distance. The service is also leading diplomatic efforts to draw together our alliance democracies. It already operates a Combined Space Operations Center with America’s closest allies. Additionally, the nascent service is developing international partnerships and relationships with annual exercises that include Australia, Canada, France, Germany, Japan, New Zealand, and the United Kingdom.

There is much that the new administration can do to put its own stamp on America’s Space Force. But the Biden White House should approach America’s newest military service with a clear understanding of its potential to serve as a force for global good, and for extending American leadership in the very areas—from climate change to global re-engagement to diversity—that it values the most.