Lost In Space: Why America Needs a New Defense Strategy 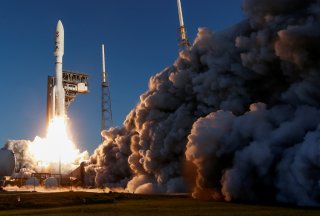 Although the U.S. government’s Defense Space Strategy (DSS), its most important military guidance for space, was released barely a month ago, it already requires a fundamental rewrite. That’s because the Pentagon’s current plan has been superseded by higher-level guidance that establishes an entirely different national context for how America will compete—and persevere—in the space frontier.

That so recent a document has already been overtaken by events showcases just how dynamic the great-power competition for space has become, and how rapidly U.S. policy in this domain is evolving. Unless the DSS is rewritten to capture the new strategic realities of space, obsolete thinking will constrain the U.S. military’s newest branch, the Space Force, and America’s spacefaring future along with it.

The recent level of high-level policy activity surrounding space has been truly breathtaking. Just since April, the White House issued an executive order on space resources, approved NASA’s Artemis Accords (a set of spacefaring principles) and released what is essentially a whole-of-nation space strategy, entitled A New Era in Space Exploration and Development. But these same initiatives mark a fundamental change in U.S. policy—one that the DSS needs to be re-written to reflect.

Very significantly, the new national strategy lays out a campaign to expand from Earth orbit to utilize the Moon and cis-lunar space to develop a commercial space economy, with an expanding sphere of commercial and non-governmental activities, and a strong emphasis on resource utilization (also known as space mining). Moreover, the national strategy is explicit regarding the role of the Space Force, stating that—in order to execute this vision—the United States requires a secure space environment conducive to U.S. commercial growth. This gives the Space Force broad latitude to ensure unfettered access to and use of space by the United States and its allies and partners, as well as to pursue activities such as space transportation and logistics, power, communication, navigation, and space domain awareness.

Military spacepower strategists such as Brent Ziarnick, Joshua Carlson and Everett Dolman have long been vocal advocates for such a role for America’s newest military branch. They have persevered, and developing dual-use space infrastructure is now a specified duty for the Space Force. Of even greater significance, providing for security for space commerce is now a White House-directed mission co-equal to terrestrial warfighting.

Therein lies the rub. Since these policy changes occurred after the release of the DSS, they are not reflected in it. The DSS thus considers spacepower in a military context, and not that of a broader national deep-space strategy. This is the case even though the Defense Department’s thinking has clearly evolved in recent weeks. This summer, a joint report issued by Space Force, the Defense Innovation Unit, and the Air Force Research Lab outlined that that “an expanded cislunar economy will require security and a stabilizing military presence,” and explicitly called for an expanded role for the Space Force. Consistent with the White House thinking on developing dual-use technologies in the deep space strategy, the report suggests that the Space Force “should articulate its role in planetary defense,” because such a role “could accelerate America’s edge in asteroid mining and in-space transportation.” The report also laid out six focus areas and forty recommendations it deemed necessary to secure American leadership in the space domain. A revised DSS must address and incorporate these insights.

It’s a fairly common occurrence for lower-level documents to be superseded by new policy decisions, requiring framing and language to be rewritten. But it doesn’t often happen to documents of such importance. The DSS is a critical directive that will shape Space Force design and culture. As such, it simply cannot afford to be out of date.

Peter Garretson is a senior fellow for Defense Studies at the American Foreign Policy Council in Washington, DC.