Furor Over Europe’s Investment Agreement with China is Overblown 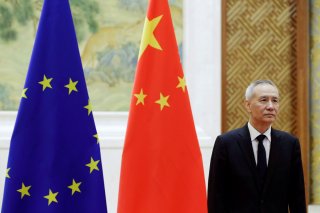 Despite strict lockdowns and another Brexit deadline, the European Commission won’t let 2020 go without another notch in its belt—progress in its seven-year trek towards an investment agreement with China. Many have been quick to balk, calling it tone-deaf, a gift to Beijing, a gut punch to the incoming U.S. administration. But let’s not end this year queasy with alarmism. Squeezed in the narrow straights between the end of the powerful German presidency of the European Council and Joe Biden’s inauguration, the European Union and Germany are trying to level the playing field with the United States vis-à-vis China, not hand Beijing the keys to the castle.

EU negotiators, in an ephemeral Teutonic fortress, are eager to replicate several aspects of U.S. bilateral negotiations with China. Phase 1 of the agreement, which was signed in January of this year, relieved tariff pressure on Beijing in exchange for the import of U.S. agricultural and industrial products. Phase 2, had Washington’s mood not turned overwhelmingly punitive midway through 2020, would have focused on forced technology transfers and state subsidies. The EU wants to secure market access for investors and protection against intellectual property theft through joint ventures, and better terms for foreign firms operating in China, where the government hands out plush contracts to its chosen industry. It all sounds familiar.

When U.S. negotiations began, many EU politicians bristled at how the Trump administration used the throw-weight of its economy to negotiate with Beijing unilaterally—this was what the EU had been trying to do for years. The ham-handed rhetoric and aggressive tactics, such as unilateral tariffs, offset by the president’s warm feelings for Xi Jinping somehow got an agreement on the table—it wasn’t “fair” and didn’t speak in favor of multilateral negotiation or reforming the World Trade Organization. In response to European criticism, a useful talking point at the time (one that I used as an NSC staffer) was if the United States manages to get concessions, it actually helps European negotiators pile on and claim them too. But our counterparts may have been too quick to envy us. The economic distortions of Covid-19 have played a role, but the backbone of the deal, the purchase agreements, have fallen flat. China has fulfilled less than half of its promise, and Washington can’t address the breach easily.

In the throes of last-minute drafting, it is unclear whether EU partners will learn from American mistakes or China’s last-minute concessions will hold once the ink is dry, but it does open the door for a bit of a longer game. The EU and its member states will almost certainly need to act against pure commercial interest in the coming years to hold China accountable for human rights violations, military provocations, and industrial espionage. As a clear sign of this trajectory, Brussels is sharpening its regulatory toolbox through the passage of the EU Magnitsky sanctions authority, increasing scrutiny of incoming investments, and in competition policy, which will set standards for European market participants. So, in this context, let’s suppose that having a failed agreement on the books is also a negotiating tactic. Berlin has a record of setting a benchmark and then pointing to agreement not upheld when responding to an inconvenient truth, particularly an economic one. This allows for a less politicized response to Chinese infractions, provides insurance against asymmetric retaliation, and eschews the endless cycle of counteraccusations over who was the first offender. European governments can turn to their industry and say: look, we tried.

Let’s also question whether the EU’s decision to push for an agreement is a poor signal for transatlantic cooperation. The incoming Biden team has recognized the need for a multipronged strategy that manages interdependencies and simultaneously pushes back in a consistent application of economic statecraft tools but will need time to pick up the strands of fragmented, disjointed, and often contradictory policy its predecessors left them. For example, last week, Commerce added 60 companies, including China’s major semiconductor firm SMIC, to the entities list, which will likely blowback on U.S. industry. There are massive outstanding questions about how policies to delist Chinese participants from the New York Stock Exchange will be implemented by the Securities and Exchange Commission and other regulators. Untangling this web and determining what to “keep” and what to discard will take time, especially with the strong bipartisan anti-China mood in Washington. This is a strategic gap the EU won’t want to wait out. Better yet, the gap is a time for pro-active European influence. For the first year of the new term, the EU may be a more consequential standard-setter. U.S. negotiators and regulators must sensitize themselves to European timetables and admit they will be shaped and influenced by them.

Before work begins on the forward-leaning proposals for cooperation that Brussels has brought to Washington and before the flurry of diplomatic engagement launches forward in the spirit of optimism and renewal, it may be worth playing European cards for a last-minute Phase 1 and go from there.