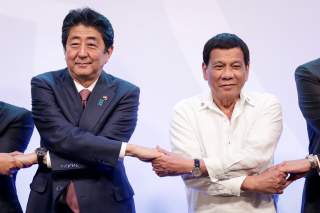 “Japan is a friend closer than a brother. That means Japan is a friend unlike any other,” Philippine president Rodrigo Duterte once described his relationship with Asia’s other juggernaut. “Ours is a special friendship whose value is beyond any measure,” he added. The controversial Filipino leader echoed the same sentiment during his latest visit to Tokyo, the third in less than three years, where he emphasized Japan comes second to none in his estimate.

As far as foreign policy is concerned, Duterte is often seen though the prism of his anti-Western tirades, unprecedented cussing against American leaders, age-old anti-colonial rhetoric, and, above all, his supposed pivot to China, which has sent shockwaves across the world. After all, this is the same president that declared his “separation” from the Washington and “love” for Beijing. What’s often missing in this binary discourse, however, is the third pole in Duterte’s foreign policy calculus, namely Japan.

Though Tokyo is rarely seen as a great power, it’s still the world’s third largest economy with one of the most sophisticated naval forces on earth, arguably the best in Asia. And under Prime Minister Shinzo Abe, the country is proactively carving out a more central strategic role in East Asia and beyond. As I have argued earlier, Abe is the ultimate architect of the “Indo-Pacific” strategic paradigm, which has now become the dominant reference point for much of the region, most especially the Trump administration and India.

Two powerful forces drive the depth of the Philippine-Japan bilateral relationship, which is entering a new golden age: one personal, the other structural. A long history of positive relations, shared concerns over the rise of China and American unpredictability, and booming economic relations undergird this burgeoning partnership, one of the most promising in the Indo-Pacific.

On the personal level, Duterte’s penchant for Japan is three-fold. First, it’s based on a long history of cordial and fruitful relations during his long years as mayor of Davao City, which hosts a Japanese consulate and large Japanese business community.

For the past century, the Japanese government and investors have been at the forefront of aiding the economic boom and infrastructure development in Duterte’s hometown, which is the commercial hub of the southern Philippines and among the fastest growing cities in the country. A highly instinctive leader, who values personal experience beyond anything else, Duterte often fondly remembers his decades of productive relations with the Japanese consulate and investors in Davao, where he often hosts Japanese dignitaries these days.

In the same breath, his positive relationship with China is also based on his collaborative interaction with the Davao Chinese business community. And it’s precisely negative experiences with the United States, particularly the “Meiring incident” and the Bush-era counterterror operations in Mindanao, which also explains Duterte’s congenial antipathy towards the United States.

The second reason why Duterte likes Japan is its supposed “Asian-ness,” namely Tokyo’s unwillingness to evangelize liberal democratic values and criticize his human rights record amid a scorched earth drug war, which has claimed the lives of thousands of suspected drug dealers. In fact, Japan has offered assistance to Duterte in this regard, particularly in terms of rehabilitation of drug dependents.

The third reason is his bonhomie with Abe, who became the first foreign leader to visit the Philippines under Duterte. The Japanese leader even went so far as visiting Duterte’s home in Davao along with his wife, portraying bilateral bonds as almost familial. Crucially, as a senior Japanese diplomat told me back in 2017, Abe also played a successful intermediary role between Duterte and the U.S. president Donald Trump, both of which have had warm relations with the Japanese leader. Abe encouraged both leaders to avoid tensions over human rights issues, which bedeviled Philippine-U.S. relations under the Obama administration, and instead focus on issues of common concern.

The blossoming Philippine-Japan relationship is also grounded in more structural realities. On one hand, its reflection of Japan’s central role in Philippine economic development. Over the past decades, Japan has been a top investor, a leading export destination, and the number one source of Overseas Development Assistance to the Philippines.

Much of the Philippines’ modern public infrastructure, particularly in the industrialized national capital region, has been built and/or funded by Japan. In fact, Japan is also the leading partner of Duterte’s “build, build, build” infrastructure buildup, bagging the multi-billion-dollar subway metro project in Manila as well as the North-South Commuter Railway project, connecting industrialized regions in the north. And unlike China’s, Japan’s infrastructure investments tend to be of higher quality, employ more locals, and are funded with radically lower interest rates.

During his latest visit to Japan, accompanied by as many as two hundred senior officials, Duterte bagged $6 billion in investments from major Japanese companies, including Mitsubishi cars and Sumitomo Electric Industries Ltd. Even though Japan pledged only half that of China ($12 billion), its investments are expected to generate four times more jobs (eighty-two thousand vs. twenty-one thousand).

With the rise of the Philippines as among the world’s leading emerging markets, Japan is increasingly interested in the Southeast Asian countries’ large and educated workforce as well as expanding consumer markets. Notwithstanding imperial Japan’s aggression against the Philippines, majority of Filipinos have high levels of trust in the Asian country, which they see as an important contributor to national development and regional peace.

It’s the aggressive rise of China, and the fear that it’s instilling across the region, that is driving Japan and the Philippines closer together. As Duterte himself lamented during his keynote speech at the Nikkei International Conference on the  Future of Asia forum in Tokyo, “is it right for a country [China] to claim the whole ocean [South China Sea and Western Pacific]?"

The Abe administration has transformed Japan into an increasingly pivotal security partner to the Philippines, providing multirole vessels and TC-90 reconnaissance aircraft to Philippine marine forces in recent years. Last year, Japan also deployed, for the first time since the end of World War II, an armored vehicle unit to the Philippine-U.S. annual Balikatan exercises (this year called the Kamandag) in the South China Sea.

As the Philippine Defense Secretary Delfin Lorenzana told me recently, Japan is “trying to sell us their latest radar systems. We are looking at five systems to be procured from them.” Were Abe to successfully alter or amend Japan’s pacifist constitution, bilateral relations could enter an entirely new era, with the possibility of a bilateral defense deal on the horizon. Thanks to China, America’s two treaty allies have huddled closer to each other than ever in living memory. A golden era of Philippine-Japan relations has arrived.