The Great U.S.-China Divorce Has Arrived 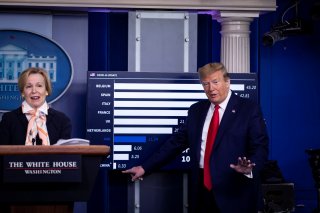 Make no mistake: The global struggle with China is about to go to the next level. Or two. Or three.

By triggering a global disease outbreak, the Chinese Communist Party’s reprehensible behavior crossed the last line, leaving other nations no recourse but to push back. Hard.

No longer can responsible nations tolerate the regime’s destabilizing interference around the world. Post-COVID-19, there will be a new world map, and this is what it is going to look like.

Let’s start with what the map doesn’t look like. There won’t be big bold circles, blue and red, demarking spheres of influence and control. This isn’t like most other great power competitions, from “Inter Caetera” to the Cold War. For one, the U.S. is a global power with global interests and responsibilities. Washington isn’t going to cede any part of the world to Beijing. Conversely, China’s reach is worldwide. No one is going to stop doing business with China, least of all the United States.

China doesn’t have a hammerlock on any part of the world other than North Korea and a handful of Southeast Asian countries. And Beijing may find it can’t keep those countries under its thumb forever. Disputes over the Mekong River in Southeast Asia, for example, may open wedges for countries seeking a more independent line from Beijing. If the U.S. and North Korea ever reach a nuclear deal, that could break Beijing’s monopoly as well.

China, of course, has fast friends elsewhere. But partnerships with Russia, Iran, Venezuela, Cuba and the like are of marginal benefit at best. All of these countries are embroiled in competitions of their own, which have left them politically and economically isolated from various parts of the world. Other than comradeship, diplomatic support and a modicum of trade, they have little to offer each other. Mostly these are partnerships of convenience, not real strategic alliances. In particular, the oft-discussed threat of Beijing and Moscow teaming up is way overblown.

Nor does it appear there will be an appreciable post-Cold War version of the “non-aligned movement.” Indeed, all the traditional leaders of this cause, particularly India, seem busy trying to align themselves in one way or another.

The vast majority of the world is, and will remain for the foreseeable future, divided into three camps: (1) the free world, resilient against Chinese meddling; (2) the balancers, nations that recognize the key to their prosperity and security is engaging with both the United States and China, protecting their independence and minimizing the likelihood that they will become theaters of competition between great powers, and (3) contested space, where the U.S., China, and others compete for influence across the spectrum of economic, political, security, and information spheres.

This is a term that is going to make a big comeback. There is a defining difference between the United States and the Chinese Communist Party. America believes in economic freedom, human rights and popular sovereignty. The Chinese Communist Party does not. Countries that want to preserve the place of free peoples will have to pick a side—and they likely will.

U.S.-Canada-Mexico. The hemispheric triad is the base of American power. The prosperity, economies, infrastructure, security and, as we have now seen, public health of these three countries are intertwined. Don’t count on China making any major inroads here. The newly implemented US-Canada-Mexico Free Trade Agreement further cemented the three economies together. While Trump’s relationships with Trudeau and AMLO is often depicted as dysfunctional, in practice, cooperation has never been better. In particular, the U.S. and Mexico have implemented unprecedented cooperation on immigration and border security. The U.S. will likely provide significant assistance to Mexico in battling the COVID-19 outbreak. It will do little good to get American factories up and running if parts manufacturers for these companies in Mexico are shut down battling the coronavirus. In addition, as more U.S. companies look to move manufacturing partnerships out of China, more of that business is likely to go to Mexico.

Transatlantic Community. No strategic partnership is more important to the free world than the transatlantic community. The U.S. isn’t going to give up on this partnership. Neither should Europe. If Europeans want to keep their freedoms, they can’t be neutral observers in the competition between the U.S. and China. Even Switzerland can’t be Switzerland anymore. Post-COVID, expect renewed investments in the transatlantic community, not just to restart our joint economic engine, but to marginalize the malicious influences of China.

The Middle East. China will never supplant U.S. influence and importance in this region. If anything, right now Washington has an opportunity to expand its influence and establish a sustainable footprint for contributing to peace, stability and prosperity in the Greater Middle East post-COVID-19.  They key to that is putting a security, political, and economic architecture in place.

The Indo-Pacific. One of the positive developments of the COVID-19 outbreak is that it has facilitated cooperation among the “the quad-plus” group in fashioning a response. The United States along with India, Japan, South Korea, Australia, New Zealand, Vietnam and Taiwan offer a formidable diplomatic framework for bringing peace and prosperity to this part of the world in the face of China’s bullying influence.

There will be many countries, including some respectable democracies that for one reason or another won’t or can’t stand up to Beijing. The key to their independence, security and prosperity won’t be to limit China’s presence but to engage with the U.S. and others to balance Chinese influence. This is a path that will be followed by places like Singapore, Sri Lanka, Nepal, Bhutan, Bangladesh, Thailand, Djibouti, Pakistan, Serbia and others.

China might not like to see the presence of other powers in these places, but these relationships should be perfectly acceptable to the United States.  The U.S. doesn’t need every country to pick sides. What we should and do want is for these countries to insist that—for their own interests, as well as ours—external powers play fair. That is why, for example, the U.S., Japan and others promote the Blue Dot network, which promotes quality, transparent, and economically viable international infrastructure projects.

If anything, expect the ranks of these countries to expand. Mongolia and several Central Asian countries are looking to move in that direction.

The Arctic and Antarctic regions are both areas where China would like to have a lot more sway. That is not going to happen either. From economic and environmental perspectives, these regions must remain areas of open cooperation, not competition. The peoples of the region and the planet will only benefit if these areas remain places of mutual cooperation. The U.S. will have to be part of a joint effort to curb China’s unreasonable Arctic ambitions. Likewise, Washington will have to play a leadership role in protecting the Antarctic.

The U.S. and China are going to duke it out for influence in vast swaths of the world—Latin America, Africa, the Pacific Islands—as well as in international organizations.

America has a home-field advantage in the Western Hemisphere. The Trump administration has done a far better job in partnering with Latin American and Caribbean nations than many expected. Still, there is much to be done.

The U.S. was slow to wake up to what China was up to in Africa and the Pacific Islands, and Washington is still in catch-up mode. The great challenge for the U.S. is not lack of will but, often, the lack responsible partners to work with. In many cases, poor governance, inadequate transparency, insufficient accountability and a lack of economic freedom are hindrances to forming effective partnerships.

One of the most active new battlegrounds for U.S. and Chinese influence will be international organizations.  China has been aggressively trying to expand its influence over the key organizations that regulate global norms. The U.S. is fighting uphill on this one, too.

Sketching Out the Future

There are those who want to ignore the competition with China. Others wish to cut ties completely and then divide the world up into ours and theirs. Both will be sadly disappointed by the world’s new map.

The map lays out many challenges for the U.S., but also reveals both our significant advantages and opportunities. Post-COVID-19, Washington needs to pay a lot more attention to the demands that the new map maps out. After we get our economy up and running, dealing with China will no doubt be job one.