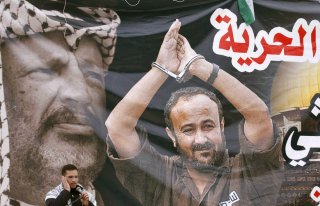 The Hamas-Fatah feud has dominated Palestinian politics since Hamas violently expelled Fatah from Gaza in 2007. In November 2021, Hamas conducted a provocative funeral procession in the West Bank, which the Fatah-dominated PA controls, for a fallen Hamas member. The public demonstration teemed with Hamas flags and gunmen, challenging Fatah primacy in that territory. In response, PA police cracked down on Hamas members, arresting several and preventing similar outbreaks. And on December 12, at a funeral for a Hamas member in a Palestinian refugee camp in Lebanon, a Hamas-Fatah clash left four dead.

Barghouti is a national icon. He has been active within Fatah since the early 1970s and rose to prominence as a field leader during the late 1980s in the First Intifada. Barghouti led the Tanzim, Fatah’s armed wing, when the Palestinians launched the Second Intifada in 2000. During this period, Barghouti arguably became more popular than former Hamas leader Sheikh Ahmad Yassin and former Palestinian President Yasser Arafat.

Israel arrested Barghouti in 2002 for orchestrating terrorist attacks and held him directly responsible for the deaths of at least fourteen Israelis. Jerusalem subsequently sentenced Barghouti to five consecutive life terms plus forty years. Yet Barghouti’s appeal and influence have only increased during his incarceration.

Seeking to capitalize on Barghouti’s popularity, current Hamas leader Ismail Haniyeh has prioritized his release. Since the Hamas-Israel war in May 2021, Egypt has attempted to secure a long-term truce that would include a prisoner exchange. In late June, Haniyeh promised Fadwa Barghouti that her husband would be included in any future prisoner swap with Israel.

Hamas’ demands may seem unrealistic in light of Barghouti’s exclusion from previous prisoner exchanges and his prison sentences. Yet the 2011 prisoner exchange for Gilad Shalit that freed 1,027 Palestinians, which included many with blood on their hands, seemed far-fetched at the time.

However, Palestinian polls have Barghouti beating Haniyeh, calling into question Haniyeh’s judgment in campaigning for the release of a possible rival. Hamas is taking this risk for several reasons. First, Hamas would get credit as the main Palestinian leadership even if Barghouti is not released. Second, Barghouti could be a potential ally to Hamas given its shared vision of annihilating Israel. And third, Barghouti’s isolation in Israeli prison and lack of a political infrastructure to help actualize his political goals minimize the threat he poses to Hamas.

Barghouti could also be a major headache for Palestinian President Mahmoud Abbas, and would likely defeat Abbas in an election, according to Palestinian polls. Fearing competition, Abbas and his loyalists have reportedly pressured Israeli and Egyptian negotiators not to release Barghouti. Adding to Barghouti’s isolation, in March 2021, Abbas expelled Barghouti’s most notable supporter, Nasser al-Kidwa, from Fatah when al-Kidwa announced he would run on his own slate during the Palestinian elections that were scheduled to take place in May.

Abbas is already facing unprecedented criticism from Palestinians over corruption, the Palestinian security service’s killing of social justice activist Nizar Banat, and the PA’s overall political ineptitude. And Abbas’ disapproval rate stood at 71 percent in October. Though the same poll gave Fatah a five-point lead over Hamas, this outcome was a significant decrease from Fatah’s 11-point margin in June. Barghouti’s release would thus strain an increasingly unpopular Fatah party.

Barghouti’s release would also bolster a Fatah breakaway camp, increasing the divide within Abbas’ party. Before the aborted Palestinian elections in May, three slates were set to divide Fatah’s base—Al-Kidwa and Fadwa Barghouti led one of them. Sensing defeat, Abbas canceled the elections three weeks before their scheduled occurrence. Fatah appears doomed to repeat its catastrophic electoral performance in the 2006 legislative elections, in which Fatah submitted multiple candidates for slots, dividing its support and handing Hamas an overwhelming victory.

When Abbas denied Hamas the opportunity to cement its position through ballots, Hamas opted for bullets—or rockets, to be more precise—against Israel to portray itself as the leader of the Palestinian resistance. In May, Hamas seized on tension in the contested Jerusalem neighborhood of Sheikh Jarrah and the ever-simmering restiveness at the Al Aqsa Mosque to claim its role as the leader of the Palestinian project. Hamas dubbed its campaign against Israel “Saif al-Quds” (Sword of Jerusalem) to portray itself as the protector of the holy city.

Hamas’ barrages of rocket fire provoked a war with Israel that improved the terrorist group’s prestige. A poll conducted in the West Bank and Gaza shortly after the conflict found that 72 percent of Palestinians believed that Hamas’ aim was to defend Jerusalem and the al-Aqsa Mosque. Similarly, Hamas’ posturing on releasing Barghouti aims to improve the group’s status as a liberator of imprisoned Palestinians.

David May (@DavidSamuelMay) is a senior research analyst at the Foundation for Defense of Democracies, where Abdel Abdelrahman is an intern. Follow FDD on Twitter @FDD. FDD is a Washington, D.C.-based, nonpartisan research institute focusing on national security and foreign policy.