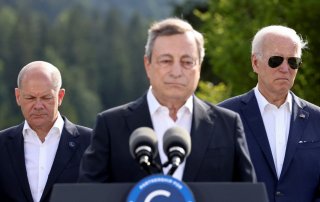 Mario Draghi’s resignation as Italy’s prime minister might seem like a minor event on the global stage. After all, Draghi will most likely lead a caretaker government through September until parliamentary elections are held. Moreover, leading figures on the Italian Right—which is expected to triumph in the forthcoming election—have expressed support for Ukraine since Russia’s invasion on February 24. A closer look at the Italian political scene, however, shows that Italy’s position on the Russo-Ukrainian War is likely to change significantly because of Draghi’s resignation. A change in Italy’s posture towards the war will be a serious blow to the West’s unified position in support of Ukraine.

Mario Draghi, the former head of the European Central Bank, was sworn in as Italy’s prime minister in February 2021 to lead a government of national unity. When Russia launched its full-scale invasion of Ukraine a year later, Draghi took a firm stance in favor of Ukraine and against Russia. Italy contributed to the reinforcement of NATO’s eastern flank, provided aid to Ukraine, and supported harsh sanctions against Russia even though Italy has historically had a robust trading relationship with Russia and is highly dependent on Russian oil and gas. The best indicator of Italy’s importance in the Western response to the Russo-Ukrainian War was Draghi’s visit to Kyiv in June alongside French president Emmanuel Macron and German chancellor Olaf Scholz.

Draghi’s resignation will likely fundamentally change Italy’s stance on the war and posture toward Russia. Current polling suggests that the Right is likely to triumph in the September elections. Leaders of Italy’s major right-wing parties have a history of support for Vladimir Putin. The League party’s Matteo Salvini has worn a t-shirt with Putin’s face on it and has called him “one of the best men in government in the world.” Georgia Meloni, head of the Brothers of Italy, has lauded Putin as a defender of “European values” and “Christian identity.” And, of course, Silvio Berlusconi has long been one of Putin’s best friends and supporters in Western European politics.

Even if a coalition of right-wing parties does not win outright in September, Italy’s position on the Russo-Ukrainian War is still likely to change. Historically, the Italian public has had a pro-Russian current and is divided on who is to blame for the war in Ukraine. Italy’s media has given Kremlin-friendly voices lots of airtime to defend Russia’s actions since February. Notably, the left-populist Five Star Movement ruptured recently over the Draghi government’s decision to send military aid to Ukraine.

To be clear, this does not mean that the next Italian government is likely to engage in full-throated support for Putin’s Russia given the brutality of its war in Ukraine. It does mean, however, that the Italian Right will enact policies that weaken Western unity against Russia. First, the next Italian government is likely to press Ukraine to negotiate with Russia to achieve an end to the war, even if it means Kyiv must concede territory. In June, Salvini announced his plan for a “peace mission” to Moscow (which he abandoned after criticism from center-left members of the government). If Salvini is a leading figure in a future Italian government, he will likely resume his peace overtures. Consequently, Italy will reinforce the “peace” party in the West at the expense of the current U.S.-led position that only Ukraine should decide what it is and is not willing to concede.

Second, a post-Draghi government is unlikely to support any additional sanctions against Russia, especially measures on oil and gas. Though neither are currently in favor of leaving the European Union (EU), the League and the Brothers of Italy have been vocally Euroskeptic and more critical recently of the government’s inability to get energy prices under control. Given that the EU requires a unanimous consensus before implementing sanctions, this means that Brussels will be unable to further ratchet up energy sanctions against Russia.

Third, the West can expect a future Italian government to decline to provide any new military aid to Ukraine. In June, polling showed that the Italian public registered the lowest level of support in the G7 for “opposing Russia militarily”—a position consistent with the country’s post-World War II pacifism. Without overtly supporting Russia, Italian officials will be able to argue that providing more military aid to Kyiv is just contributing to needless bloodshed.

Finally, a post-Draghi government is likely to focus more on threats such as terrorism in the Mediterranean and far less on Russia, which NATO emphasized in its recent Strategic Concept. The focus on terrorism and other threats from the Mediterranean is far more consistent with the Italian Right’s migration phobia than a concern with Russia. Italy’s position will reinforce the polarization between Eastern European countries focused on Russia and Southern European countries focused on threats posed by non-state actors.

The fall of Mario Draghi’s government and the probable shift in Italy’s policy toward the Russo-Ukrainian War suggests a general challenge for the West against Russia. In much of the West, outrage at Russia’s brutal invasion of Ukraine has begun to fade. Over time, the costs of the sanctions regime will weigh on the average person more than the emotional reaction to a distant war. Governments can defy public sentiment for a time. The West’s democratic political systems, however, put governments in power that represent the popular will. In Italy, this will most likely lead to policies that put less pressure on Russia and weaken support for Ukraine.

Jason Davidson is a Non-resident Senior Fellow at the New American Engagement Initiative at the Atlantic Council and Professor of Political Science at the University of Mary Washington. He is also the author of America’s Entangling Alliances: 1778 to the Present.