Has the Next Civil War Already Started? 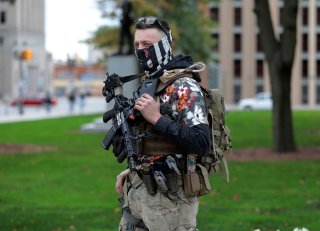 Protests, counter-protests, and armed violence fueled by white supremacy and far-right political extremism have spilled onto our nation's streets, into our classrooms, and across our social media feeds. This surge of extremism continues to threaten the public good in communities large and small.

“No one wants to believe that their beloved democracy is in decline, or headed toward war,” writes Barbara Walter, a leading expert on political violence, in her New York Times bestseller How Civil Wars Start.

But by some measures, the second American Civil War has already begun. And until the country recognizes this and takes the threat seriously, Americans cannot begin to address it with the gravity the situation demands.

According to the Anti-Defamation League, in 2021, “domestic extremists killed at least 29 people in the United States, in 19 separate incidents.” Motivated by grievances such as national identity and the “great replacement” theory, all but three of those murders were committed by right-wing extremists.

This might seem like a relatively small number when measured against the U.S. population of over 300 million. But when compared to one academic metric for civil war, it is startling nonetheless.

The Uppsala Conflict Data Program (UCDP), an authoritative source on armed conflict, defines civil war and one-sided violence as the deliberate use of armed force by any formally organized group resulting in at least twenty-five battle-related deaths in a calendar year.

When you look at the UCDP’s interactive map of North America, you’ll see events like the September 11 attacks and extrajudicial cartel violence. The emphasis is on formally organized groups—such as Al Qaeda, ISIS, and the Sinaloa Cartel—not individuals.

What isn’t included in the UCDP encyclopedia is the 2022 Buffalo supermarket massacre, where Payton S. Gendron specifically targeted an African-American community with a Bushmaster XM-15 rifle, killing ten and wounding three. His firearm was painted from stock to barrel with names like “Dylann Roof,” who killed nine African-American worshippers in a South Carolina church, and phrases like “here’s your reparations!”

Also not counted is the 2019 El Paso Walmart shooting, where Patrick Wood Crusius—motivated by the supposed “Hispanic invasion of Texas”—killed twenty-three people in the worst attack on the Hispanic community in U.S. history.

And excluded from the data are the ongoing incidents of trolling on websites like 4chan, 8chan, and Kiwi Farms, which have driven members of the LGBTQ+ community to suicide.

These murders won't be counted as battle deaths under most academic standards. And to be clear, this isn’t a critique of the UCPD’s research methods or coding parameters, which are focused on measuring acts of political violence that comprise low-level conflicts and full-scale wars. But what may seem like isolated acts of violence—perpetrated by lone gunmen and far-right groups—are part of a larger movement of domestic terrorism that has the makings of a burgeoning civil war.

Rather than looking at the potential for civil war only through the lens of formal armed groups, policymakers should highlight the growing number of casualties in the United States at the hands of a decentralized movement of white supremacy, ultra-conservative politics, and domestic terrorism.

I don't view this new civil war through the lens of conventional military action, with two armies exchanging fire on a grassy field. Instead, I see it through the CIA’s definition of open insurgency. Incidents in this campaign include mass shootings motivated by policy issues around race, sexuality, and immigration; the failed kidnapping of Governor Gretchen Whitmer by a paramilitary militia in Michigan; hit-and-runs against Black Lives Matter protesters; and, most notably, a planned insurrection.

However, the leaders and organizational structures behind these groups and militias—the Oath Keepers, the Proud Boys, and Patriot Front, for example––are often peaceful, speaking strictly from a legal perspective. They've intentionally distanced themselves from the frontline.

But so is the case in most guerilla wars. The tail is often wagging the dog, but only to build in a layer of plausible deniability. It doesn't make the leaders any less connected or culpable for the violence of their most devout followers.

Research from political scientist Ben Valentino on Cambodia, Nazi Germany, and Rwanda shows us that “a tiny minority, well-armed and well-organized, can generate an appalling amount of bloodshed when unleashed upon unarmed and unorganized victims.”

Rarely is mass death carried out by commanders and politicians. Instead, a handful of ordinary people, motivated by self-interest and opportunity, are often responsible for the bloodshed. Indeed, in his article “The Banality of ‘Ethnic War,” John Mueller estimates that during the Rwandan genocide, only 2 percent of the Hutu population was responsible for the overwhelming majority of the killing.

Shared ideology links all the perpetrators mentioned above, as well as many who weren’t. Their manifestos and social media posts appear to be inspired by the same ideas, literature, and fear. For example, The Turner Diaries, a novel linked to more than 200 deaths since its publication in 1978, and the French book Le Grand Remplacement, which is centered around the erasure of the white identity, are commonly referenced. The list goes on and on.

All of this reveals a pattern of insurgency that needs to be recognized and addressed outside of the existing metrics and definitions for civil war. One could argue the second American Civil War has already begun.

Niko Emack is a graduate student at Harvard University. His writing on the intersection of politics, culture, and identity has been published by The Boston Globe, NPR, and Foreign Policy Magazine.