America Can’t Turn Away From Counterinsurgency in Africa 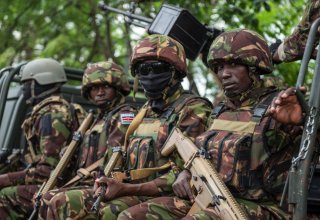 Terrorism is once again increasing, with Islamic extremists inching ever closer to their goal of establishing a caliphate in Africa. The Africa Center for Strategic Studies, a Pentagon analysis institute, reported this summer that terror attacks in Africa have increased by 300 percent over the last decade, with violent attacks doubling over the last three years. Due to the easing of Covid-19 restrictions and an increase in unemployment, Sub-Saharan Africa is becoming a “locus of terrorism.” “Deaths there from terrorism have risen by more than 1,000 percent since 2007, and almost half of all deaths from terrorism globally last year happened in sub-Saharan Africa, especially in the Sahel,” the Africa Center reports. Africa is also being hit the hardest by the effects of global warming, with rural and poor communities becoming even more vulnerable to the influence of extremist groups as they desperately seek any opportunities to support their families.

Last month, U.S. Africa Command (AFRICOM) reported that Al Shabaab is the “largest and most kinetically active al-Qaeda network in the world, and has proved both its will and capability to attack the United States.” Only a week later, Al Shabaab committed a massive attack in Mogadishu, killing over 100 and injuring 300 citizens.

With the spread of terrorism across over a dozen countries in Africa, it is becoming increasingly important to question how foreign countries may become further involved. This is exacerbated by a looming cold war between the United States, Russia, and China. However, countries like France and the United States that have had significant failures in Africa and the Middle East will no doubt be hesitant to carry out major counterinsurgency actions. For instance, in its involvement in Somalia, the United States has been very careful not to repeat the catastrophic events that occurred in 1993. Yet such military choices are proving to be counterproductive, leading to misguided shifts in strategy.

Approximately three-quarters of U.S. foreign operations between 1798 and 2018 were unconventional. Yet over the last few years, U.S. military strategy has shifted away from terrorism and towards inter-state strategic competition, particularly with Russia and China. Reducing counterinsurgency (COIN) operations significantly weakens the ability to establish an “American influence in unstable, strategic regions,” Alexandre Caillot writes. U.S. Army Capt. Justin Lynch warned in 2014 of terrorist groups taking advantage of this pivot away from counterinsurgency training and resources. “Numerous violent non-state actors are ready to take advantage of those shifts: Al Qaeda and myriad other groups remain active in Afghanistan and Pakistan, as do its affiliates in North Africa, Yemen, and elsewhere; Boko Haram in Nigeria and al-Shabaab in Somalia continue to engage their adversaries in pitched battle; and the Islamic State has grown at a frightening pace in Syria and Iraq. More radical groups will emerge.”

Lynch’s prediction has been proven correct by the spread of existing terrorist groups and the emergence of new ones in Africa. Most counter-terrorism actions have been reactionary and not pre-emptive, often resulting in the United States ignoring the root causes of radicalization. With U.S. and African Union (AU) withdrawals from countries like Somalia, terrorist groups have become even more emboldened. Additionally, Russian and Chinese propaganda campaigns throughout Africa have created wedges against the West. Anti-French sentiments promoted by Russia have resulted in deadly attacks and a full French withdrawal from Mali.

Russia and China have been utilizing their propaganda machines for years throughout Africa, destabilizing democracy, impacting international relations, and worsening conflict. Additionally, China’s likely military expansion on the continent has caused great concern in Washington regarding its impacts on trade routes used by the West and U.S. and allied military operations. A permanent Chinese military base on the Atlantic, which is rumored to be at the Port of Bata in Equatorial Guinea, would allow China to compete with Western commercial activities and could have a dangerous domino effect.

The United States should be focusing on partnership-building with African countries, as they show great economic potential. Col. Joe Bruhl of the U.S. Army views U.S. policies towards Africa as incapable of being proactive, with policymakers having a “strategic blind spot” that other major powers do not have. “Instead of a problem to be solved, China and Russia view Africa as an opportunity to be seized.”

Competition between Russia, China, and the United States will be furthered by the world’s reliance on African natural resources. This will likely lead to a resurgence in the Western presence in Africa and make the continent a battleground. Africa contains a third of the world’s mineral reserves and is a key supplier of resources with “crucial economic and national security purposes” for the United States, including minerals that are critical to U.S. national defense systems and are also sought by China.

Additionally, Africa is growing as an oil exporter. While the United States is not currently heavily dependent on African oil, complications in African oil exports have impacted the U.S. economy. For example, interruptions in Libyan oil in 2011 forced the United States to tap into its reserves, and instability in the Niger Delta has directly impacted U.S. companies. Moreover, the United States is incredibly vulnerable to disruptions in the global oil market, as was seen during the start of the Russo-Ukrainian War. American dependency on African oil is expected to increase exponentially. Competition will also increase as China’s oil dependency surges, “offering yet another facet to increasingly strong Sino-African economic ties (which expand China’s political influence on the continent),” as Grant Harris writes.

Furthering tensions on the continent are China’s so-called “debt-trap” policies throughout Africa. As Harry Verhoeven notes, “such “debt traps” are deliberately being created so China can force poor African states to vote with it in the UN General Assembly, support its positions on Taiwan or acquire valuable real estate in Africa that can be converted into military bases.” Whether such concerns are valid or irrational, it is evident that China’s ever-growing investment gains in Africa will no doubt sway some African leaders.

With a history of Western counterterrorism failures, growing anti-Western views, and the expansion of Russian and Chinese influence, support for terrorist groups in Africa is likely to increase. Additionally, with the spread of terrorism and an anticipated new cold war, U.S. involvement in Africa can be expected to escalate in the near future.

U.S. policy should further relationships in Africa and develop better strategies for engagement. However, with the military pivot away from counterinsurgency, the question is how the U.S. can expand its presence in Africa. Given its recent failures in the Middle East, Washington appears to be incapable of learning from its past mistakes.

COIN doctrines have barely changed from those developed in Vietnam, furthering the argument that the U.S. military consistently neglects the types of combat it is most often engaged in. Aaron Rapport, a lecturer at Cambridge, explains that conflicts in the distant future are examined through goal desirability versus objective feasibility in near-future conflicts, arguing that planners only focus on the invasion and do not forecast post-invasion outcomes, trapping them in a “repetitious cycle.”

Insurgencies in Afghanistan and Iraq had no “institutional memory” to refer to when deciding how to carry out COIN operations. As Adam Wunische wrote in The National Interest, “units trained to stop a Soviet tank advance through the Fulda Gap were now trying to train military units in a language they didn’t understand, with a group of recruits that lacked a common lexicon and identity, for a mission against a non-conventional adversary using conventional means, and all while being shot at.”

America’s reliance on security force assistance brigades (SFABs) to make up for gaps in counterinsurgency operations has also proven largely ineffective. Assisting foreign militaries in acquiring tactical proficiency is important but negates the necessary components for a nation to gain stability. Without improving governmental trust, which SFABs lack the capacity to do, long-term success is difficult to achieve. Because African nations lack such institutional confidence, relying on SFABs will lead to strategic failure.

While Africa has the same complications that Iraq had regarding corruption, government ineffectiveness, failed economic policies, and ethnic divisions, Africa poses even more obstacles. Gaining influence in Africa will be challenging due to multiple African countries being under the thumb of Chinese debt, the presence of non-state and state-sponsored groups like the Wagner Group, and an exorbitant youth bulge that faces significant unemployment rates and is more vulnerable to extremist recruitment. These challenges are why America must make diplomatic relations with Africa a priority and not turn away from COIN training.

Unless the United States alters its diplomatic and military strategies in Africa, it is inevitable that it will repeat past mistakes. Should the United States expand its military presence in Africa, it is likely that it will once again fail to understand foreign complexities and be incapable of establishing effective governments, therefore resorting to the practice of abandoning nation-building efforts. Such policies will worsen power and security vacuums, exacerbating the already surging spread of terrorism.