Has Russia’s Invasion of Ukraine Doomed the Dollar? 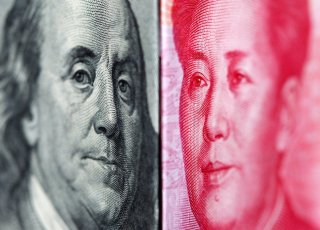 Russia’s invasion of Ukraine has undoubtedly ended the post-Cold War era. Although many countries have condemned Russia’s invasion, the majority of them have not sanctioned Russia. In contrast to the Western depiction of the Ukraine crisis as a confrontation between democracy and authoritarianism, these countries believe that the crisis goes well beyond the democracy-authoritarianism binary, potentially affecting their national security as well as global sustainability and peace. Food insecurity, internal displacement and refugees, threat of a spillover of war and the use of unconventional weapons endanger the most vulnerable of these countries. Yet the crisis has reshaped the international order and global realignments by offering states the opportunity to pursue their own self-interest without aligning themselves with a political camp. Broadly speaking, the crisis has divided the world into three camps: One led by the United States and NATO, one led by Russia and China, and wedged between these two camps is one in which most countries adopted neutrality.

These “neutral” countries act as political variables guided by their own self-interest. Many of them are friends or allies of the United States. But they are neither enemies nor adversaries of Russia and China on account of the Ukraine crisis or their authoritarian political systems. They are cognizant of the reality that at a time of global competition over scarce resources they can neither sanction nor go against Russia, the largest country in the world with the largest amount of resources, and China, the country with the second-largest economy and largest holder of foreign reserves in the world. Yet equally, they cannot damage their relationship with the United States, the most powerful country with the largest economy in the world. Consequently, their policies are dictated by their own self-interest free of the ideological binary of the Cold War. In other words, their policies do not and will not necessarily overlap with those of the United States. What else explains the refusal of Saudi Arabia, the UAE, Egypt, India, Brazil, South Africa, Argentina, and Indonesia, among other states, to tow the American line and sanction Russia into submission?

Significantly, many of these countries have seen the end of the post-Cold war era ushering in a new period characterized by multipolarity and multilateralism. They have been uneasy about America’s unipolar power since its unilateral invasion of Iraq in 2003. The Ukraine crisis and its ensuing ramifications for dividing the world, coupled with the virtual universal perception that American power is in decline following its debacles in Iraq and Afghanistan, only sharpened these countries’ determination to try to curb American global power by supporting multipolarity and multilateralism. In this respect, China is leading the way by supporting international organizations such as Shanghai Cooperation Organization—the world’s largest regional political, economic, and security organization—and BRICS as a counterbalance to Western economic, political, and security might.

Indeed, while the SCO looks to advance a new “democratic, fair and rational international political and economic order,” BRICS—an acronym for five leading emerging economies: Brazil, Russia, India, China, and South Africa—promotes a transition to a multipolar world. They seek to provide alternatives to the Western-dominated International Monetary Fund and World Bank through institutions like the New Development Bank. Significantly, these organizations’ influence is being enhanced by the admission of new countries; For example, Algeria, Egypt, Turkey, Saudi Arabia, Argentina, and Iran have either submitted formal applications or expressed their willingness to join BRICS.

Central to these developments is the attempt to weaken the American dollar as a prelude to weakening the overall global position of the United States. Fundamentally, the dollar is the underbelly of the United States. By examining economic patterns and trends, it is clear that many countries, some of which are led or egged on by China (and Russia), are reconsidering the use of the dollar as their major trading currency.

But since 2000, China has been trying to internationalize the use of its currency, the yuan. This effort has recently gained steam as NATO countries rallied around Ukraine, levied unprecedented sanctions against Russia, and showed public solidarity with Taiwan. Tensions in U.S.-China relations increased dramatically following U.S. House speaker Nancy Pelosi’s visit to Taiwan, virtually wiping out whatever goodwill or trust existed between the two powers. Meanwhile, sharing China’s views that the world today is undergoing a period of turbulence and transformation, many countries have been exploring ways to reduce their dependency on the American dollar as the major global trade and foreign reserve currency.

In June 2022, at the 14th BRICS summit, the international grouping probed developing a new international reserve currency. In March 2022, the Eurasian Economic Union (comprised of Russia, Armenia, Kazakhstan, Kyrgyzstan, and Belarus) reached an agreement on the need to develop a new international currency. Russia has already made the Chinese yuan its de facto reserve currency. In August, Iran declared that it started using its currency, the rial, and Russian rubles for trade with Russia. The UAE, which had been issuing bonds in U.S. dollars, began issuing bonds in their own currency, the dirham. In August, Egypt announced plans to issue more than $500 million worth of bonds denominated in China’s yuan. Moreover, Egypt has been doing bilateral currency swaps with China. In April 2022, the Bank of Israel added four new currencies (Canadian dollars, Australian dollars, Japanese yen, and the Chinese yuan) to its holdings. Israel’s foreign-currency reserves, which exceed $200 billion, have traditionally been made up of dollars, euros, and British pounds.

Most importantly, China has been strategizing the introduction of yuan-denominated crude oil futures and the payment for imported crude in its own currency rather than the U.S. dollar. In fact, China and Saudi Arabia have been engaged in active talks about Riyadh pricing some of its oil sales to Beijing in yuan. This has been a principal objective of President Xi Jinping’s recent visit to Riyadh in the second week of December. Welcomed with rose petals and red carpets aligned with monumental displays of flowers, Xi received glowing media coverage and a respectful and warm welcome from the Arab monarchy. He attended three summits: The first China-Arab states summit, the China-Gulf Cooperation Council summit, and the China-Saudi summit.

Xi’s message was clear. The Ukraine crisis has laid bare a world buffeted by turbulence and undergoing a radical transformation. As such, it falls on China, Arab states, and many other countries to shape the new era. His opening statement to the Arabs underscored the importance of carrying forward the China-Arab relationship grounded in solidarity and mutual assistance, equality and mutual benefit, inclusiveness and mutual learning, and jointly building a China-Arab Community with a shared future in the new era.

The underlying message to the Saudis and other Arabs was that China, unlike the United States, will not dictate, influence, or compromise Arab policies and prosperity. China and the Arab states will grow their relationship on the basis of respect, equality, solidarity, and non-interference in each other’s domestic affairs. Dozens of agreements worth billions of dollars were signed covering a wide range of sectors, including in the “fields of green energy, green hydrogen, photovoltaic energy, information technology, cloud services, transportation, logistics, medical industries, housing and construction factories.” One objective of the agreements was to jointly support Saudi Arabia’s Vision 2030 plan to diversify the kingdom’s economy through China’s Belt and Road Initiative, which is investing in many countries on a global scale as a means to endorse Beijing’s leadership in global affairs.

Folded in the spirit and letter of the agreements, and publicly pressed, was Xi’s call on Arab Gulf leaders to sell China oil and gas in exchange for yuan, which would establish the yuan as a major international currency and therefore weaken the U.S. dollar’s grip on world trade. It’s no secret that Crown Prince Mohammad bin Salman has been inching toward this new arrangement with China. To the keen eye, the Saudis’ grand reception of Xi had all the hallmarks of welcoming the liberator of the Arab Gulf from the manacles of American diktat!

No doubt should Saudi Arabia begin trading oil in yuan, the dominance of the U.S. dollar in the global petroleum market would suffer. Since the Nixon administration floated the dollar by suspending its gold convertibility, Petrodollars have been a pillar of strength for the dollar. At the same time, one cannot dismiss many countries’ repeated attempts to reconsider using the dollar. On an individual basis, these attempts may look harmless, but taken together they cumulatively constitute a bad omen for the U.S. dollar and, by extension, the U.S. economy.

To be sure, the appeal of using the American dollar internationally partly lies in the strength of American geopolitics, economic power, and viability. But this appeal has been losing some of its luster. From an overseas vantage point, U.S. national debt has surpassed a staggering $31 trillion, and American global power has been declining. It’s no coincidence that some of our allies or friends are considering using or holding different currencies in their trade and foreign reserves.