Has Trump Given Up on His Border Wall? 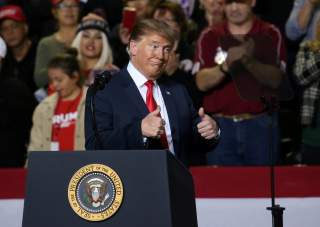 Immigration, more than any other issue, say most of Donald Trump’s past and current advisors, is why he is president. That’s the view from Stephen Miller’s office in the White House to Stephen Bannon’s house on Capitol Hill, from Tucker Carlson’s studio at Fox News to Ann Coulter’s penthouse in Los Angeles. A hard line laid out in Trump’s campaign announcement nearly four years ago secured his destiny. And Trump seems to agree—having been repeatedly cowed by strident media critics to his right, including Coulter and Carlson.

It’s against this backdrop that the incumbent navigates the waters of his re-election effort.

Trump hasn’t built the wall. Ahead of a presidential appearance in El Paso Monday, Brad Parscale—Trump’s campaign manager—tried his best at careful language, while addressing the crowd: it’s “finish the wall” now, not the 2016 refrain “build the wall.” Touting past construction, Sen. Ted Cruz said: “We saw in El Paso, where there was high traffic of illegal crossings, we built a wall and the crossing plummeted.”

Immigration hardliners aren’t pleased. Said Coulter: “RNC thinks we’re as dumb as Democrats.” She even threw in an attack on the administration’s continued focus on Iran, arguing the matter had little to do with Trump’s unique ascension to the White House: “Zzzzzzzzzzzzzzzzzzzzzzzzzzzzz Build the wall. Break ground today!”

In El Paso, the president continued to beat the corporate press like a drum, arguing obscurement of the incumbent’s achievements. “CNN sucks!” chants could be heard and Parscale chided the “Failing New York Times.” Trump said: “The media refuses to acknowledge what we’ve done and how well we’re doing it.”

But above all, Trump is continuing his recent gamble of triangulating to the center, ahead of his re-election bid. He may have mocked the restrained delivery of last week’s address—“that’s not what you want in El Paso”—but the content remained much the same. Two years in, he’s quietly, but surely attempting a rather naked tack toward post-partisanship. “It is not a partisan agenda,” Trump said. Message discipline will continue to be a built-in bug of this politician’s delivery, of course. Seconds later, Trump said: “Although some people say it is. Every once in a while it does become that way, right?” But he followed up saying his administration’s policy platform is “a mainstream, commonsense agenda of the American people.”

The president and his circle are gambling that another government shutdown is likely too politically costly and that his critics will have nowhere else to go. Trump announced on Tuesday that he was “not happy” with a new, proposed border security compromise that throws less than $2 billion—far less than the requested $5 billion—at the problem. But sending senators back to the drawing board could be a riskier course. Sen. Richard Shelby told reporters Monday: “We’ve had a good evening. We’ve reached an agreement in principle between us on the Homeland Security and the other six bills.”

Trump and his team seem keen to abandon defense in favor of offense. El Paso is the home base of former Rep. Beto O’Rourke, a likely heavyweight presidential contender. He joined a protest march against Trump’s rally Monday: “Walls do not save lives. Walls end lives.” Trump couldn’t resist. “Beto was defeated,” by Ted Cruz, Trump noted. Some observers argued that the president, by giving him attention, unwisely elevated O’Rourke to preeminence among Democratic contenders.

More than anyone, Jared Kushner, the president’s senior counselor and son-in-law, has run point on the government shutdown negotiations of early 2019. A source inside the campaign told me: “Jared isn’t going anywhere. Don’t mess with Jared and Ivanka.” It would seem to be emerging as something of a cardinal rule of engagement with 45. The placement of Kushner’s man Parscale in the cockpit of the re-election effort is evidence. Kushner opponents continue to get driven outside of advising Trump in a formal capacity.

Ret. Colonel Douglas Macgregor, who has been considered by the administration for national security advisor before, is floating a plan for large-scale militarization of the U.S. southern border that’s gained some steam in pro-Trump media. Macgregor told me Tuesday, on the bigger picture, “FDR told his supporters, ‘To reach our destination we must set sail, not drift’; If President Trump wants to secure the Southern Border, he must build the wall, not placate the Left. Americans will judge him in November 2020 by whether the wall exists, not by deals he made with the Left.”

But for now, for the hard-line right, immigration restrictionism is looking like a dream deferred.