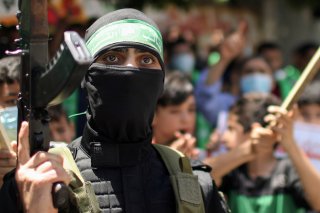 Hamas is yet again relying heavily on one of the most nefarious tools in the terrorist arsenal during its various rounds of conflict with Israel: the use of civilians as human shields.  Every time Hamas uses innocent civilians to shield its weapons and fighters from lawful attack, it commits a war crime, a violation of the Fourth Geneva Convention.

The use of human shields by terrorist groups is no mere technical violation of the law of war. Rather, it has been a pivotal contributor to the tragic loss of civilian lives in several recent conflicts, including those pitting the United States against the Islamic State and the Taliban.

The “Sanctioning the Use of Civilians as Defenseless Shields Act” (“Shields Act”), passed unanimously by Congress in 2018, requires the U.S. government to hold terrorist leaders accountable for using human shields. Former President Donald Trump never implemented it. President Joe Biden should do so now, starting with Hamas.

The use of human shields by terrorists is a major concern for the North Atlantic Treaty Organization.  In 2019, NATO’s Supreme Allied Commander Europe, Gen. Curtis Scaparrotti, called upon NATO member countries to increase their efforts to hold terrorists accountable for using human shields.

NATO’s Supreme Allied Commander said that he considered the use of human shields “an important obstacle for the effectiveness and success of current and future NATO operations and missions.” He explained that NATO’s adversaries, notably in the Middle East, “have not hesitated to use the prohibited practice of human shields” as it forces NATO troops “to choose between not taking action against legitimate military targets or seeing their actions, and the overall mission, delegitimized.”

The terrorist group’s extensive use of human shields in recent years is well documented. During this most recent conflict, Hamas has reportedly already been caught hiding a terror tunnel under a school, using civilian apartment buildings for military planning and operations, and locating weapons factories in the heart of densely populated civilian areas. The United Nations has called on Hamas to “cease immediately” these violations of the law of war.

Yahya Sinwar, the top Hamas political leader in Gaza, has made clear that Hamas has a deliberate policy of using Palestinian civilians as human shields.  Sinwar said Hamas has “decided to turn that which is most dear to us—the bodies of our women and children—into . . . a dam to prevent the racing of many Arabs towards the normalization of ties with the plundering entity.”  Sinwar has further boasted that the plan worked, as “our people have imposed their agenda upon the whole world,” forcing onto “the world’s television screens . . . the sacrifice of their [Palestinian] children as an offering for Jerusalem.”

Here in the United States, the “Shields Act” requires the president to submit to Congress a list of, and impose financial sanctions on, each foreign person involved in using human shields and authorizes similar steps in response to other terrorist groups using human shields.

However, despite strong evidence of terror groups extensively using human shields, the Trump administration never imposed any sanctions pursuant to the Shields Act. Biden should do so.  Designating and sanctioning Sinwar and other Hamas leaders for their use of human shields, which could lead to follow-on sanctions by the European Union, the United Kingdom, and other U.S. allies. Singling them out would also help counter the Hamas narrative, demonstrating that Hamas’ leaders are war criminals and helping educate the public about the use of human shields in advance of future conflicts elsewhere.

Specifically, imposing Shields Act sanctions on Hamas would be an important step toward countering the use of human shields against the U.S. and allied militaries by groups including the Islamic State and the Taliban. In his 2019 request to NATO member countries, the NATO Supreme Allied Commander said, “[I]t is essential that further measures be taken at the national level to maximize enforcement of the international legal prohibition of the use of human shields.” Scaparrotti specifically urged “imposition of sanctions” and “spotlighting of violations.” In light of the frequency and effectiveness of human-shields use against NATO forces, Scaparrotti said that such national measures “would decidedly become a major and substantial contribution” to NATO operations.

The latest use of human shields by Hamas should spur the U.S. government to finally start holding terrorist leaders publicly accountable for this brutal war crime.

Orde Kittrie is a senior fellow at the Foundation for Defense of Democracies and law professor at Arizona State University. He previously served for ten years as a U.S. State Department attorney. Follow him on Twitter @ordefk.. FDD is a nonpartisan think tank focused on foreign policy and national security issues.